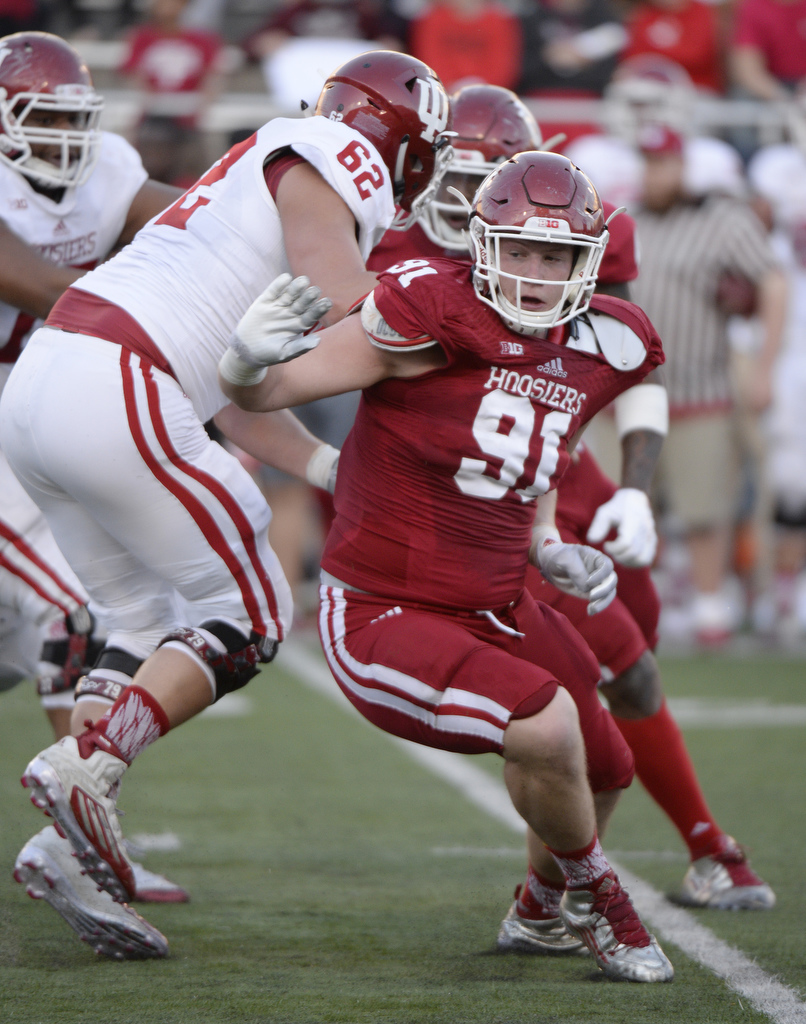 Today, we update the defense’s depth chart heading into Week 1.

Forgot to mention this in the offensive depth chart update (hat tip, Eric on the twitters), but for reference, the colors in the charts below mean:

Here’s what the projected depth chart looked like in spring ball:

Now, heading into IU’s first game week, it looks like this:

Again, these depth charts are based on (1) the published depth chart from before fall camp began and (2) my feeling for where things stand based on what coaches have said and the few media reports regarding practice that are out there.

Robert McCray is the big loss in this unit. It sounds like an injury will keep him out until midseason. An already inexperienced line didn’t need that. Otherwise, no real changes at the top. The group of Gooch, Sykes, Hoff, Green, Bowen, Robinson and Wilson should be the regular rotation. We’ll see if guys like Barwick and Meminger can finally break through and see the field. Also, while I didn’t put him on here, it’s possible true freshman Allen Stallings could become something of a pass-rush specialist.

No change to the starting two – Scales and Oliver are firmly entrenched. The big shift is Clyde Newton moving to running back. KW left open the possibility that he could shift back if necessary, but I wouldn’t count on it. One of the craziest aspects of this fall camp has been how little TJ Simmons has been mentioned. The guy is a three-year productive starter heading into his senior year and based on how much the coaching staff has mentioned him, you’d think he’s a walk-on. While I understand that his lack of lateral quickness limits him in Coach Allen’s scheme, I don’t think we’ve heard the last of Simmons. Absent an injury, he won’t start, and he’ll be lucky to play 40% of the time, but against the right opponent (Michigan State springs to mind), he can make an impact. Raekwon Jones and Dameon Willis are likely to see action as well. Chris Covington isn’t on my depth chart, but he should get on the field at some point too.

Some interesting moves here. Donovan Clark is gone, having never recovered from a serious back injury. Leon Thornton has been moved to safety, after moving to corner from wide receiver in the middle of the 2015 season. My assumption that South Carolina transfer Wesley Green would seize control of the corner spot opposite Fant has not exactly come to fruition. The last report had Ben Bach as the likely starter there, which is somewhat odd because he practiced at Husky in the spring, and he was listed as the starter at Husky in the last depth chart IU released back in July. I also guessed in the spring that Andre Brown would move to safety, but he’s still at corner. Expect that other corner position to be a revolving door until the staff finds someone that can limit big plays and occasionally make a few of his own.

Jonathan Crawford has one of the safety spots locked down. Let’s hope he makes the leap from promising yet inconsistent freshman to the consistent playmaker that this defense desperately needs. At the other safety spot, my guess is Chase Dutra’s the guy. My only hesitation comes from Dutra’s injury history. I know he was limited in fall camp so it’s possible he’ll need to prove himself to the new staff on the field. That could take some time. Cook and Fields should see action as well. I haven’t heard much about Kiante Walton recently, but I’d be surprised if he wasn’t in the mix somewhere.

At Husky, which for purposes of this post I’ll treat as a third safety position, I see it as a two-man race between Zeke Walker and Marcelino Ball. One of the big surprises of fall camp is Jayme Thompson’s failure to win the spot outright. Like Dutra, he was banged up early on so he may simply need some time to show what he can do. In the interim, I expect Walker and Ball to alternate.