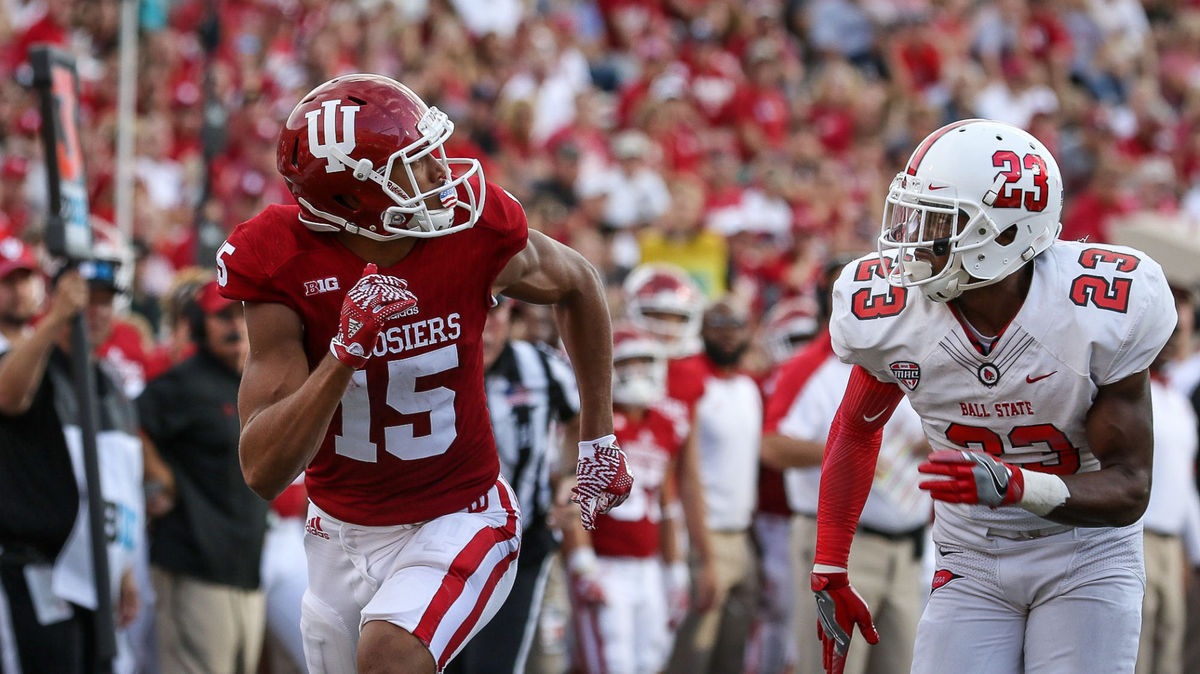 Participation Report[ref] Keep in mind, the chart above and any other charts in this post are limited to non-garbage time, defined here. So if something happened or someone played during most of the 2nd half, it’s not included.[/ref]

Last week, I read Chris Brown’s excellent piece over at The Ringer on the demise of Chip Kelly’s offense. I encourage you to do the same.  In discussing Kelly’s offense, Chris mentioned this about spread offenses:

“Defensive coaches with experience against spread offenses will tell you that the tight end often gives away the play.”

In particular, Brown talked about how Kelly’s teams often ran outside zones and sweeps to the side with the tight end (often with the running back starting on the opposite side of the QB) and generally ran inside zone away from the tight end. The same is generally true for IU’s offense.  More often than not, IU’s outside runs go the tight end side and inside zones go away.

Of course, Ball State was aware of this tendency, and it made stopping IU’s outside runs to the tight end side a priority. They set the edge at or behind the line of scrimmage and the entire defense flowed aggressively to the play side.  IU’s outside running numbers to the left are evidence of the Cardinals’ intent – IU ran two outside zone plays to that side, towards the tight end, and lost yards on each occasion.

A competent defense – even one at a talent disadvantage – can usually take away one particular aspect of an offense’s gameplan. But there’s a cost to committing so much to stopping one particular play, and it’s the job of the offensive coaching staff to force the defense to pay up.

One of the ways IU attacks a defense that is overplaying the outside run to the tight end is the quick toss or speed option away from the tight end. We talked about these plays a couple years ago after the Hoosiers used them extensively in the upset win over Mizzou.  These plays break two tendencies inherent in IU’s base run game: (1) the running back runs outside to the same side he starts on, rather than coming across the QB’s face to take the handoff and (2) the outside run is away from the tight end. While the quick toss and the speed option are different plays, the essence is the same – catch the defense leaning and slanting the wrong way and get the ball to the edge quickly in a playmaker’s hands.

IU only ran the speed option once, but it worked well. Lagow read an intentionally unblocked DE and quickly pitched to Devonte Williams.  RT Dimitric Camiel and RG Jacob Bailey moved to the second level, while slot receiver Mitchell Paige slid inside to pick off a linebacker. Here’s the clip:

Given the success of the only speed option IU ran, the obvious question is why IU didn’t try it again. I think the most likely answer is the coaching staff wanted to keep the gameplan as simple as possible. IU didn’t use the quick toss, a QB keep off the regular outside zone action, a play-action rollout away from the action or a reverse, all standard countermeasures that this coaching staff has used in the past – and will certainly use again as the season progresses.

One possible reason for this simplicity is the desire to hide parts of the playbook from future opponents. Another is to gain experience running the base offense.

And it’s possible to combat a defense overplaying the outside run within a basic outside zone play. With the defense flowing hard to the tight end side, there should be a cutback lane to the back side. It’s just a matter of the running back having the vision and decisiveness to make the quick cutback and the back side offensive lineman executing cut blocks.

Against Ball State, on an outside zone run to the right, Mike Majette looked for an early cutback lane and found it, courtesy of an excellent backside cut block by true freshman left tackle Coy Cronk. Have a look:

If Majette continued to run outside there, he almost certainly would have lost yards. Instead, he took advantage of the defense’s aggressiveness, benefited from a nice block, and made a huge, momentum-shifting play.

Bubble screens are back! Last week, I looked at Richard Lagow’s struggles in throwing the bubble screen against FIU. It sure seems like Rich & Co. made that a point of emphasis in practice and in the gameplan. In non-garbage time, Lagow completed 6 of 6 bubble screens for 128 yards (21 YPC), good for 52% of IU’s non-garbage time passing yards.[ref] Adding Nick Westbrook’s 43-yard deep post TD, 71% of Lagow’s passing production came on bubble screens and the one deep pass he completed.[/ref] Not all of the bubble screen passes were perfect, but Lagow’s timing and accuracy were much better than he showed in Week 1.

IU’s passing game with Richard Lagow at the helm is still a work in progress. Against Ball State, just about all he needed to do was execute bubble screens, something he couldn’t (or at least didn’t) do the week before. The fact that Lagow showed clear improvement in just a week’s time is a great sign moving forward. In the near future – possibly as soon as this week against Wake – he will need to convert some downfield throws in order to put points on the board. But for this game, we’ll take simple execution of a vital piece of IU’s offense.