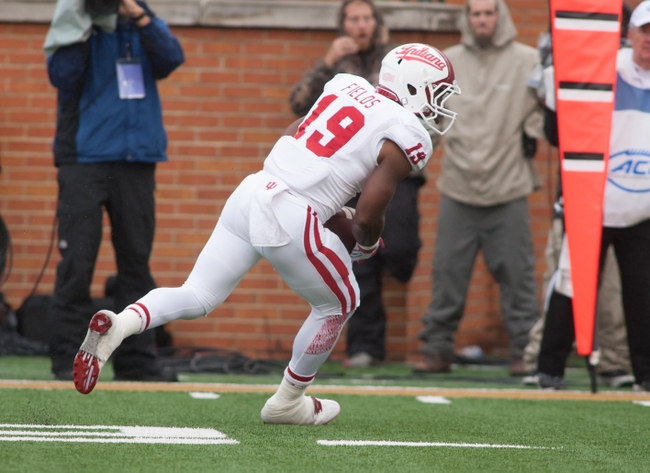 This week Wake Forest travels to Indiana without starting quarterback Kendall Hinton and most likely without starting running back Cade Carney.  However, both backup QB John Wolford and RB Matt Coburn have a decent amount of game experience.  Nevertheless, the Hoosiers are a touchdown favorite in this contest.

Now to the questions in our contest.

If you need a refresher on the rules, go here.

After averaging 4.95 points per scoring opportunity last season to rank 52nd nationally, the Hoosiers have stalled in 2016.  Thus far, Indiana is averaging just 4.27, good for 99th overall.[ref]As you can see, there’s not a ton of separation, but 0.6 points over 8 scoring opportunities is roughly 5 points a game fewer.  The national average last season was 4.67.[/ref]  The Hoosiers have settled for field goals, even missing one, at a higher frequency than last year.  Their opponent this week has been a classic, bend-but-don’t-break defense allowing a stingy 2.71 points per scoring opportunity to rank 8th nationally.  The Hoosiers did better against Ball State, but continued improvement is important heading into the Big Ten schedule.

Devine Redding has accounted for 55% of Indiana’s running back carries thus far. The primary non-Redding running backs of Mike Majette, Devonte Williams, and Cole Gest have 192 rushing yards on 38 carries.[ref]Alex Rodriguez had a garbage time carry against FIU.[/ref] Wake Forest has allowed just 80 yards rushing per game and ranks 15th defensively in rushing success rate and 69th in rushing isoPPP.

Last game we did Simmie Cobbs receiving yards so if Westbrook gets hurt, we’re shutting down the site.  It is still early, but Westbrook leads the Hoosiers in targets (15), catches (9), yards (203), and receiving touchdowns (2).  In the absence of Cobbs, Westbrook should continue to be relied on as Indiana’s primary receiver.

In last year’s contest, of the 80 Demon Deacon plays, 41 of them went for 0 or negative yards. This was well above the season long average of 35%. This year Indiana is holding opponents to no gain or a negative play 39% of the time. Obviously the majority of no gains come via incompletions. Wake Forest QB John Wolford has a career 59% completion rate.[ref]And therefore, a 41% incompletion rate.[/ref]

In his career, Wolford has thrown 26 interceptions in 646 total attempts. This equates to 4.0% of his attempts resulting in an interception. The IU defense counters with an interception every 5.2% of passes which ranks an unsustainable 15th nationally. The national average last year was 2.9% with Indiana coming in at 2.2%, 100th nationally.  Last year, Tony Fields had a pick-6 interception although that was off Kendall Hinton.

There are a lot of positives from the IU defense in the early part of the season. Sacks and quarterback pressure, especially from the defensive line, are not one of them. The Hoosiers have just 3 sacks on the year, half of the amount that they have actually allowed. While we thought Indiana might have some pass rushing trouble after losing Mangieri, Shaw, and Latham, we didn’t expect Indiana’s sacks allowed to increase to this extent. Meanwhile, Wake Forest comes into this contest having generated 10 total sacks while allowing 6.

The Demon Deacons have returned just 1 kickoff in each of their 3 games, ranking 121st nationally. Their 3 returns have averaged 21 yards per return. It’s clear they are perfectly content to start their drive at the 25 yard line.  Indiana has a touchback rate is 58%, ranking 29th nationally. When opponents do return against the Hoosiers, IU is allowing 18.6 yards per return and 46.5 yards per game.