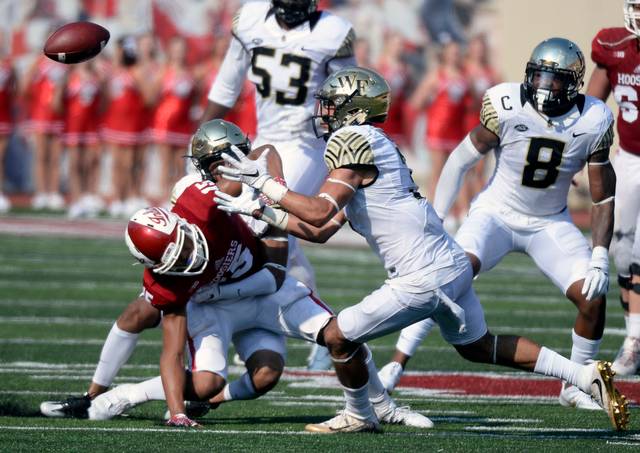 That’s what did it in this game.

The Hoosiers gained 259 more yards than Wake Forest, but gave it back with interception after interception.

The Hoosiers dominated the explosiveness of this game.  Starting off the first play when Richard Lagow stepped up in the pocket to find Nick Westbrook on what became a 75 yard touchdown pass, Indiana had a lot of big plays, particularly through the air.  In addition to the 75 yard pass, Lagow had completions of 24, 20, 20, 65, 50, 21, and 49.  Just over 65% of his school record 496 passing yards came on these 8 plays.

On the other side of the ball, Wake’s offense had very few big plays.  Their longest was a 33 yard pass play in the 3rd quarter.  Other than that the longest Wake Forest play was 26 yards.  For a defense that gave up big play after big play last season, that is encouraging.

Again, an area dominated by Indiana, particularly in the second half.  IU held a 50% to 28% advantage over the Demon Deacons in the last 30 minutes.  It was a game just begging Indiana to win, but unfortunately their mistakes proved too costly.

On the ground, Indiana struggled[ref]By Indiana standards[/ref] to run the ball consistently with just 33% of rushes going for 5+ yards.  Clearly the lack of Feeney and Camiel was felt.  Wake Forest was even less efficient running the ball with just a 26% success rate.  Only 20% of Wake’s rushes went for 5+ yards.  The Demon Deacons aren’t world beaters rushing the ball, but this was another encouraging sign for the defense.

We figured it might be rough and was it ever.  While Indiana got going with a touchdown on their first drive, their next 3 scoring opportunities ended in 0 points.  Indiana ended these drives with an interception, turnover on downs, and a blocked field goal.  Late in the 4th quarter, Indiana had another scoring opportunity end in 0 points following a Wes Rogers holding penalty on 4th and 1 that backed up the Hoosiers 10 yards.  Overall IU ended with 8 scoring opportunities which is good.  Unfortunately they were unable to finish their drives, constantly leaving points on the board.

On the other side, Wake Forest averaged 4.3 points per scoring opportunity over their 6 chances.  If Indiana allows just 6 scoring opportunities a game, they’ll be competitive in most every game.  That is, unless they give the ball away via…

Indiana was forcing turnovers at an unsustainable rate.  It was unreasonable to expect 3 turnovers a game.  IU did recover a potential fumble on the 2nd Wake Forest play of the game, but it was negated by a Ralph Green offsides penalty.

Against a team like Wake Forest, Indiana can overcome not forcing a turnover unless they TURN IT OVER 5 TIMES.  In terms of equivalent points[ref]http://www.footballstudyhall.com/2011/3/22/2063307/the-toolbox-offensive-ppp[/ref] without any turnovers, Indiana’s offense and defense played well enough to win by almost 23 points. However, the turnovers cost 23 equivalent points giving back any advantage that the IU offense and defense produced.  It was a crushing aspect of an otherwise solid Indiana outing.

The Hoosiers gave away their season turnover margin of +5 in a single game.