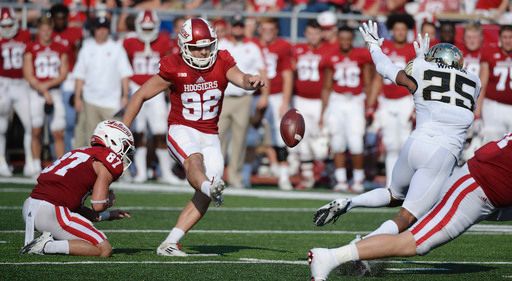 The Hoosiers may have lost on Saturday, but don’t write off the season yet.  Indiana still has very winnable games against Maryland, Rutgers, and Purdue.  They could definitely win at Northwestern or against Penn State.  Michigan State and Nebraska aren’t out of the realm of possibility.  So there’s a lot of season left.  Which means a lot of PJP Over/Under games left.

Congrats to 317Kevin, Dan, and CycloneCynergy for 6 correct picks on the week.

As noted in our WGOH, Indiana has struggled to finish drives. They consistently left points on the board, most notably the first interception on 3rd and goal from the 8. The next opportunity saw IU fall short on 4th and 1, which was followed up by a blocked field goal attempt. Indiana’s offense is too solid for these struggles to be so pronounced. However, they enter a critical stretch with games against Michigan State and Nebraska[ref] We’ll just ignore that one in Columbus…[/ref] where they must finish drives to have a chance at victory. The Hoosiers currently rank 110th nationally at 4.00 points per scoring opportunity.

After Indiana’s running backs averaged 43.5 carries the first 2 games, IU’s backs only ran the ball 29 times against Wake Forest. Due to the decreased workload, Devine Redding accounted for 62% of these carries, up from 53% heading into the game. Cole Gest had a 15 yard burst and Devonte Williams added an 11 yard carry. However, the combination of no lengthy runs[ref]Like Majette’s scamper against Ball State[/ref] and a decreased workload gave victory to the unders.

It took 1 play for the overs to be knocking on the door as Westbrook took the Richard Lagow pass 75 yards for a touchdown. He would end the game with 129 yards and 2 touchdowns. Westbrook, Ricky Jones, and Mitchell Paige were each targeted 12 times in this game. Westbrook continues to lead Indiana in receiving yards and ranks 14th nationally in receiving yards per game.

John Wolford threw 13 incompletions and had 2 passes of no gain out of 29 attempts. Additionally, Indiana had 2 sacks. However, Wake Forest ran the ball 45 times on a designed running play. Unfortunately only 5 times did Indiana hold the Demon Deacons to no gain or a loss. In last year’s contest, IU held Wake Forest to no gain or a loss on 6 rushes on only 16 designed runs. While it is extremely positive that Indiana held Wake Forest to a 27% success rate on the ground, it would have been nice to see some of those plays being made in the backfield. Beggars can’t be choosers I suppose.

Wolford entered the game with a career 4.0% interception rate. Given his 29 attempts, it would have been expected that we would have tossed 1. Unfortunately it was not meant to be as Indiana’s Richard Lagow ended with a 10.6% interception rate. On the season Lagow is sitting on a 5.0% rate. This ranks 117th nationally as a team. I’d expect that rate to decrease as the season progresses. Certainly a 4.0% rate seems reasonable and within the realm of possibility.

Indiana only had 2 sacks but that was on 33 pass plays.[ref]Wolford was able to scramble for gains on 2 of the plays.[/ref] This is right in line with the 2015 national average of a 6% sack rate. They would have had 3 sacks in this contest if not for a facemask penalty. The Hoosiers only allowed 2 sacks which isn’t terrible considering they had 49 designed pass plays. That is less than the 2015 national average.