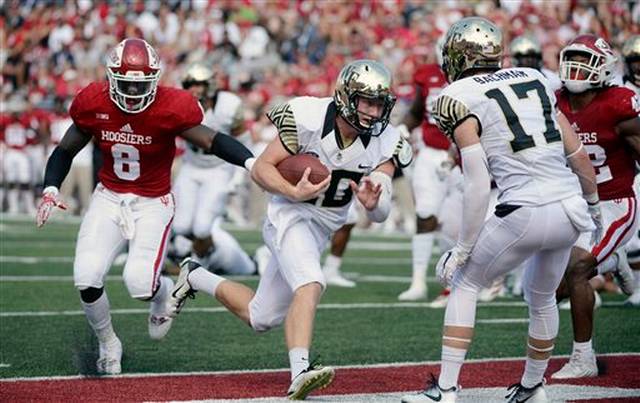 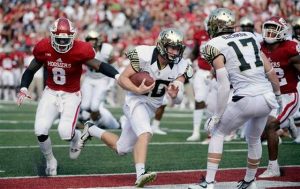 A tough loss to Wake can’t really be laid at the defense’s feet, but Tom Allen’s squad was far from perfect. Let’s take a look.

In the chart below, the little numbers next to each name denote the number of series in which the player appeared. To get credit for appearing, a player need only participate in one play on a given series, not every play.[ref] This change came at the suggestion of @Mike_Alley. Thanks Mike![/ref] For reference, there were 14 defensive series.

Per usual, a few notes on playing time:

Pickin’ On The Kid

New week, new chart. The chart below tracks instances in which a defender is clearly covering a specific receiver and that receiver is targeted.  Quick-hitting wide receiver screens and dump-offs to the running back are generally not included. 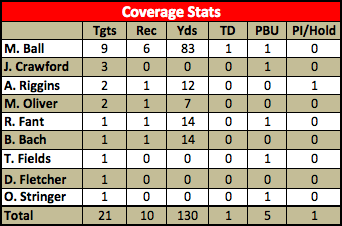 This chart lays bare a key part of Wake’s gameplan: attack Marcelino Ball, IU’s true freshman safety/LB hybrid “Husky”, through the air.  Ball was targeted 9 times – the other 9 guys that appear in the chart were targeted a total of 12 times. Wake knew that more often that not, Ball would be responsible for any deep or intermediate routes run by the slot receiver to the field (wide) side of the field.  And while Wake succeeded to a certain degree – and definitely did better than they would have done targeting Fant’s man 9 times – I maintain Ball wasn’t really exploited here.

Pretty good coverage there, including a head-turn at the last second to knock the pass away and decrease the odds of a penalty. If Marcelino just did that every time, offensive coordinators would find someone else to pick on.

Later in the first half, Ball gave up Wake’s only passing TD of the day on a post (literally) route:

Wake’s slot receiver, Chucky Wade, gave a little out fake and Ball bit just enough to create separation. The ball was perfectly placed by Wolford and Wade kept a foot in-bounds. Ball recovered sufficiently to give Wade a shove, but it wasn’t enough to dislodge the ball. While this wasn’t good coverage by any stretch, it still took a near-perfect throw and a great catch to beat him.

If you paid attention to Ball’s first two games as a Hoosier, it shouldn’t surprise you that he jumped at the bubble screen action. The guy lives to blow up bubble screens. Unfortunately for Ball, this was a fake bubble, with his man faking the block and running a wheel route up the sideline. Marcelino is well out of position after the fake, but Wolford under-threw this one. Ball recovered well and again, turned his head and found the ball. He just couldn’t bring down the jump ball. Once again, it took an amazing catch by Tabari Hines to beat him.

Ball is a true freshman playing an extremely demanding position. Wake will not be the last team to try to take advantage of him. MSU’s RJ Shelton, any number of robots on The Ohio State Football Machine and Nebraska’s Jordan Westerkamp will all pose enormous challenges.  Undoubtedly, Coach Allen has some schematic tools at his disposal to make Ball’s life a little easier, if he thinks it’s necessary. All told, while his coverage skills aren’t a finished product, Marcelino Ball’s entire defensive performance (when you factor in his run-support and pass rushing skills) has still been a net positive for this defense.

One Key Series, 1st Half Edition

Although Wake put together five scoring drives, two in particular stuck out to me as damaging to IU’s chances. The first came at the end of the 2nd quarter. Wake led 14-7 and had just blocked a Griffin Oakes’ field goal attempt. With under three minutes to go in the half, Wake faced a 3rd and 3 inside their own 30. If IU stopped the Demon Deacons on this 3rd down, the Hoosiers would have plenty of time to put together a scoring drive of their own to end of the half.

Unfortunately, what appears to be a blown run-fit by one of IU’s best defensive players kept the drive alive. Wake ran a simple inside zone-read, a play they ran over and over against IU. The Wake linemen stepped to their left, the back started towards the line at a diagonal from right to left, while Wolford had the option of pulling the ball and running right. In total, Wake had six blockers available, and IU, with Marcelino Ball blitzing, had seven defenders in the box. So the numbers favored IU. Now watch the play:

One of the goals of an offensive lineman on an inside zone play is creating vertical displacement along the defensive line – essentially, pushing the defensive line back. This creates cut-back lanes. Here, DE Greg Gooch was knocked off the line a few yards by the backside tackle. Still, Gooch more or less maintained his gap responsibility, between the tackle and guard. Likewise, weakside LB Tegray Scales didn’t quite attack the line of scrimmage like you might prefer, but he closed his gap between the backside guard and the center. The blitzing Marcelino Ball drew the block of the H-back, but still maintained outside leverage and was well-positioned to stuff Wolford if he opted to keep.

My strong suspicion is that Marcus Oliver is the problem here. Based on how he moved left at the snap and how Gooch slanted inside, I believe Oliver was responsible for the gap between the tackle and H-back. Oliver’s movement indicates he was concerned about Wolford keeping and moved too far outside, leaving a hole to the inside that Colburn hits on his way to a big gain. There was no one to block Oliver, but Wolford’s earlier success on the zone-read, and Oliver’s anticipation of the keep took him out of the play. If Oliver stays inside and fills his gap, it is very likely he makes the stop short of the 1st down. Instead, Wake picked up that key first 1st down of a drive and away they went.

One Key Series, 2nd Half Edition

The other particularly damaging drive came at the end of the 3rd quarter, right after IU cut Wake’s lead to 6 at 27-21. A stop of any kind would have kept IU’s momentum going. A turnover would have built that momentum in a major way. Sure enough, John Wolford gave IU an opportunity for an interception on the first play of the drive:

Safety Tony Fields’ coverage on Wake TE Cam Serigne was good, and Wolford’s throw wasn’t. Perhaps Tony found the ball just an instant too late and that prevented him from getting his other hand to the ball. If he catches it, IU takes over at its own 40, poised for another scoring drive.[ref] Or maybe another interception, to be fair.[/ref] As it was, Wake kept the ball…and started the Great Penalty March. Obviously, it’s completely unfair to blame Tony Fields for the rest of that drive, but man, that was a chance to make a play.

Back to those penalties. Holy hell. On Wake’s 12 non-penalty plays on the drive, they gained 30 yards. Five of the 12 gained 1 or fewer yards. That’s pretty good defense. But of course, Wake also picked up 45 yards on 4 penalties – and that doesn’t even tell the whole story. A sack resulting in a 15-yard loss turned into a 15-yard gain on a facemask that absolutely would have been of the 5-yard non-intentional variety under the old NFL rule. A rough, rough, 30-yard swing[ref] It’s not clear to me that a facemask like that shouldn’t be a spot foul. On offense, a holding call 30 yards downfield doesn’t take the ball back to the original line of scrimmage and then subtract 10 yards. It’s from the spot of the foul. Someone explain this to me.[/ref]

Incredibly, it’s possible that wasn’t the most damaging penalty on the drive. That award could go to a questionable defensive holding penalty on A’Shon Riggins that turned what would have been an incompletion leading to 4th and 15 into a 1st and 10 inside the IU 30.

(In the interest of fairness, I should note that Tegray Scales could easily have been called for targeting on a hit on Wolford during this drive. It wasn’t really a bad hit – and I think he narrowly avoided helmet-to-helmet contact – but I’ve seen much less called as targeting over the past few seasons. So it’s not like the refs didn’t throw IU the occasional bone here.)

And Finally, Some CHARTS 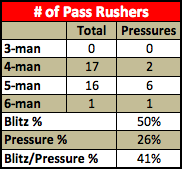 Takeaway: Lots of blitzing (including IU’s first 6-man pressure of the season) and a decent amount of pressures, with 9 on 34 dropbacks. The “blitz/pressure %” is new to my charts and, as you might expect, it measures the percentage of blitzes that resulted in a “pressure,” a hurry, QB hit or sack. 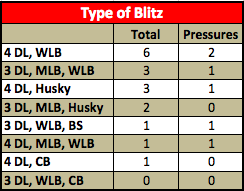 Takeaway: Coach Allen got a little more multiple in his blitzing in this one, with seven different types (at least). For the first time under Allen, both linebackers blitzed at the same time, a frequent Brian Knorr blitz. Also, Allen brought a safety on a blitz for the first time this season.

Takeaway: Scales leads the way in pressures, while IU’s defensive ends are still struggling a bit in this regard, with only three pressures. 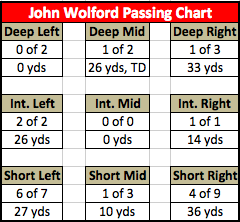 Takeaway: That doesn’t look like the passing chart of a winning quarterback…except for the fact that it doesn’t include any “INTs”.

Takeaway: Missed tackles weren’t much of a problem against Wake.

Takeaway: Wake doesn’t like to run outside. And IU wasn’t bad, but as discussed above, a few key mistakes accounted for Wake’s limited rushing success.