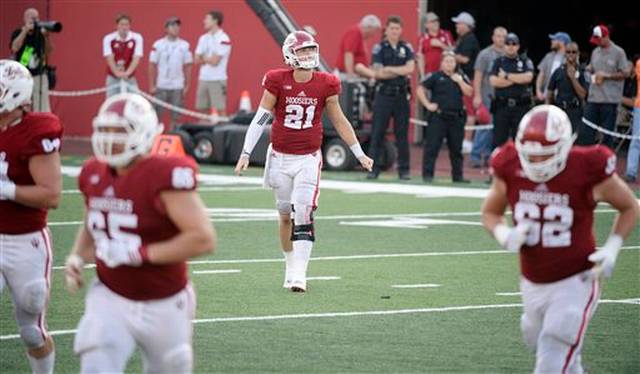 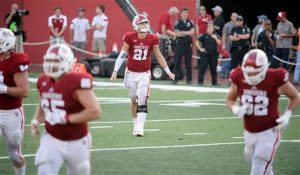 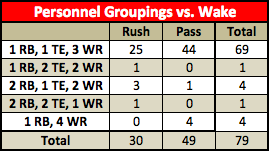 How about that balance?? Ok, well maybe “right side struggles just like the left side” wasn’t exactly the way we hoped balance would be achieved. Joking aside, the IU run game – and really, the entire offense – can’t function when it is picking up less than 4 yards per carry on outside runs.  It’s no coincidence that IU struggled to run outside when it only ran one non-zone-based outside run all day. Usually, IU’s pin-and-pull and OG sweeps (part of the “gap” category in the chart below) are consistent yard-producers. Without Dan Feeney and Dimitric Camiel (and probably also due to something Wake was doing), the Kevins clearly didn’t feel comfortable running them.

Also, Devine Redding tacked on 47 rushing yards in the last 8 minutes of the game when Wake was content to let him rip off 6-10 yard chunks. Without those yards, a bad day on the ground would have been even worse.

Because I assume Kevin Wilson reads this every week, we have to talk about his new favorite toy: Tyler Natee. In case you weren’t paying attention last Signing Day or during fall camp, Tyler Natee was a 280-ish lb high school “quarterback” in Texas. I put quarterback in quotes because it was mostly wildcat stuff, but the important thing is the guy is incredibly powerful with nimble feet. Coach Wilson went down to Texas, fell in love, and hasn’t stopped talking about Tyler since.

In light of Tyler’s unique skillset and his coach’s infatuation with him, it was only a matter of time before Natee saw game action. Honestly, I’m surprised Kevin had the restraint to wait two whole games before busting him out. So on 4th and 2 inside the Wake 30, Natee entered the game. It didn’t go as planned…

The presnap design was clever: Natee and Devonte Williams flanked Lagow in the shotgun. Lagow went up the line to give instructions, as he always does and then just continued to motion out to the right. Natee shifted over so he was directly behind the center and took the shotgun snap. And that’s when things went wrong. Natee and Williams ran an inverted veer, where the back runs across the QB’s face as if he’s running a normal outside zone. The QB has the option of handing off to the back or keeping it himself and running off tackle to the same side. Usually, the QB is reading a playside edge defender. I’m not sure if Tyler was actually reading anything or if this was a keep for him all the way, but it sure looks like Devonte would have easily picked up the 1st down and possibly much more if Tyler had handed it off. Instead, he kept it and two Wake defenders stonewalled him a yard short of the 1st down.

Thankfully, that wasn’t the last we would see of Natee. Later in the 2nd quarter, he lined up as a fullback to Lagow’s left in the shotgun, with Williams behind the QB in the pistol. Natee delivered a nice block on an outside zone play:

Finally, Natee got another shot to tote the rock. 2nd and goal on the 1, similar formation as the last time, with Lagow motioning out to the right, but this time Clyde Newton was lined up to Natee’s left. The play was simpler as Natee just took the snap and followed Newton and some overpowering blocking by the left side of the line right into the end zone. 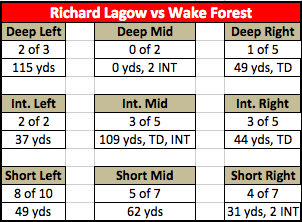 Don’t worry, I’m not going to make you watch all of Richard Lagow’s interceptions. It was hard enough to watch them the first time. I’ll just say that not all of them were entirely his fault. Obviously, he’ll have to cut down on interceptions if IU wants to make a bowl game.

On the bright side, Rich made some throws against Wake that we hadn’t seen him make before. Throws like this:

And this one too: