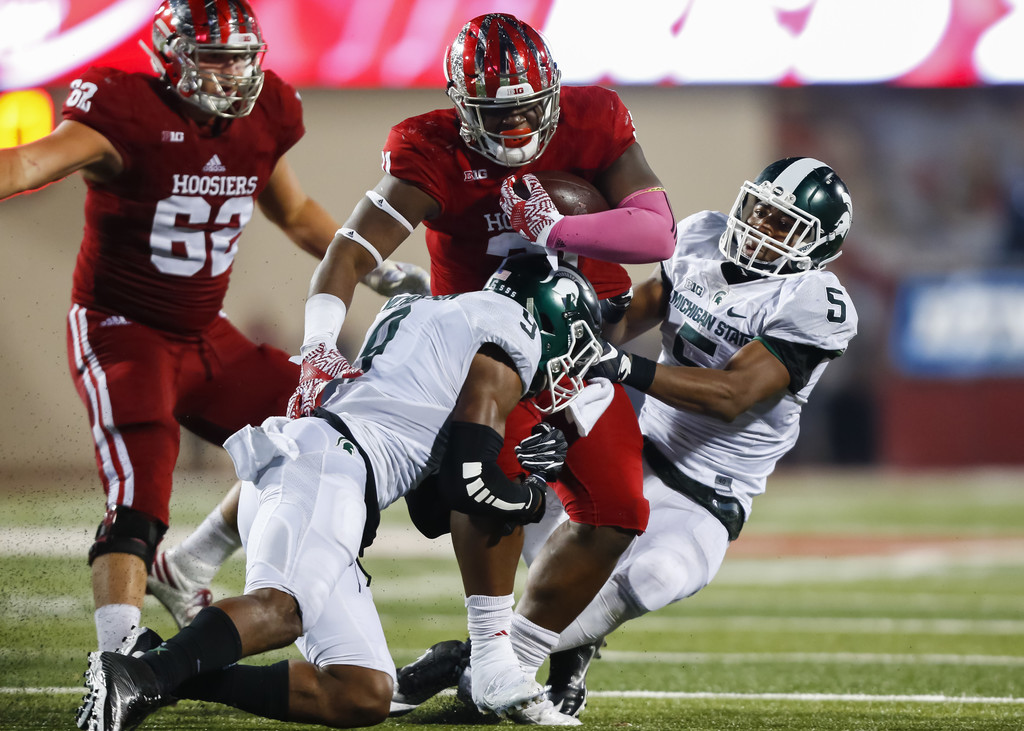 It wasn’t a great week for many of our contestants, but really…who cares.  Indiana knocked off the Spartans.

The only time I noticed Patrick in the game was on the Tyler Natee pass attempt. He was also in the Wake Forest game on Natee’s 4th down rush that was negated by a penalty.   It is clear that anything IU receives from Patrick this season will be icing on the cake. Fortunately for Indiana, the trio of Jones, Westbrook, and Paige has been outstanding and the running back depth has remained deep.

3. Most consecutive pass attempts by Richard Lagow without an interception – Over/Under 19.5 – Actual 14

Richard Lagow tossed one interception on the day on an overthrow to Mitchell Paige. While it was overthrown, it was also a nice play by Vayante Copeland to adjust and make the pick. The interception came on attempt #12.  Following the pick, Lagow would go 9 of 14 for 200 yards and 2 touchdowns and no interceptions.

Indiana allowed an 86 yard pass, the longest play they’ve allowed this year. But on the ground, Sparty’s longest rush was 24 yards. Indiana is one of 12 schools that has not allowed a rush of 30+ yards this year.

Overall Michigan State had a success rate of 38.2% which was lower than IU allowed in all but 4 games last season. It was also the lowest rate that Indiana has allowed this year. The Spartans came in very run heavy on first down and actually mixed it up a bit with rushes on just 17 of 32 first downs. However, when they did run the Hoosiers were ready, limiting Michigan State to just a 29% success rate. Once Indiana could knock Michigan State off schedule into obvious passing downs, the IU defense held the advantage. The Hoosiers held MSU to just a 28% success rate on passing downs compared to 45% on standard downs. That’s the blueprint for stopping Michigan State and credit Indiana for following through.

For 38 pass plays, Michigan State was able to avoid allowing a sack. Then on 2nd and 8 in overtime Patrick Dougherty was able to get to Tyler O’Connor. That forced another passing down, 3rd and 11, where Nate Hoff was able to make the sack. While Michigan State actually passed more on standard downs than usual, 19 of 47 times, both of Indiana’s sacks came on passing downs. Indiana now has a standard down sack rate of 6.0%[ref]National average is 5.0%[/ref] and a passing down sack rate of 5.3%.[ref]National average is 8.0%[/ref]

On and off the field, it hasn’t been a great year for Indiana kickers. Griffin Oakes is clearly in a funk and despite the reliability of 2014 and 2015, it is hard to count on him currently. Oakes missed a 50 yard field goal, 40 yard field goal, and a 33 yard field goal that was negated by a penalty.