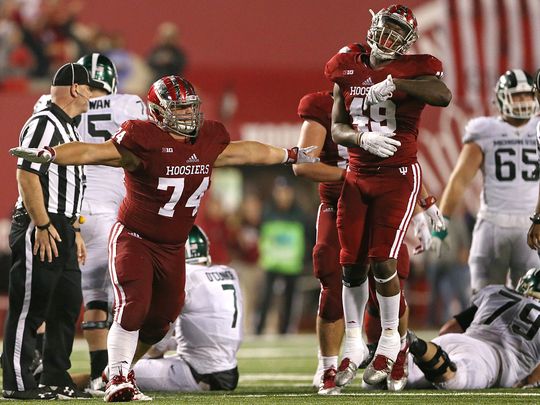 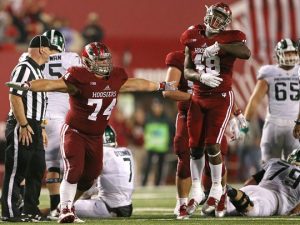 Aside from a few breakdowns, Tom Allen’s defense turned in a strong performance against MSU. Let’s take a look in this week’s Defensive Film Study.

Let’s Get The Bad Part Out Of The Way

As good as the defense was against Sparty, there were a few breakdowns that were somewhat reminiscent of defenses past. The first was RJ Shelton’s 86-yard TD catch and run. Check out the video and focus on the boundary corner Ben Bach and the boundary safety Tony Fields:

The first thing to note about this play is that there are only two receivers in the pattern: Shelton, who runs a skinny post, and Monty Madaris, who runs a dig route.  IU only rushed 4 here so in essence, IU had 7 defenders to cover 2 receivers. But Spartan QB Tyler O’Connor executed a good play-action fake, which drew Tony Fields up.  Without the fake, I’m guessing Fields would have provided deep support to Ben Bach. Once Fields realized that it wasn’t a run, he turned and sprinted back, but Shelton was already by him. That being said, Bach bears some blame as well because Shelton ran right past him, and nothing Bach did suggested that he was only responsible for a short zone (such that he would be expected to pass off a receiver running a deep route to a safety). It’s also possible that a nagging injury impacted Bach here. He clearly had some sort of brace on his right arm/shoulder. In any event, not the IU secondary’s best work.

Two quarters later, the secondary broke down again, and the result was another MSU TD:

Here, O’Connor had his choice of two wide open receivers. A’Shon Riggins let Madaris go after reading run, which might have been a mistake, but he also may have only had short zone responsibilities. Tony Fields let Madaris and Delton Williams go right by him, and I’m almost positive he was responsible for one or the other – or at least a deep zone to that side. Jonathan Crawford probably should have shifted to the middle of the field pre-snap because there were no eligible receivers to the field side and Fant and Covington was already over there in case a running back leaked out. It’s possible he could have helped. Tegray Scales is another suspect here, as he might have had some responsibility for following Williams out of the backfield.

On the other hand, you have to give MSU some credit here. This was clever play design and although the initial execution left something to be desired (Shelton came in motion and almost got hit by the snap), I would argue that the awkward timing at the snap actually added to IU’s confusion in defending it.  And really, if IU is going to blow coverages on two receivers, why not knock them out on the same play???

Dutra was in the right spot there, had outside leverage, tried to engage Price and Price just shrugged him off.[ref] Not even close to offensive pass interference though, from what I can see.[/ref]  Dutra didn’t get fooled, which you might classify as a mental error; he just had a physical failure, which happens.

When Tom Allen was hired as IU’s new defensive coordinator back in January, one of the big storylines was the impending switch from Brian Knorr’s 3-4 to Allen’s 4-2-5. Of course, there are significant differences between the scheme and philosophies of Allen and his predecessor, but in reality, Knorr’s defense wasn’t pure 3-4 and, as expected, Allen’s defense isn’t always a 4-2-5.  In reality, it is difficult – and often unwise – to play just one defensive personnel grouping regardless of opponent.  Coach Allen showed some of his other looks against Michigan State.

First, whenever MSU utilized a fullback, IU deployed backup MLB Chris Covington as an additional outside linebacker in place of the Husky.  This wasn’t a major change for Covington because just last year, he was an “SLB” in Knorr’s system, which was an outside linebacker that lined up to the field side, similar to the Husky role. And Covington rewarded his coach’s schematic flexibility by turning in the best performance of his career, with plays like this:

That was a key 3rd and 2 midway through the 4th quarter, with all the momentum on IU’s side following 14 unanswered points. Covington’s tackle built on that momentum. This was another tricky play design from MSU, with the guards pulling to the left, while the play was actually a quick toss to the right with the right tackle and fullback leading. Covington attacks the line of scrimmage at the snap, sees the pitch, quickly reroutes and with a little help from Rashard Fant to keep Scott inside, makes the tackle for loss.

The question for Coach Allen going forward is how you use Covington against opponents that don’t utilize heavy sets like MSU.  The most likely scenario is he will shift back into his reserve role at MLB. At the very least, this performance should give Covington and the coaching staff confidence in his abilities

Allen’s use of Covington wasn’t the only example of schematic flexibility.  On obvious passing downs, Allen deployed just three down linemen and dropped the weakside defensive end (Nile Sykes, Greg Gooch or Omari Stringer) into a more traditional linebacker alignment.  From there, the DE could either blitz or drop into coverage. Here’s a clip of Nile Sykes rushing the passer from this alignment:

Here’s a clip of Greg Gooch dropping into coverage after feigning a blitz:

In addition to being an effective alignment from which to rush the passer and defend the pass, this alignment also takes advantage of the 3-4 personnel that Coach Allen inherited, guys like Sykes, Gooch and Stringer who are a little undersized at DE, but bring real athleticism to the table.

Takeaway: The big news here is five hurries from defensive ends, IU’s highest total on the year from that position. 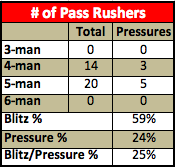 Takeaway: Coach Allen continued his heavy use of 5-man pressures, without any use of more aggressive 6-man blitzes. 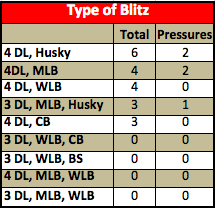 Takeaway: IU used 5 different blitzes against Sparty, with expanded use of traditional 4 DL and one linebacker or defensive back blitzes, rather than dropping a DE and bringing 2 back seven players.

Takeaway: The IU defense only missed five tackles, which is a significant accomplishment against a team with a stable of power runners like Michigan State. Interestingly enough, 3 of the 5 missed tackles came on one LJ Scott run in the 3rd quarter.

Takeaway: That chart on the left looks pretty good for everyone except poor Ben Bach. Also, it should be pointed out that Rashard Fant’s numbers were enhanced by two key drops by Spartan wide receivers. With one big exception, Tyler O’Connor wasn’t able to hurt IU down the field.

Takeaway: The rush defense had a lot of good moments, but there were some weak points too. In particular, allowing over 5 yards per rush on outside runs is a little worrisome, especially heading into a game against a team stocked with elite speed.  Expect Ohio State to test this defense laterally early and often.