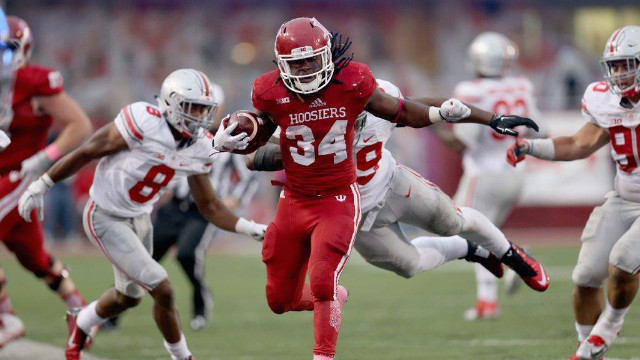 Hey guys.  It’s Ohio State week.  Where pretty much anything that happens, MINUS INJURIES, doesn’t matter.  It doesn’t take away from the fact that Indiana just knocked off a ranked team, has an improved defense, has an offense yet to meet its potential, and is in a great position to make a bowl again.

The Hoosiers are tied with Miami (OH) for the fewest rushing touchdowns in the nation with 2. That is a far cry from last season when Indiana ranked 38th nationally with 27 touchdowns. Unfortunately this may not be the best weekend to get back on track. Ohio State is the only team that has not allowed a rushing touchdown all season. They rank 7th in rush defense S&P+ whereas Indiana’s rush offense ranks 51st.

Opportunity rate measures the percent of a team’s rushes that go for 5+ yards. The Buckeyes lead the nation at 54.3%[ref]Compare that to Indiana’s opportunity rate of 40.1%.[/ref] Even against Oklahoma their opportunity rate was 53%. Those are some major chuck plays. On the other side, Indiana has done quite well in slowing down the opponent’s rushing game. The Hoosiers are 15th nationally in opportunity rate at 31.2%. That is a huge improvement over last year’s 37.3% and one of the reasons, along with fewer big plays allowed, that IU has allowed 56 rushing yards per game less in 2016.

While the Indiana offense has struggled in this area, the Buckeyes have had no such troubles. Ohio State has averaged a mind-boggling 6.71 points per scoring opportunity, scoring a touchdown nearly each time. This is probably why OSU kicker Tyler Durbin has only attempted 4 field goals. Indiana’s defense has been solid in not breaking, averaging 4.35 points per opportunity to rank 49th. However, it will be a challenge to slow down the juggernaut. If the starting average field position over/under could be decided by a forced turnover in Ohio State territory, this one could come down to a forced turnover deep in Buckeye territory.[ref]Attn: Marcus Oliver[/ref]

Ohio State tops the FBS with a 57% 3rd down conversion rate. They are dominant on standard downs with a 66% success rate[ref]Ranking 1st again…[/ref] but have managed just a 28% success rate on passing downs. Therefore, if Indiana can force Ohio State into 3rd and longs, it will probably go to the overs. But if Ohio State can get down into 3rd and 4 or shorter, Indiana could have trouble getting off the field. Indiana has been great at getting off the field, with a 34% 3rd down conversion rate allowed. The Hoosiers have allowed a 3rd conversion on 45% of standard downs and a 31% rate on passing downs.

Ohio State Cameron Johnston isn’t even listed in the punting ranks because he’s only punted 11 times all season. As Kevin Wilson said, why would you go to Ohio State if you’re a punter? Regardless, Johnston has averaged 50.64 yards per punt which would rank 1st if he had more punts. Obviously as a team, the Buckeyes are #1 so far. Johnston averaged 44 yards as a freshman, 45 as a sophomore, and 44 as a junior.