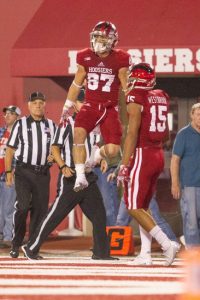 It took a little longer than any of us would have liked, but the offense eventually got rolling against Sparty. Let’s take a look at how they did it.

A few notes on personnel: 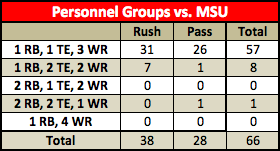 Faking The Bubble (Without Actually Running A Bubble) 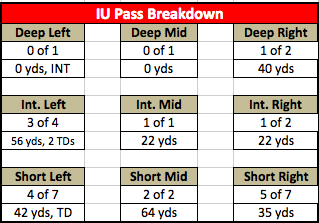 First of all, note that I had to title the above chart “IU Pass Breakdown” rather than “Richard Lagow Breakdown” or even “QB Breakdown.” So yeah, it was sort of a weird offensive game for the Hoosiers.

Further evidence of offensive weirdness: IU didn’t run one of its staple plays – the bubble screen – a single time against MSU. Over the last several seasons, the Kevins (Wilson and Johns) have established the bubble screen as an integral part of their offense. Consequently, opposing defenses prepare to stop it.  This means that IU can use bubble screen action (i.e. plays that are designed to look like bubble screens but actually aren’t) to great effect, even when they don’t establish the bubble screen in a given game.

Case in point: two of IU’s biggest plays came on variations of bubble screen action and were undoubtedly assisted by a Spartan defense was prepared to stop the bubble screen, despite the fact that IU didn’t actually throw a bubble screen in this particular game.

The first was, for my money, the most important non-scoring play of the game. IU trailed 14-0 late in the 3rd quarter. They had just blown two golden scoring opportunities. The offense needed a kick-start, and it got it from a bubble action pass to Ricky Jones. In the clip below, watch as slot receiver Mitchell Paige runs a standard bubble route to the sideline, while Jones hesitates for just a second before cutting inside. That hesitation was enough to freeze the corner opposite him, who likely anticipated a block:

Lagow’s pass was right on the money, and Jones did an excellent job of running after the catch (with a big block by Nick Westbrook).

Later, bubble screen action once again left Jones wide open. This time, Jones was in the slot, with Nick Westbrook to the outside. At the snap, Jones ran a bubble route to the sideline, while Westbrook slides inside, ostensibly to block for the screen. Lagow pump-faked the bubble and Jones cut up the sideline, leaving the Spartan defender in his wake. Tie ballgame:

A work event on Saturday night kept me from watching the 1st half and the start of the 2nd so I had the privilege of listening to Don Fischer describe the first[ref] I had typed “and possibly last” but you know K Dub will have him put it up again…[/ref] pass of true freshman running back/battering ram Tyler Natee’s career.  Don was not pleased. Neither was I. I’m guessing most of you weren’t either.

Later in the 3rd quarter, on a 3rd and goal, Wilson reached back into his bag of tricks and called another one. This time Mitchell Paige took a hand off on what looked like a jet sweep, before he turned and threw back to Lagow, who made a difficult over-the-shoulder catch look easy. I wasn’t listening to Don at that point, but I’m guessing he was happy. I was happy. I bet most of you were too.

Were we all just mad because one play worked and other didn’t? I’m not sure that’s fair. It’s possible to distinguish between the two plays – one involved a true freshman throwing his first pass to a little-used tight end who’d never caught a pass, while the other had already been run successfully by Paige the previous year (against Ohio State – to a much smaller target in the Zand Man). One was on 4th down in a 7-0 game, the other was on a 3rd down in a 14-0 game.

Still, with the benefit of time and an incredible comeback win, I don’t hate the Natee play call quite as much. The fact is this offense has struggled mightily to finish drives. Without Feeney and Camiel, the offensive line hasn’t been able to impose its will in the red zone. Creativity is required to get into the end zone. We might not love the idea of Natee throwing a pass, but the guy was a QB in high school[ref] Admittedly in a run-heavy offense.[/ref] and I’m guessing that play had worked a few times in practice. At this point, if the Kevins think it might help the offense finish drives – and keep the field goal unit from taking the field – I say bring on trick plays in all forms.

Wes Rogers Blocked A Few Spartans Without Being Called For Holding

Going into the MSU game, I’m guessing IU center Wes Rogers knew he had his work cut out for him.

Former 5-star recruit and future NFL defensive tackle Malik McDowell is a stud, and blocking him is, umm, difficult. Sure enough, in the first few IU possessions, Rogers was flagged for an illegal snap and two holding penalties. The running game was scuffling.

To Rogers’ credit, however, he just kept playing, and while no one can shut down McDowell[ref] Well, other than a ref that calls him for targeting.[/ref], Wes did manage to get the better of him on at least a couple plays. Watch him here (#65) on this outside zone play:

Rogers stays with McDowell and eventually drives him out of the play, helping to set up a cutback lane for Devine Redding.

Later, on an inside zone run, Rogers reached McDowell and got just enough leverage on him to create an opening for Devonte Williams:

While we’d all love to see the offensive line cut down on penalties and create a few more running lanes, the way Wes Rogers and his crew improved throughout the game and ultimately put up more than 150 rushing yards on a stout Michigan State rushing defense is encouraging.