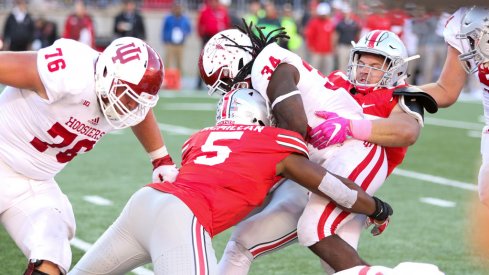 Ohio State week is over.  Time to move onto the rest of the season.

Congrats to this week’s winner, thunderpup12, for 5 correct picks.

As has been the theme so far for Indiana, the only touchdowns came through the air.  The Hoosiers had 4 rushes from the 5 yard line or closer, but those rushes ended with a combined -2 yards.  Indiana still has just 2 touchdowns on the ground, ranking last in the FBS.  On the other side, Ohio State still has not allowed a rushing touchdown.  Up next for IU, a Nebraska team that has allowed 8 touchdowns.  Let’s toss the Newton/Natee package out there and pound one in.

Indiana would have hit 20 points with a made field goal in the fourth quarter, but went for it on 4th and 2 when they were down by 14.  As such, the unders win this one.  While Indiana ranks a paltry 85th in points scored at 26.6 points per game, I’m telling you, this offense has underperformed.  The Hoosiers should finish in the top 50 in points scored at around 30 per game.

Opportunity rate measures the percent of a team’s rushes that go for 5+ yards.  The Buckeyes narrowly eclipsed our line.  The OSU juggernaut was inconsistent in their passing game, but was extremely tough to slow on the ground with their plentiful weapons.  J.T. Barrett had a highlight opportunity on just 34.8% of his rushes, but 6 of Curtis Samuel’s 9 rushes went for 5+ and Mike Weber was at 53%.

This one was solidly for the overs as the Buckeyes turned their 6 scoring opportunities into 5 touchdowns and 1 field goal.  But then Richard Lagow tossed a late interception that gave Ohio State another scoring opportunity.  However, Urban Meyer pulled the anti-Bielema and OSU failed to score on their possession as time ran out.  Their “failed” possession flipped the over/under to the unders.

Ohio State managed to convert on just 5 of 14 3rd downs.  The Buckeyes converted on 2 of 5 standard downs and 3 of 9 passing downs.  Following Saturday’s game, OSU is now ranked 5th at 53%.  The Hoosiers now rank 40th in 3rd down defense at 34%.  Compare that to last year’s 42% and there are visible signs of improvement all over the defense.

Cameron Johnston came into this contest with 11 punts in 4 games.  Indiana was able to slow down the Buckeyes enough possessions that he was forced to punt 6 times.  Those 6 punts averaged 49.2 yards with a long of 54 yards.  His shortest punt was 40 yards.  Four of his 6 punts went for 50+ yards.