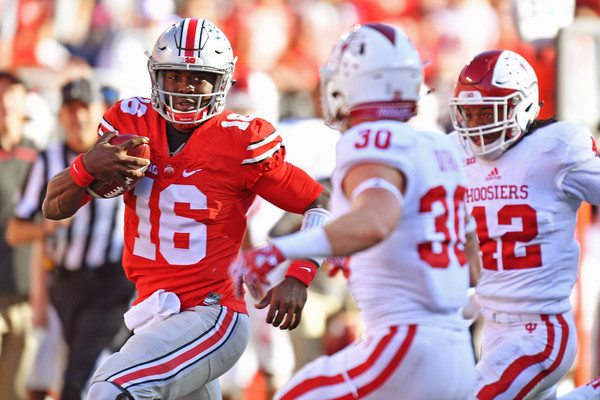 Indiana played reasonably well against Ohio State.  But for Indiana to have pulled off the monumental upset it would have probably taken no Indiana turnovers, touchdowns over field goals (or turnover on downs), and limited big plays allowed.  The Hoosiers would have to play a near perfect game for that to happen and unfortunately it was not meant to be.

This game was dominated by big Buckeye runs. Ohio State had an explosive rushing rate of 19% with rushes of 13, 17, 12, 22, 27, 11, 27, 11, and 10. While the frequency was there, Indiana did a much better job of limiting huge runs than they did against Ezekiel Elliot last year. In that contest, Elliot had rushes of 55, 65, and 75. Explosive play % measures frequency but isoPPP measures how big your big plays were. As you would expect, OSU had an isoPPP of 2.7 last year but only 0.95 this year. Indiana was able to prevent the huge runs as they have all season. As such, they are 1 of only 6 schools to have not allowed a rush of 30+ yards.

For Indiana, Devine Redding had 3 explosive rushes, but that was it for the Hoosiers. The IU backup running backs only had 1 rush greater than 4 yards. That was a Tyler Natee 9 yard run. Indiana found much better luck through the air, at least in the first half. Richard Lagow had 3 explosive passing plays in the first half, one to each of his starting receivers. However, the second half was barren as IU’s passing game averaged just 2.9 yards per attempt with only one play, a 17 yarder, going for more than 9 yards.

The main statistic here is success rate and it was dominated by the Ohio State rushing attack. The Buckeyes were successful on 57% of their rushes and rank 1st nationally at 62%. They gained 5+ yards on 47% of their rushes. They are really good. Their dominance speaks more about Ohio State than it does the Indiana defense. Outside of the aforementioned 2 big Buckeye passes, Ohio State was only successful on 18% of their pass plays.

Indiana had trouble getting it going against the best defense they’ll face all season. They had a success rate of 25% rushing compared to 33% passing. Devine Redding had a respectable 36% success rate, but the backups had a successful run on just 3 of 15 attempts. Indiana should find better success[ref]Pun intended[/ref] against a Nebraska defense that ranks 63rd nationally.

Ohio State started drives on the 1, 2, and 6 yard lines and still had an average starting field position advantage. This was because of the drives following the Richard Lagow fumble, the Parris Campbell 91 yard kickoff return, and the Lagow interception gave the Buckeyes drives starting deep into Indiana territory. Indiana did have great field position following the 2 Ohio State turnovers to negate Ohio State’s large advantage in this category.[ref]If you check out Football Study Hall, you’ll notice that Ohio State’s average starting field position was the 38 yard line. The difference is late in the game Indiana turned the ball over on downs at the OSU 33. Ohio State was charged with unsportsmanlike conduct following the play. Football Study Hall is using the 33 yard line as the spot Ohio State took over even though that wasn’t a penalty that took place after the Buckeyes took over possession. It’s just a quirky way that the play by play data is fed. It is a lot easier to just cover 1 team like we do than it is the 128 that Football Study Hall reviews.  We used the OSU 48 yard line as the starting field position on that drive leading to the difference.[/ref]

Ohio State had the decided advantage generating 2 additional scoring opportunities and averaging nearly 2 points more per scoring opportunity. Indiana’s first opportunity ended in a field goal and their second ended in a punt. On that one, IU had the ball at the OSU 27, but 2 straight Redding rushes for -5 total yards backed up the Hoosiers. Following an incomplete pass, Indiana punted. Had IU not lost yardage on first and second downs, it is fair to say Griffin Oakes would have had a shot for 3 points. On the final opportunity, game score dictated that IU went for it on 4th and 1 although you could argue Indiana would have been better served to pass it.

This was the first game all season that Indiana had fewer scoring opportunities than their opponent.

No real advantage here as both teams had turnovers in their own territory. After giving up their +5 turnover margin advantage against Wake Forest, Indiana has played 2 consecutive games with the same number of turnovers gained as lost.