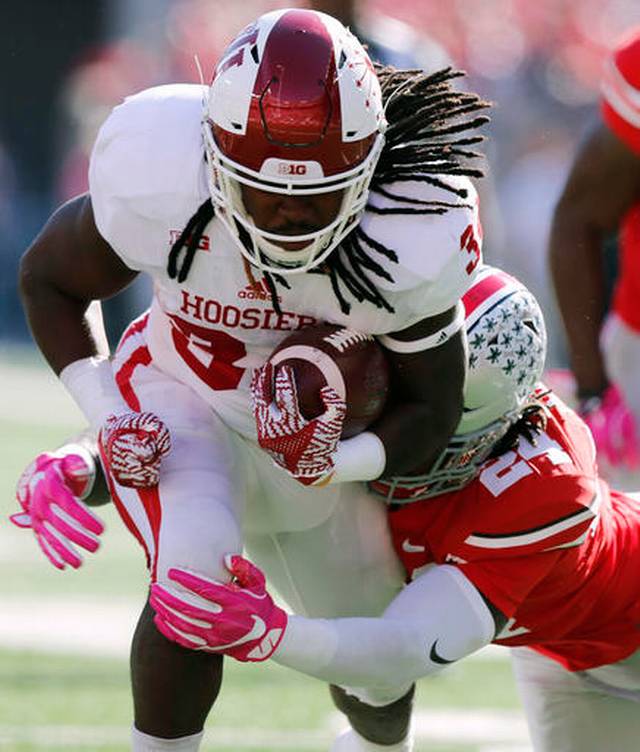 Not much to see here. Natee was the #2 option at running back for the second straight week. Still no Cole Gest or Dan Feeney. I miss Dan Feeney.

Much has been made on this site and pretty much everywhere in IU football media about the tremendous job that Kevin Wilson and Greg Frey have done building an offensive line.  And it’s 100% justified. It’s not easy to build an above-average offensive line at IU, and they’ve more than cleared that bar for the past few seasons.

If you think about it, in the Wilson Era, has there ever been a game in which IU’s offensive line was the most over-matched unit on the field? I can’t remember one. That has something to do with the ineptitude of a number of positions on defense over the years, but still. While the O line has been out-played occasionally during Wilson’s tenure, I can’t recall a time when I thought “the offensive line was the biggest problem on the field.”[ref] Let me know if you think I’m off base there. The closest I can remember to feeling that way was the 2013 Mizzou game, against a defensive line featuring Kony Ealy and Michael Sam.[/ref]

Well, that’s what I thought on Saturday, especially in the 1st half. Before I get too critical, remember that this O-Line is down its two best players, in Dan Feeney and Dimitric Camiel. A program like IU (and all but a handful of programs, really) aren’t built to sustain those sort of losses without some dip in performance. Also, Ohio State’s front 7 is insanely good – 4 and 5-star guys everywhere, with good coaching. IU’s ineffectiveness on the ground was a combination of an incredibly strong and athletic opponent, and an O-Line that lacked strength and cohesion.

The first example is a simple inside zone play in the 1st quarter. Watch left guard Wes Martin (76) as he steps playside and tries to engage the Buckeye defensive end:

Swing and a miss. The DE steps right around Martin and makes the stop in the backfield. A linebacker stepped around left tackle Coy Cronk (54) and was also there. There’s really nothing Devine Redding can do.

Later, in the 2nd quarter, IU ran into trouble on another inside zone. Watch center Wes Rogers (65) and right guard Jacob Bailey (70):

An inside linebacker and a defensive tackle easily shed both attempted blocks and blew up the play.

IU also had some uncharacteristic issues with combo blocks – a staple of any zone blocking scheme. Watch Rogers and Bailey again on this outside zone play:

I’m not positive about their blocking assignments, but if Rogers and Bailey were following normal outside zone principles, they should have combo blocked the DT who slanted between them, and then when Bailey has him under control, Rogers should slide to the second level to take on a linebacker.  Instead, Rogers handles the DT on his own, which is fine, except Bailey has no angle to block the MLB who cuts into the backfield to blow up the run. IU is generally very good at executing these blocks, and good technique in that area can help overcome physical mismatches.

Finally, watch left tackle Coy Cronk (54) attempt to cut block Nick Bosa on the backside of an outside zone:

On the playside, Jacob Bailey probably did enough to create a cut back lane for Majette, but Bosa’s backside pursuit took it away.  Now go back and look at where the play was made – 3 yards behind the line of scrimmage.

IT’S NOT ALL BAD NEWS THOUGH. In IU’s opening drive of 2nd half (it’s only productive drive of that half), the offensive line showed some improvement and demonstrated this group’s potential. Watch the cutback lane created for Devine Redding on this inside zone:

Knight takes his man out of the play, Bailey moves to the linebacker, tight end (and essentially 6th offensive lineman) Danny Friend gets just enough of the other LB, and Redding finally has some room to operate.

Later in the drive, Devine found another cutback lane, this time on an outside zone. Watch how Bailey and Knight execute the combo block this time:

Bailey and Knight start out blocking the same D-lineman, and then Bailey leaves him to Knight and gets a hit on an LB. Those blocks, along with Danny Friend ‘s seal on the backside DE, set up the cutback lane

And then that fateful 4th and 1 happened deep in Buckeye territory. Regardless of your opinion of the play call, the execution here wasn’t great. See if you can determine who Tyler Natee blocked:

If your answer is “Wes Rogers,” you’re correct! Of the interior lineman, only Wes Rogers created any displacement on a difficult reach block, but Natee barreled into him, setting the man Rogers was blocking loose to assist on the stop.[ref] To be fair, I don’t think high school QB Tyler Natee has done much lead blocking in his life.[/ref] Jacob Bailey also had a difficult reach block and was pushed backwards, while Wes Martin didn’t get any push on Nick Bosa, who probably had the play stuffed even if Natee hadn’t blocked his own man. There’s also an argument that Redding should have read Bailey’s block and cut back to the right, where Knight had his man on the ground. I’m not sure he makes it that way either, but it might have been closer.

In sum, the offensive line had a rough outing against Ohio State, but there were glimmers of hope too. They’ll have an opportunity to block some guys that aren’t going to play in the NFL over the next few weeks, which is nice. If IU is going to reach its offensive potential, this unit will need to show improvement.

Takeaway: See above. Running was a struggle.

Takeaway: That’s the most gap runs IU has tried since Feeney went out. It didn’t go that well.

Takeaway: The Kevins played this one fairly conservative, with only 3 passes traveling more than 20 yards down field. One of the two deep incompletions was a nicely thrown ball by Lagow that Donovan Hale couldn’t quite pull in at the goal line. Lagow put up more solid numbers on intermediate throws (10 to 20 yards threw the air[ref] Don’t be confused by the intermediate left number. Danny Friend’s TD traveled more than 10 yards because he was six yards deep in the end zone when he caught it, but he’s obviously only credited with a 7-yard reception.[/ref]), going 3-4 for 2 TDs. Ricky Jones had the first costly drop of the season on a 4th down slant that would have picked up a 1st down in the 4th quarter.