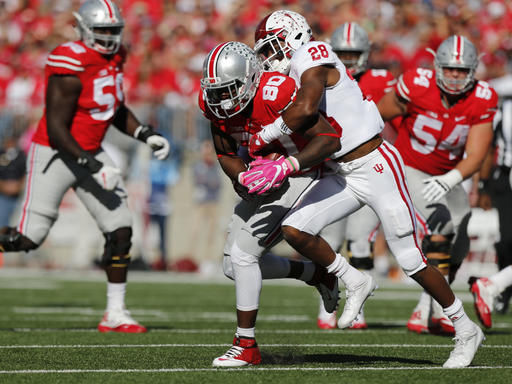 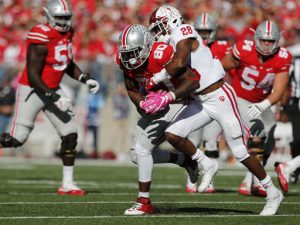 While the Hoosier defense turned in another solid performance against the dynamic Ohio State offense, Heisman Trophy candidate JT Barrett still managed to exploit IU on one particular play.

Again, the little numbers next to the names indicate the number of series in which a player appeared. For reference, there were 14 non-garbage time defensive series.

Last Saturday, the IU defense played incredibly well against one of the best offenses in the country. A suddenly strong secondary (and some windy conditions) neutralized the passing game, while the front seven made enough plays to get off the field much more often than any other defense OSU has played this season.

All that being said, there is one particular play that gave the defense trouble: the zone read, and more specifically, JT Barrett keeping it on a zone read. The zone read is a tricky play to defend in general. Case in point – IU struggled at times to stop Wake’s John Wolford on zone read keepers, and Wolford isn’t exactly Michael Vick.  But JT Barrett running it, with Urban Meyer’s coaching, a strong offensive line and running backs that require significant attention, is close to impossible to defend.

Barrett used the zone read early in the game when his offense was backed up inside their own 10. As with any zone read, a particular backside (meaning the side other than where the running back would go if handed the ball) defensive player is left unblocked and “read.”  On this play, that player is Ralph Green (93):

Green took the back, causing Barrett to pull the ball and run. WLB Scales happened to be blitzing on the play, which made it very easy for the OSU right tackle to push him out of the play. Assuming that Green did what he was supposed to do by tackling the back, you would expect MLB Marcus Oliver to slide over and handle the QB run, but the blitz may have thrown off those responsibilities. In any event, Oliver reacted to the run action to his right and was out of position to stop Barrett. Ideally, boundary safety Chase Dutra would have reacted more quickly to the run. He doesn’t even appear in the picture until Barrett is already 15 yards downfield.

So a number of things went wrong here, but going back to the beginning of the play, it looks like there is more defensive help to the playside if Barrett hands off. Against a QB like Barrett, it seems to make sense to tell an unblocked D-lineman like Big Ralph to just tackle the QB, forcing the ball into the rest of the defensive line. Of course, that may have been his assignment, and he just made a mistake.

But Ralph wasn’t the only unblocked defensive lineman to take on the running back. Watch Patrick Dougherty crash down on the back here:

Once again, Barrett keeps, Oliver gets sucked to the playside and blocked by a guard, and the tight end executes a stalk block on field safety Jonathan Crawford.

And again by Dougherty here:

This time, Covington, in for Oliver at MLB, breaks inside in reaction to the inside zone and gets blocked by a stalking TE. Scales comes from the backside to make the tackle. Again, it looked like there was more support if Dougherty had forced the handoff, but the fact that IU’s defensive linemen were consistently crashing on the running back suggests to me that they are coached to do so. That would mean IU’s linebackers are responsible for stopping the QB keep, which they failed to do in those three examples.

But they didn’t fail every time. Watch how this zone read keep is defended:

First, Nile Sykes doesn’t crash to the back. Second, Scales doesn’t flow to the playside and as a result, he has leverage on the guard that tries to block him, closing an interior gap. Scales and Sykes staying home forced Barrett to the outside, where safety Tony Fields (who moved into the box right before the snap) is there in support. All of that went right, and Barrett still picked up 4 yards.

On the bright side, IU didn’t give up any truly big plays to Barrett on a zone read keeper. The Hoosiers also did a solid job defending Barrett on inverted veer QB keeps, which is a similar play where the QB reads a playside defender and either hands to a back running wide or keeps it himself and cuts inside. Nonetheless, IU has room to improve against the zone read. I will be shocked if Tommy Armstrong and Nebraska do not test this apparent weakness. Armstrong isn’t the runner that Barrett is, but he’s much better than John Wolford.

Takeaway: As Kevin Wilson mentioned this week, Tegray Scales is a different player this year. He was everywhere against Ohio State, including pressuring JT Barrett twice. 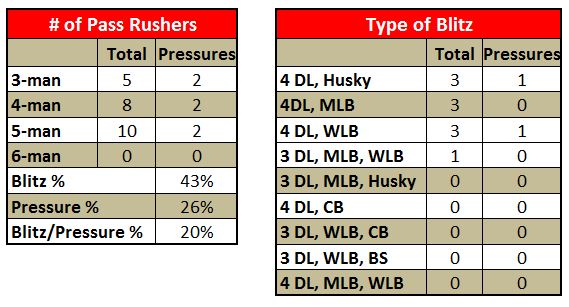 Takeaway: On a percentage basis, IU blitzed less against Ohio State than in any other game this year.  Despite not blitzing, the Hoosiers still generated pressure on more than a quarter of Barrett’s dropbacks, including two on 3-man rushes.  Through IU’s first 4 games, Allen had called a 3-man rush just once.  Against Ohio State, he used it 5 times. The likely (and sound) strategy here was to sit back, contain Barrett in the pocket and make him diagnose the coverage.  Given IU’s success using this strategy, I would expect to see future OSU opponents try it out.

Takeaway: Is it possible for a team to allow more than 200 yards rushing while only missing two tackles? When the opponent combines a great offensive line, solid scheme and dynamic talent that runs away from you before you can miss the tackle, I guess the answer is yes. (Also, I’m thinking I must have overlooked a missed tackle or two.) Still, missing tackles has not been a problem for this defense, which is a major improvement over the past few seasons.

Takeaway: With the exception of one TD pass against Jonathan Crawford, this was a really strong performance by the IU secondary.  Barrett only completed one pass against IU’s corners. Expect a tougher challenge this week against the Nebraska passing game.

Takeaway: How about that for balance – 1 TD in every category? Ohio State averaged 7.0 YPC on 30 runs to the right[ref] And this was not a “flaw of averages” situation where an offense has one or two big runs that skew the numbers.  53% of the rushes to the right gained 5+ yards compared to just 39% to the left.[/ref], and only 4.2 on 13 runs to the left.