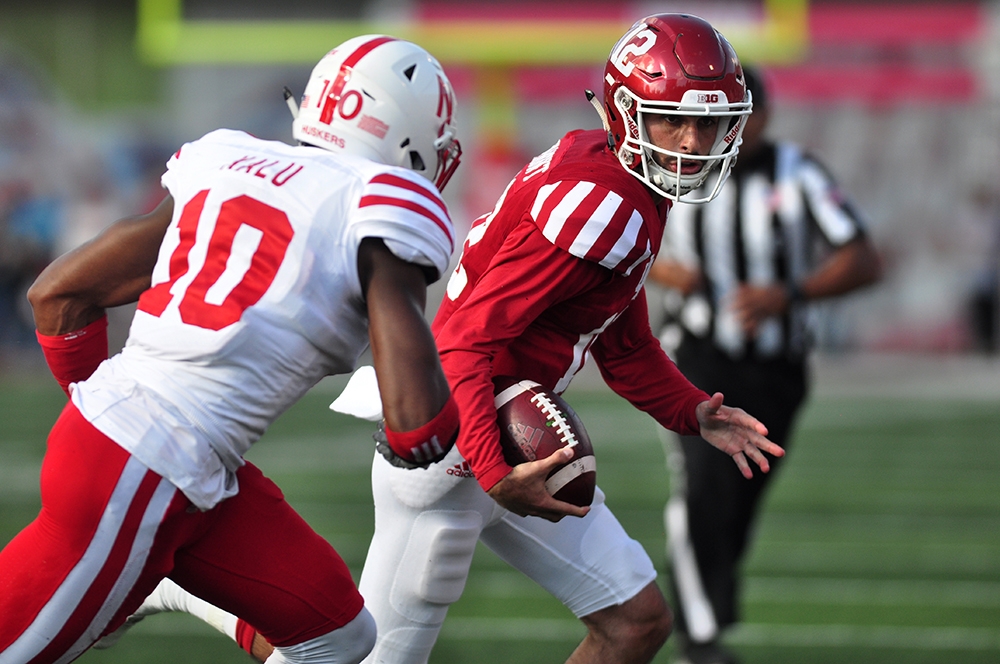 It was an inefficient offense with few big plays that had difficulty finishing drives.  Yet due to a stellar performance by the defense, the Hoosiers had a chance to upset #10 Nebraska.  It’s strange that this is the new normal for 2016 Indiana football, yet here we are.  Let’s recap.

Nebraska had one pretty big play and one really big play.  The former was a 45 yard pass in the first quarter in which Marcelino Ball had good coverage.  Unfortunately his deflection fell right to Brandon Reilly.  Seriously, what are you going to do?  The latter was a 72 yard touchdown in which multiple Indiana defenders ran into each other.  That was the 2nd longest play Indiana has allowed all season.  Other than those 2 plays, the longest that IU allowed was just 18 yards.  One play was a fluke, the other was due to poor coverage (and then a fluke), and other than that the Hoosiers continued to play strong defense.

Indiana had 5 plays that accounted for 127 of their yards, or 38%.  Their longest play was a 36 yard pass to Ricky Jones.  It’s worth noting that Indiana would have had a few more big plays if it weren’t for drops.

The rushing game…well, they had a big rush on a fake reverse but that was about it.

To start with the positives, Indiana’s defense continues to be strong.  They allowed a success rate of only 37%.[ref]IU now ranks 21st nationally in opponent adjusted success rate.[/ref]  Unfortunately, IU was not about to get a stop on Nebraska’s final drive.  The Cornhuskers started that drive with a success rate of just 32%, but the 14 play drive consisting of all rushes sucked up nearly 8 minutes of clock time due to a 57% success rate.  As a whole, the defense has been unlike any in recent memory.[ref]In a good way![/ref]  Unfortunately…so has the offense.

So yeah, the offense has been not great.  The passing game was okay[ref]Minus the turnovers. More on that later.[/ref] but the rushing game was consistently stopped, albeit against a strong Nebraska rush defense.  Even despite the spark, Zander Diamont’s rushes were successful only 43%.  Although when compared to Devine Redding’s 18%, it wasn’t that bad.

Indiana’s offense was particularly bad when they fell behind schedule and found themselves in passing downs.  While both teams had a 38% success rate on standard downs, Nebraska had the passing down advantage, 34% to 27%.

Excluding the final Nebraska kneel-down that didn’t matter, Indiana had a 4 yard average starting field position advantage.  That is partly due to Nebraska having a pick-6 instead of being tackled in Indiana territory.  However, Mitchell Paige’s big 39 yard punt return gave Indiana the ball at the Nebraska 33.  That return was huge for a stagnant Indiana offense and ended in Redding’s touchdown run 2 plays later.

This has been such a broken record.  At least the Hoosiers were able to create more opportunities than Nebraska.  Unfortunately they were unable to covert.  Let’s quickly rehash:

On the season, Indiana has a success rate of 44% outside the opponent’s 40 yard line and a 32% success rate inside it.

But enough of that, the defense only allowed 4 scoring opportunities.  The first came on Nebraska’s first two drives.  But then the Cornhuskers went 9 straight drives before ending the game with 2 scoring opportunities.  NINE STRAIGHT DRIVES.  The closest to the end-zone play Nebraska would run during those drives was the IU 40 yard line.  Those 9 drives resulted in just 96 yards and 2 Tommy Armstrong interceptions.  The defense really stepped up and gave Indiana a chance to win the game

Both teams had 2 interceptions, but Nebraska was able to take one of their picks for a touchdown, thus the higher turnover points.  Indiana also blocked a punt resulting in a safety.