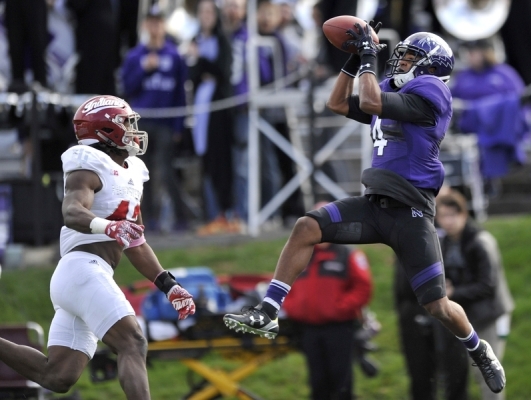 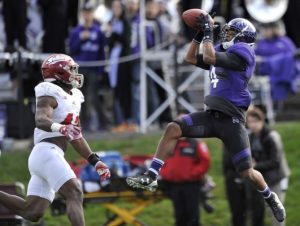 A disconcerting start turned into an encouraging display of defensive adjustments.

(The little numbers indicate the number of offensive possessions in which a given player participated.)

A Rough Start, Followed By Adjustments

The first half looked quite a bit like IU defenses we’ve seen in previous seasons during the Wilson era.  Receivers were running wide open and running backs were into the secondary before they were touched. To the defense’s – and the defensive staff’s – credit, however, adjustments were made as early as the 2nd quarter and results improved.  I’ll focus on one particular adjustment today.

Northwestern knew that Rashard Fant always lines up against the receiver that is closest to the sideline to the field (wide) side.[ref] I say “lines up” rather than “covers” because sometimes Fant is in zone coverage.[/ref] By never lining up Austin Carr in that position, Northwestern could eliminate the possibility that IU’s best cover guy would guard NU’s best receiver.  By lining Carr up in the slot, they could dictate a matchup against either IU’s Husky or one of its linebackers or safeties. And that’s exactly what they did.

It started on the first drive, when the Wildcats faced a 3rd and 5. Boundary safety Tony Fields lined up five yards off of Carr, who was in the slot. Carr ran a simple crossing route, Fields wasn’t close enough in coverage and got caught up in the wash created by another crossing route. Easy 12 yard gain and 3rd down conversion:

Later in the 1st quarter, on another 3rd down, Carr lined up as the receiver nearest the offensive line in trips. This time, Marcelino Ball, IU’s true freshman Husky (who’s had some issues with pass coverage this season) lined up in press coverage.  Carr ran an 8-yard out route, and Ball was not quick enough to defend it:

The worst example came in the 2nd quarter. Again, Carr was the nearest receiver to the offensive line in trips.  At the snap, IU defensive end Greg Gooch dropped into coverage on Carr as IU blitzed from the other side of the line. Carr easily beat Gooch on a slant route that turned into a big gain:

Early in the 2nd quarter, however, IU made an adjustment. The first time it happened was a 3rd and 10 on IU’s 34 yard line, with IU already trailing 21-3. Carr took his normal position as the near man in trips, but this time, Fant shifted down to cover him. Watch Fant’s coverage here:

Carr looked to be running some sort of wheel route to the outside, but Fant was in his hip pocket and likely discouraged an early throw from Thorson. When Thorson was flushed from the pocket, Fant stayed with Carr and eventually broke up a pass that otherwise would have given Northwestern a 1st down in the red zone.

IU didn’t always deploy Fant on Carr. In fact, the Gooch-on-Carr disaster actually came after this first example of Fant-on-Carr.  But on at least five separate occasions – usually on 3rd down – Fant was in man coverage on Carr in the slot. Carr did not catch a single pass with Fant on him. This wasn’t the only adjustment the IU defense made – using more zone coverage to combat Northwestern’s deep out routes and attacking the line of scrimmage with safeties on Northwestern’s pin-and-pull outside run plays were two others – but it was probably IU’s most important one, as it neutralized Northwestern’s best weapon in the passing game.

The obvious question is why IU didn’t deploy this tactic immediately. During his weekly press conference, Coach Allen said that he was guilty of “over-scheming” a bit against Northwestern, and I suspect not putting Fant on Carr from the jump is an example of that. This is backyard football stuff – your best player covers their best receiver. Credit to the defensive staff for quickly recognizing their error and correcting it.

Takeaway: By my count, coming into this game, IU had rushed 6 only once all season. They brought 6 four times against Northwestern.  Interestingly enough, IU didn’t blitz that much overall. The 33% blitz rate was IU’s lowest since the FIU game. Coach Allen & Co. also kept the blitzes fairly simple. With one exception (a blitz by Chase Dutra), IU only blitzed its two linebackers.

Takeaway: It took more than half the season, but Jonathan Crawford – who, along with Fant, plays the most snaps on the defense –  finally missed a tackle (and then missed another one in the same game.) Overall, nine missed tackles is a few more than you would prefer against a team like Northwestern without a bunch of massively talented skill players.

Takeaway: He may have missed a few tackles, but Crawford had a very effective day against the pass.  He allowed under 4 yards/per target on a whopping 8 targets and broke up 3 passes.[ref] On the other hand, I suspect that Crawford was responsible for the zone coverage bust that led to Northwestern’s 2nd TD, but I couldn’t definitively assign that one so it stays out of these stats.[/ref] Fant also had a good day, breaking up all three passes thrown his way, but man, one of those really should have been a interception in the end zone. Like Tim Bennett before him, Fant seems to struggle to convert “hands-on-ball” into interceptions.

Takeaway: The heavy emphasis of Northwestern’s rushing attack was different variations of pin-and-pull outside runs. They gashed IU early, but as these numbers show, IU settled down and turned in a decent performance overall, giving up only 3.4 YPC on outside runs and 3.7 YPC on inside runs.