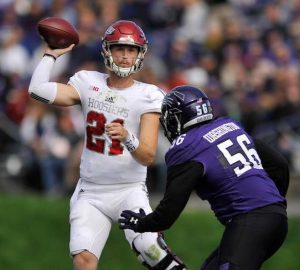 We’ve officially moved into the “Let’s Just Get Through This” mode that used to apply to Defensive Film Studies. Nevertheless, this week’s Offensive Film Study tries to accentuate the positive…

**Full disclosure – The Cubs are in the World Series, the Real Job has been a little busy and the offense wasn’t much to look at against Northwestern. So yeah, this Film Study is a on the short side. Please forgive me.**

(The little numbers indicate the number of offensive possessions in which a given player participated.)

We’ve covered the offense’s various issues at length in this space over the past few weeks. Honestly, I need a week off. That stuff gets depressing. So this week, I’m going to focus on a few highlights from the Northwestern game.

First up, the return of Dan Feeney. Dan wasn’t all the way back to his usual road-grader self, but he made an impact nonetheless. Watch him here on a rare successful pin-and-pull outside run:

Next, reserve running back Devonte Williams showed some explosivness.  Check him out on this inside zone:

And again here on another inside zone:

On both runs, TE Danny Friend caved in the backside defensive end, creating a nice cutback lane. Williams showed good vision to see the available cutback and then nice acceleration and elusiveness.

Our third and final positive development: CAMION PATRICK CAUGHT A PASS. And then he caught another one.  Here is the second one:

It’s a simple deep hitch route against a defense that wanted to keep everything in front, but a catch is a catch. And Patrick showed a little of his strength in fighting for extra yards after the catch.

Takeaway: IU had no choice but to throw the ball for most of the 2nd half, but there’s no reason to suspect that more attempts would have led to more success.  11 carries outside the tackle for 21 yards just isn’t good enough.

Takeaway: Feeney’s return didn’t exactly solve the gap running problem. IU only ran one Power O-style inside the tackle pull for Feeney. Other than that, the gap runs were the pin-and-pull outside runs like the Redding run shown earlier. That one was good for 11 yards, which means that the other 7 gap runs netted a disheartening 2 yards. 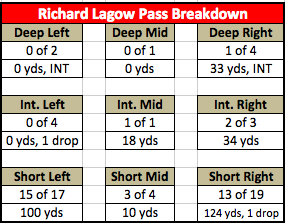 Takeaway: On passes beyond 20 yards, Big Rich completed more passes to Wildcats than to Hoosiers. This chart gives a clear picture of the passing offense against Northwestern – hitches and outs by the outside receivers, along with swing passes to the running backs and bubble screens to Paige, were regularly completed and for decent yards. All told, Lagow was 31 of 40 for 234 yards (5.9 YPA) on passes traveling less than 10 yards downfield. Anything beyond that was dicey, to the tune of 4 of 15 for 85 yards (5.7 YPA) and 2 INT on passes traveling 11 yards or more downfield.