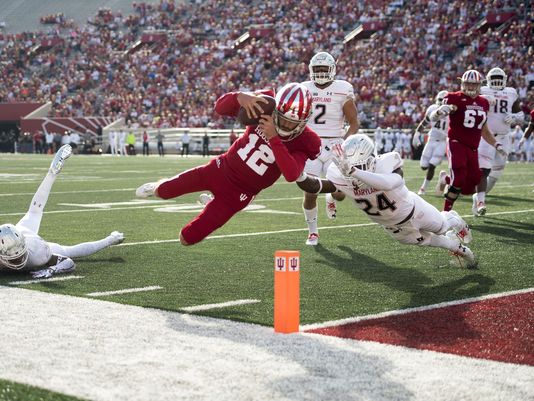 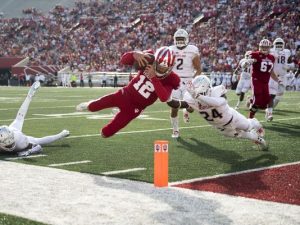 If you liked chunk runs, this was the game for you. Nearly 31% of Indiana’s rushes went for 10+ yards. As I mentioned yesterday, 35% of Devine Redding’s rushes went for 10 or more yards. In coordination with Dan Feeney’s playing time increase, Redding just rolled over the Terrapin defense. Natee and Diamont combined for a 29% explosive rate. Mike Majette added 2 big carries and even Mitchel Paige got in on the action with a 15 yard run.

Maryland’s rushing game combined for a 23% explosive rate. That’s much more than the 11% IU had allowed going into the game as well as the 20% against Ohio State. The longest was a 66 yard run on Maryland’s first touchdown. All of the other explosive rushes were in the 10-20 range. On the season, Indiana is allowing a 14% explosive rush rate.

Passing-wise, neither team had much going in the way of big plays. Perry Hills had passes of 21, 23, and 37 yards but had just an 8% explosive pass rate. Indiana was slightly worse at 7%. Richard Lagow had just 1 pass completed going for more than 20 and Zander Diamont’s only attempt went for 29 yards. Both passes went to Ricky Jones.

This was about as efficient of game as Indiana is going to have. First off, the Hoosiers ran 77% of their plays on standard downs.[ref] First downs, second-and-7 or fewer, third-and-4 or fewer, and fourth-and-4 or fewer.[/ref] It was great to see the offense staying on schedule.

The rushing game did most of the damage, recording a 65% success rate. On 1st and 10, Indiana gained 5 or more yards 65% of the time and failed to gain a yard (or lost yards) just 3 occasions. The Hoosiers were even better on 2nd downs where 13 of the 18 rushes either gave IU a first down or set them up at 3rd and 4 or less.

On 3rd down, Indiana was about as predictable as can be, yet Maryland failed to stop the Hoosiers. When the Richard Lagow offense was in, IU was generally in 3rd and long and the Hoosiers were passing. Ten times Lagow was QB on 3rd down and all 10 times Indiana passed, converting on 6. Four times Diamont was in, all 3rd and 2 or less, with Indiana converting on 3 of them.

As a whole, Indiana’s passing game finished with a 53% success rate. Nick Westbrook had a successful catch on 71% of his targets with Paige at 50% and Jones at 38%.

Indiana had a slight overall field position advantage due to the fumble recovery in Maryland territory. It was the only time a drive started in opponent territory for either game and led to an Indiana touchdown. Without that drive, Maryland would have actually had a slight average advantage.

Can’t harp on the Indiana offense too much. They ended up with 9 scoring opportunities and averaged 4.7 yards per opportunity. If there was anything to complain about it would be Kevin Wilson’s 2 point conversions.

KW calls the analytical data he uses to decide 2-point or 1-point conversions "junk," but he still uses it. #iufb

I’m not certain what “analytical data” Kevin Wilson is using that tells him to go for 2 after the Hoosiers go up 11.[ref]Stupid stats people with their numbers.[/ref] He might want to check the back of his data sheet and make sure it wasn’t printed in College Park, MD.  And why would you keep using something that you have labeled “junk”?

The Hoosiers did allow 7 scoring opportunities.  That ties the Ohio State game for the most all season. The 5.1 points per opportunity was 2nd to only the Buckeyes and the 3rd time this year IU has allowed that rate to be 5 or better. Up next is a Rutgers team that can’t finish their own drives and can’t keep their opponents from finishing theirs.[ref]Along with several other things they don’t do well. IU better not lose this game…[/ref]

For the first time since the Ball State game, Indiana did not lose a turnover.  They did force 2 turnovers, the most valuable one being the Marcus Oliver forced fumble that was recovered by Marcelino Ball.  Indiana is 3-0 when they have a positive turnover margin, 0-2 when they lose the turnover battle, and 1-2 when neither team has an advantage.