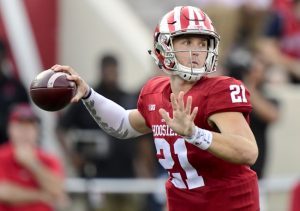 Indiana now moves back to being the underdog.  While awaiting this weekend’s matchup, we have another slew of questions coming your way.

Stuff rate is the percentage of rushes gaining 0 or fewer yards.  Penn State stuffs opponents 23.7% of the time.  The national average is 18.7%.  Indiana has been stuffed on 21% of their rushes which is 98th nationally.  Devine Redding has been stuffed on 20% of his rushes.  Tyler Natee is at 16%, lowest on the team among RBs.

There is no carry over from the Rutgers game, but what we are looking for here is the most passing yards that Richard Lagow can put together during any 5 consecutive attempts. His 2016 high is 133 against Michigan State. That stretch included gains of 57, 8, 6, 40, and 22. The 22 yarder was a touchdown that tied the score after the PAT. He has had 7 games in which he tallied 70+ yards on 5 consecutive plays. He achieved the task in all but the Northwestern and Maryland games.

The sophomore is probably the most talented running back that Indiana has faced this year.  He’s surpassed 150 yards in 3 of his last 4 games.  He’s averaging 8.3 yards per carry over that period.  On the year he is averaging 6.3 yards per carry and 117 yards per game.  He runs for 5+ yards on 40% of his runs.  While Indiana has shown some vulnerabilty the last couple games with rushes allowed of 66 and 30 yards, the Hoosiers have performed quite well against the rush.  IU is allowing less than 4 yards per carry which is a huge improvement compared to last year’s 5.2.

The Nittany Lions have struggled on 3rd down thus far.  They are converting on just 28% of 3rd downs, 125th nationally.  Indiana, on the other hand, has been fantastic defensively on 3rd downs this year.  Yes, it is heavily influenced by the 6% conversion rate allowed against Rutgers, but IU has only allowed a conversion on 31% of 3rd downs.  That is 14th nationally, a huge improvement over the 42% from 2015.  Even excluding the Rutgers game, IU has allowed a 3rd down conversion just 35% of the time which would rank 28th.

On the season Indiana has 56 points from field goals and extra points, all from Griffin Oakes.  However, Oakes has been in a major funk with 2 field goals blocked, 1 field goal missed, and 1 extra point missed against Rutgers.  He has only made 55% of his field goals this year.  He had reached 6 points in 4 games, but has only surpassed it twice.  Penn State has allowed 15 field goal attempts this year with opponents making 11.