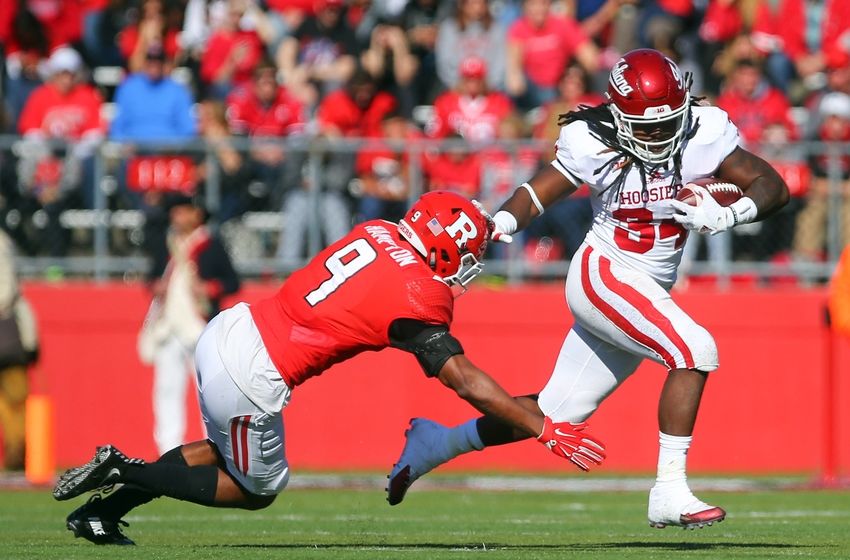 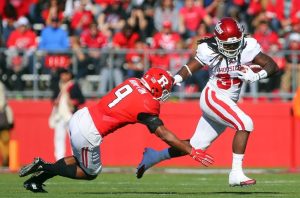 I’m playing catch-up (because CUBS) so this week’s offensive film study covers both the Maryland and Rutgers games, which featured two mostly good, but very different, offensive performances. Let’s have a look.

The Wild Bacon…And The Rest of the Running Game

Even though the shine has been taken off it a bit, we still have to talk about the Wild Bacon/Bacon ‘N Legs/Surf ‘N Girth personnel. First things first, we have to define what it is. For my purposes, I’m defining it as any play in which running back/battering ram Tyler Natee takes a direct snap with quarterback Zander Diamont lined up as a running back. There were instances during the last two games in which Zander took the snap with Natee at running back, and while that deployment creates similar problems for the defense, it is enough of a conventional alignment that I think it should be distinguished from the true BNL (Bacon ‘N Legs).

While the BNL is certainly unconventional, we should be careful not to overstate it. From a purely schematic standpoint, this isn’t really Earth-shattering stuff. The Kevins are simply using existing concepts in a way that takes advantage of the unique talents of their personnel.

By far the most common play ran out of the BNL so far has been an inverted veer with a backside pulling guard. The play calls for the QB to read the unblocked end man on the line of scrimmage (usually a DE) to the playside[ref] In direct contrast to the zone read, where the QB reads an unblocked end man at the line of scrimmage on the backside of the play.[/ref] while the running back runs across the face of the quarterback on an outside run path. If the DE moves outside in recognition of the RB’s path, the QB pulls the ball and runs to the gap vacated by the DE.  If the DE stays home, the QB hands the ball to the running back who should have the edge. You can run this play with a zone or gap blocking scheme (and IU in fact uses both), but the most common blocking scheme used by IU was down blocking by playside linemen with a pulling backside guard to lead the QB if the QB decides to keep (classified as “gap” blocking in the charts below).

Zander Diamont’s TD run on IU’s first drive against Rutgers came on just such a play. Like any other type

of run, the success or failure of this play is often a numbers game. Leaving a defender unblocked can help swing the numbers in the offense’s favor, but a defense can almost always overwhelm with greater numbers if they want to. Here, the numbers add up for IU. Rutgers had 8 defenders in box, but because IU was in a two-tight end set, they had a blocker for every defender, except for one DE who would be left unblocked. As the play begins, Wes Martin, the pulling guard on the play, actually ends up blocking the DE who would normally have been left unblocked. The DE had pinched down, presumably to force the hand to Diamont, and my guess is that the pulling guard is instructed to simply block the DE in that situation. If the DE had moved outside, the pulling guard would then lead through the gap between the DE and the rest of the line to the second level.  Also, keep an eye for the Rutgers safety who wasn’t in the picture at the start of the play. Not the best angle by that guy.[ref] It didn’t impact the play, but if you want a rare example of Dan Feeney whiffing on a block, check him out here. You don’t need perfect execution when you have the numbers in your favor, you are playing Rutgers, and you’ve got Zander’s speed.[/ref]

As the game wore on, Rutgers often added a 9th player to the box when IU went to the 2-TE personnel (or an 8th man if IU only had 1 TE), thus addressing the numbers issue. And perhaps more importantly, their defensive line regularly played in IU’s backfield, both against the BNL and the conventional rushing offense. On the other end of the spectrum, this play was so successful against Maryland because it caught the defense completely by surprise. The Terrapin D was never able to correct the numbers disadvantage, while at the same time, the IU offensive line completely controlled their front 7.

Like any other offensive scheme, though, once a defense has time to prepare, and if they have a pretty good idea of what you are running strictly based on your formation and personnel, it’s going to be hard to continue to succeed like IU did against Maryland. In fact, Coach Wilson predicted as much in his post-game comments after the Maryland win. He said that opponents would adjust and come up with schemes to stop it. Sure enough, in the Rutgers game, after Zander’s TD, the subsequent 9 plays in which Tyler Natee took a direct snap picked up a total of 14 yards.

That doesn’t mean that the Kevins should scrap the BNL altogether.  It just means that they need to choose their spots and, if they want to use it semi-regularly, they need to work in more passing options that keep the defense guessing.

Nevertheless, in the midst of a truly underwhelming performance on the ground, the offensive line had a moment of brilliance. Devine Redding’s 3rd quarter TD run should be shown on instructional videos for outside zone blocking. Everything starts with the center on an OZ. If the center allows penetration or lets his man get free to the playside, the back will have no chance to make the all-important cutback. Frankly, that’s been a consistent issue with IU’s outside running this year, and it was at times against Rutgers as well. Just not on this play. Center Wes Rogers controls his man, helping to create a wide-open cutback lane. Meanwhile, left guard Wes Martin moves to the second level and drives a linebacker directly to the sideline, while left tackle Coy Cronk does the same to a defensive end. H-back Ian Thomas arches to the outside and gets a hit on an outside linebacker. Backside guard Dan Feeney and backside tackle Delroy Baker combo-block a defensive tackle and Feeney is quickly freed up to find someone to block on the second level, finally managing to obstruct a safety 20 yards downfield. Ricky Jones and Luke Timian chip in with excellent downfield blocking. Seriously, everyone executed their block, Redding made the right cut and wasn’t touched for 30 yards. Watch this thing of beauty:

Now figure out how to do that against Penn State.

I went a little heavy on the running game this week so I’ll keep it brief on the passing game and let the charts do most of the talking. First and foremost, the pass blocking the past two weeks has been strong to quite strong. In total, IU QBs were under pressure on only 8 of 69 total dropbacks against Maryland and Rutgers (11.6%), with only 3 sacks allowed. From the 2nd half against Maryland through most of the 1st half against Rutgers, the O-line went 31 consecutive dropbacks without allowing a pressure.

Second, while Lagow’s deep passing and decision-making can occasionally underwhelm, he can be incredibly effective on intermediate throws.[ref] Passes that travel 11 to 20 yards downfield.[/ref] Against Maryland and Rutgers, Lagow totaled 198 yards and a TD on 10 of 12 passing in that range. 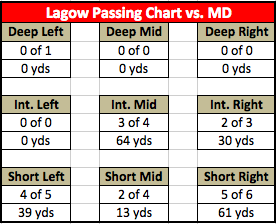 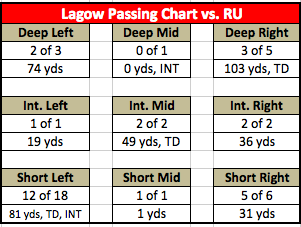