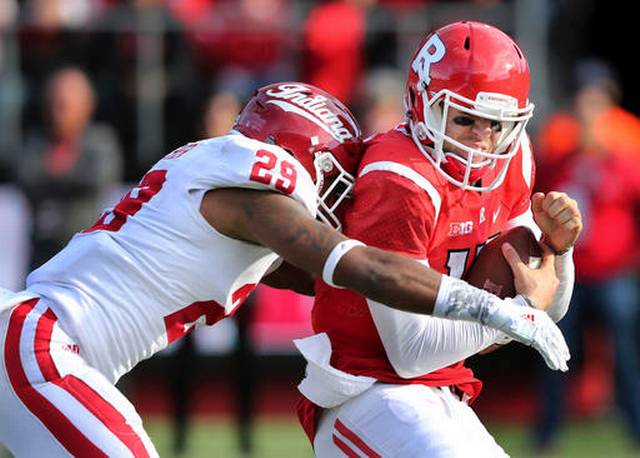 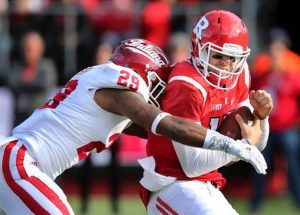 (The little number next to the name is the total number of possessions in which that player appeared.)

For the 4th straight week, the IU defense was a little shaky in the 1st quarter. The biggest example of that shakiness was a blown coverage that led to a walk-in 68-yard TD catch for Rutgers’ Andre Patton. On the play, Rutgers was aligned in trips to the field side. Rashard Fant was in press coverage on the widest receiver.  Ball was 5 yards off the ball over the middle receiver and field safety Jonathan Crawford was 9 yards off the ball on the inside receiver.  At the snap, the middle and inside receivers both ran straight upfield for about 15 yards or so, at which point Patton, the middle receiver, cut to the middle of the field on a deep post route while the inside receiver cut underneath Patton on a deep out route.[ref] This isn’t visible in the live view, but the replay from the end zone view at the end of the clip shows it.[/ref] As the receivers cross, there is clear miscommunication as both Ball and Crawford react to the out route, leaving Patton all alone in the middle of the field. As Patton makes the catch, you can see that Ball is a good 10 yards away from him, throwing his hands in the air in frustration:

Given their alignment at the snap (with Ball closer to the LOS than Crawford) and Ball’s move to cover the out route when the receivers crossed, my guess is that Ball and Crawford were in some sort of zone. Whether that zone divided responsibilities by inside/outside or vertical/short is hard to say, but either way, the route combination Rutgers ran is designed to create a zone coverage mistake. Crosses at or within a few yards of the LOS are generally easy for two defenders to handle. At 15 yards downfield, however, one defender may deem a receiver’s man’s route vertical and stick with him wherever he goes (like Crawford might have done here), while another still tries to switch in reaction to a cross (like Ball). The other option, of course, is that one of Crawford or Ball was simply mistaken about whether this was zone or man.

On the bright side, after this play, the defense did not allow another completion more than 10 yards downfield until late in the 4th quarter. Nevertheless, if IU wants to knock off a Penn State team with an explosive (albeit inefficient) passing offense, the defense cannot afford any blown coverages like this.

The Emergence of Robert McCray

Heading into the Rutgers game, I would have said that every defensive linemen in the regular rotation had exceeded expectations for the season, with one possible exception – Robert McCray. Coming out of spring ball, McCray seemed to be a clear starter and possibly IU’s best pass rusher. An unfortunate injury suffered in fall camp kept him out for the first half of the year, and while he hasn’t been bad since his return, he hasn’t really made any big plays. In addition, Paul Dougherty’s strong play has limited McCray to about half the snaps at strongside defensive end per game, at the most.

In the span of a few series in the 2nd half against Rutgers, however, McCray showed what he is capable of. First, he blew past the right tackle and blasted Rescigno as he threw, causing the pass to flutter off target. On the next drive, Rescigno was flushed from the pocket and tried to scramble for 1st down on 3rd and 14. McCray, who was almost 10 yards behind the line of scrimmage when Rescigno broke from the pocket, hustled back into the play, and after a few of his teammates couldn’t bring Rescigno down, McCray knocked the QB down two yards short of the 1st down. Then, on the next possession, McCray notched his first sack of the season.[ref] I would love to show you video of all of these plays, but for some reason, no one went to the trouble of uploading this masterpiece of football to YouTube.[/ref]

Not surprisingly given his strong play, McCray was on the field for at least part of the Rutgers’ last nine offensive possessions. I would not be surprised at all to see McCray’s playing time increase for the last three games of the season, especially if he continues to impact the game like he did last week. The defensive line has been incredible this season – thanks to the excellent coaching of new/old DL coach Mark Hagen, Tom Allen’s scheme and their own hard work/talent – but generating a consistent pass rush without blitzing has been an issue. McCray’s emergence can fill that void.

Takeaway: Robert McCray wasn’t the only one putting heat on Rescigno. 13 pressures is IU’s high for the season. Six different D-linemen had at least one. 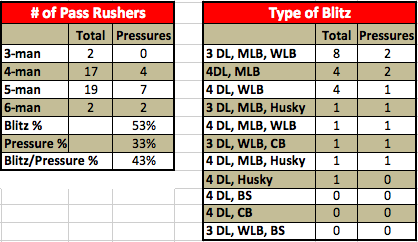 Takeaway: A 53% blitz percentage[ref] The percentage of total dropbacks in which IU sent 5 or more pass rushers.[/ref] was IU’s highest since the Michigan State game (55%). The pressure percentage of 33%[ref] The percentage of dropbacks in which IU generated a sack, hit or hurry.[/ref] was IU’s highest since the Ball State game. Tom Allen has rarely called for 6-man pressures – I’ve noted only 5 all season coming into this game – but both times he dialed it up[ref] As a person writing or talking about football, I’m obligated by law to use the verb “dial” to describe the calling of a blitz.[/ref], the result was a QB pressure. Although sending both linebackers was Allen’s blitz of choice, he was actually fairly diverse in his blitzes, using 8 different personnel sets.[ref] I’m careful not to say “8 different blitzes” there because the defense may employ several different blitz schemes using the same personnel, which I do not attempt to track.[/ref]

Takeaway: A week after struggling with 9 missed tackles, the IU secondary[ref] I include the Husky position in the secondary.[/ref] had only one missed tackle here. 5 of the 9 missed tackles came from the defensive line, which isn’t great, but all things being equal, you’d much rather have them miss a tackle then a defensive back.

Takeaway: Marcelino Ball’s day looks a little worse than it actually was. As I mentioned earlier, it’s possible the long Patton TD wasn’t his fault. After that, 3 of the 4 other passes that were caught against him came on Rutgers’ last drive when they trailed by 9 with under a minute to go and the game wasn’t really in doubt. That included a 42-yard pass on Rutgers’ last play from scrimmage. Also, IU’s three corners (Fant, Riggins and Green) were targeted 10 times and allowed just 38 yards. Sign me up for Penn State gaining less than 4 yards per attempt when throwing on IU’s CBs this week.

Takeaway: With the exception of a 30-yard run by Justin Goodwin in the 1st quarter, IU’s front seven dominated the line of scrimmage and shut down the Scarlet Knight running game. For a defense that’s had a little trouble containing outside runs, allowing only 24 yards on 14 attempts (1.7 YPC) on runs outside the tackle is encouraging, even if it was against a bad offensive team like Rutgers.