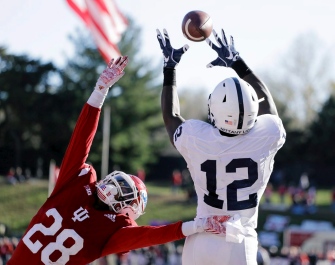 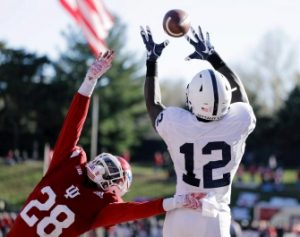 In yet another example of the final score not telling the whole story, the 45 points that Penn State ended up with against IU indicates a level of offensive dominance that was not reality. We’ll try to get at the reality of IU’s defensive performance in this week’s Film Study.

(The little number next to the name is the total number of possessions in which that player appeared. There was 16 total possessions.)

The Importance of Tackling

While scheme gets a lot more ink in this space, we can’t forget just how important tackling is to a defense. The best scheme in the world fails if the defensive players consistently fail to get the ball-carrier on the ground. While IU’s tackling has improved on Tom Allen’s watch, there have been some issues in recent games.  After only missing 5 tackles apiece against Wake Forest and Michigan State and amazingly only missing 2 against Ohio State, the Hoosiers have averaged just under 10 missed tackles a game in their last

4 contests.[ref] 8 against Nebraska, 9 against Northwestern, 13 against Maryland and 9 against Rutgers.[/ref] Against a team with the skill position talent of Penn State, another subpar tackling effort could have had a devastating effect.

Luckily, the IU defense rediscovered its tackling magic in time to shut down Saquon Barkley. IU defenders missed only 6 tackles against Penn State. Of those 6, only one came on a play that gained more than 1 yard. The other 5 missed tackles either contributed to a later tackle for a loss or short gain (by blowing up the timing of the play or forcing it further to the outside), or at the very least, didn’t lead to any damage.[ref] The 1 missed tackle that hurt was Rashard Fant missing Barkley on a 13-yard gain deep in IU territory in the 4th quarter.[/ref]

One drive in particular demonstrated the importance of good tackling. Penn State had a 1st and 10 on their own 46 early in the 2nd quarter following one of many IU fumbles.[ref] The Devonte Williams “I knew I was forgetting something…” fumble, to be exact.[/ref] On the play, PSU ran a zone read to the offensive left. WLB Tegray Scales blitzed from the backside, but didn’t reach the QB or RB in time to impact the play. Also, the defensive line happened to run a stunt that left a gaping hole right where Barkley was headed. Just as Barkley crossed the line of scrimmage and looked for daylight, boundary safety Tony Fields, who had moved up into the box right before the snap, knifed into Barkley’s path and made an excellent tackle, limiting Barkley to 4 yards. If Fields misses that tackle, it’s possible Marcus Oliver makes the play, but at the very least Barkley probably would have been close to a 1st down and possibly could have done much more. Watch it here (Fields is #19):

On the very next play, McSorley dropped back to pass and Marcelino Ball blitzed from his Husky position.  This left field safety Chase Dutra in man coverage on dangerous Penn St. receiver Daesean Hamilton, who had been lined up in the slot.  Hamilton ran a short out route and after McSorley’s throw was slightly behind him, Hamilton tried to duck under Dutra’s tackle. He almost got away but Dutra managed to get just enough of Hamilton to stop him one yard short of a 1st down. Take a look:

I can’t tell you how many times I’ve seen an IU defensive back miss a tackle in that situation.  If Dutra had missed there, Hamilton was off to the races. Those two tackles were followed up by two strong stands on 3rd and 1 and 4th and 1, resulting in a turnover on downs. Good tackling wasn’t the only story in that possession (or in IU’s defensive performance overall), but it made a significant impact.

If you wanted to nitpick the IU defensive line’s performance this season, one area you might point to is the lack of tackles for loss. Part of that is a consequence of scheme in that Tom Allen’s system is designed to funnel runners to the linebackers. Nevertheless, I’m guessing Tom would like a little more production than he’s received. Coming into the Penn State game, defensive tackle Ralph Green led all IU defensive linemen with just 4.5 TFL.

Big Ralph set out to address that shortcoming in one productive quarter against the Nittany Lions. First, early in the 2nd quarter, Green lined up as a 1-technique on the inside shoulder of the left guard. The play was supposed to go off tackle to the left side, with the right tackle pulling to lead. The left guard was supposed to down block Ralph, and was in a good position to do so based on his alignment outside of him. But at the snap, Green discarded the guard and blew up what was admittedly a slow developing play. Have a look:

The next play, also from the 2nd quarter, is actually the 4th and 1 from the drive I talked about earlier. This time, Ralph is lined up as a 3-technique on the outside shoulder of the right guard. The play appears to have been designed as an inside run to the right, but the offense’s plans went out the window when Big Ralph pulled a swim move on the guard and proceeded into the backfield. As you’ll see, #93 couldn’t make the tackle, but his backfield disruption made the play:

Later in the quarter, Green continued his dominance of Penn State’s guards. Green is again aligned as 1-technique. This time, Penn State tried to run a simple inside zone to the right, away from Green. The right guard had the unenviable task of executing a reach block on Ralph. He didn’t come close to pulling it off and Green blew up another Barkley run:

Ralph Green was a force of nature in the 2nd quarter. Sure, he didn’t make the same impact as the game wore on, but it’s not as if the Penn State running game ever really got going. This was almost certainly Mr. Green’s best game of the year, and it was probably the entire defensive line’s best game as well. 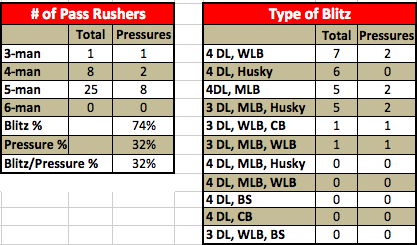 Going into the Penn State game, we knew that Trace McSorley and the Penn State offense liked to throw the ball downfield. Still, I didn’t expect 16 of 30 passes traveling more than 20 yards downfield, as the chart below shows:

For the most part, IU’s coverage on these deep balls wasn’t terrible. Take the one reception that Rashard Fant allowed: 2nd and 14 on the Penn State 26. IU blitzed McSorley, bringing MLB Marcus Oliver and Husky Marcelino Ball. Barkley whiffed on Oliver, who then had a free run on McSorley. Unfortunately, Trace released the ball just before Oliver barreled into him. Fant was in man coverage on Saeed Blacknall and was stride-for-stride with him as the ball was in the air. As Blacknall adjusted to the ball at the last second, Fant was maybe a touch too far to the inside, but the pass still had to be almost perfectly placed to beat him. Watch it all unfold here:

Penn State would score two plays later. In retrospect this was one of the bigger plays in the game. If McSorley’s pass had fallen incomplete, Penn State would have faced a 3rd and 14 and likely would have been forced to punt, giving IU the ball back with all the momentum and a 10-pt lead at the start of the 4th quarter. As it was, Penn State was right back in the game. Still, to succeed on this play, McSorley had to throw a perfect 40-yard strike – with a blitzer in his face – to his 3rd best receiver who was covered by IU’s best corner. That’s an extremely low percentage proposition.

That isn’t to say that IU’s coverage was always good. As the chart above showed, true freshman corner A’Shon Riggins had a rough day. In particular, he let a tight end get behind him on a 3rd and long in the 1st quarter. In the 4th quarter, he bit hard on a post-fake, leaving his man wide open on a deep out. But Riggins wasn’t responsible for the most egregious blown coverage of the day. That dubious distinction falls to fellow true freshman Marcelino Ball. Penn State faced a 2nd and 5 on their own 43 with 13:36 left to play, trailing by 3. Ball lined up 7 yards off the ball, just to the outside of the slot receiver Daesean Hamilton. At the snap, Ball appeared to be in man coverage on Hamilton. McSorley handed the ball to Barkley on what looked like an inside run, but then Barkley turned around and tossed the ball back to Trace. Flea flicker. On the live shot, you can’t see what happened to Ball – all you can see is him frantically trying to close the gap as a wide-open Hamilton hauls in McSorley’s pass on the IU 19:

The press box view gives the full picture. Hamilton hesitated at the 50 yard line like he might be blocking (or just stopping his route), and at the same time, Ball appears to be peeking in the backfield at what he perceives to be a running play. While Ball only froze for an instant, that was all Hamilton would need. He was five yards clear of Ball by the time Marcelino realized it was a flea flicker:

It’s also possible that Chase Dutra could have provided some coverage support, but he reacted strongly to the run action. Like any well-executed trick play, this flea flicker caught a couple IU defenders guessing, and the result was a huge play for Penn State. If IU has any chance to keep it close with Michigan, it cannot afford any coverage busts like this one.