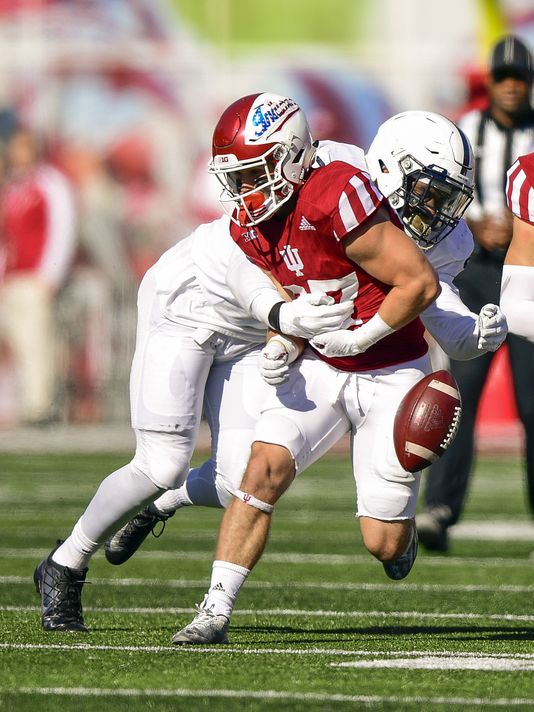 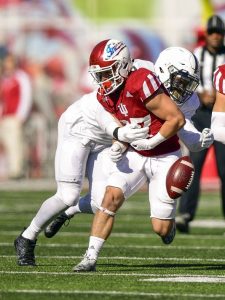 In this week’s Offensive Film Study, the spotlight is on IU’s passing game, through which the Hoosiers found some success against Penn State – just maybe not as much as they should have.

(The little number next to the name is the total number of possessions in which that player appeared.)

Return of the Drops

I feel like we’ve spent an inordinate amount of time analyzing the run game this season, so today I’m focusing on the passing game through three different topics. Let’s get the bad one out of the way first.

The 2016 IU offense has had its share of issues, but prior to last week, receivers dropping passes has not been one of them.  The same could not be said in 2015 or 2014, when drops were a fairly consistent issue.  Against Penn State, the drops returned. By my count, IU dropped four passes on Saturday, two by Nick Westbrook and two by Ricky Jones. I believe those were Westbrook’s first drops of the season so we shouldn’t be too hard on him…BUT…one of them was particularly costly. IU had a 1st and 10 on the Penn State 42, trailing 7-0 midway through the 1st quarter.  Westbrook ran a vertical route, Lagow saw single coverage, threw a near perfect pass and…

…dropped. To be fair, Westbrook probably brings this in after the first bobble if the corner didn’t hit him. But still, this ball needed to be caught. I’m sure Nick would say the same thing.  As it was, IU was forced to punt two plays after Westbrook’s drop.

IU had a distinct advantage against Penn State’s corners, and while they took some advantage, a few missed opportunities like this prevented the Hoosiers from taking full advantage.

To my knowledge, no one has ever questioned Zander Diamont’s speed, elusiveness, toughness or self-confidence[ref] To put it diplomatically.[/ref]. What has been questioned is his ability to stand in the pocket and make all of the throws that a quarterback in IU’s system needs to make.  Because opponents know that there’s some question about Diamont’s passing ability, they tend to sell out on the run when he enters the game.  The only way for Zander to keep opposing defenses honest is to show that he can be successful throwing the ball, and specifically, throwing deep.

Count last Saturday’s deep ball to Camion Patrick as Step 1 towards Zander facing fewer defenders in the box. Watch as Diamont stands in the pocket and takes a hit just after he releases a strong throw to Patrick:

The throw was ever-so-slightly behind Patrick, but it was more than adequate, considering Patrick made the catch 35 yards down field.[ref] By the way, there should be a certain level of comfort between Patrick and Diamont given their shared experience on the scout team last year.[/ref]  I have no idea if the Kevins will call on Zander this weekend, but if they do – and if the weather isn’t a complete disaster, which it looks like it might be – they might as well let him cut a few loose.

Winning in the Slot

Once again, Lagow’s intermediate passing numbers were strong in this one:

That’s 7 of 9 for 121 yds (13.4 YPA) with a drop. One particular intermediate passing concept accounted for a couple of completions against Penn State. In it, the slot receiver – either Mitchell Paige or Luke Timian – takes an outside release on the defender opposite him. As soon as the receiver clears the first defender or about 10 yards downfield, the receiver cuts in and looks for the ball once he’s inside of the short defender. The receiver is careful to cut his route off well in front of the deep zone defenders. As the description indicated, this concept is designed as a zone-beater because it takes advantage of the open space between the 1st and 2nd levels of a zone defense.

This concept takes advantage of a couple strengths of the IU offense: Lagow’s arm strength and accuracy on throws in the 10-20 yard window and the precise routes and good hands displayed by Paige and Timian. The downside is that these windows can close quickly, and Big Rich hasn’t always displayed restraint when the throw just isn’t there.

Frankly, I haven’t studied Michigan’s defense enough to speak to how they usually choose to defend slot receivers. If they play zone, hitting plays like this is a must.  If they play man, Paige and Timian need to win on out, corner and drag routes. Basically, I’m assuming that IU’s outside receivers, talented as they are, will struggle to consistently win against Michigan’s stud corners, Jourdan Lewis and Channing Stribling. To my mind, the success of IU’s passing game will come down to the slot receivers, and anything they can get out of the backfield.

Because we can’t ignore the running game entirely, take a look at the usual charts below. Not much to see in the direction chart – IU was average to below average across the board. By scheme, the Hoosiers were a little more successful on gap runs, but again, it wasn’t anything to write home (or write on a blog) about.

One last piece of tactical advice as IU prepares for the best defense it will face all season: try not to turn the ball over 5 times. Thanks.