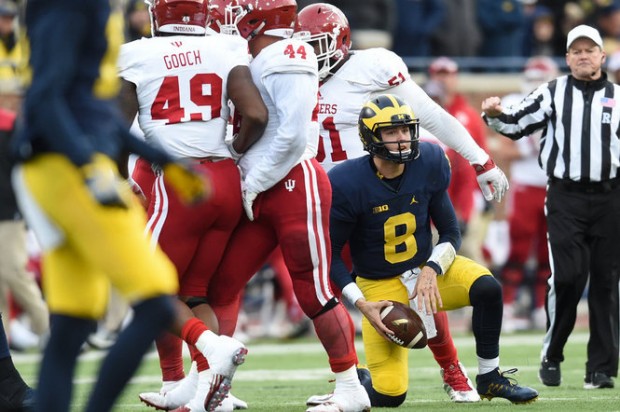 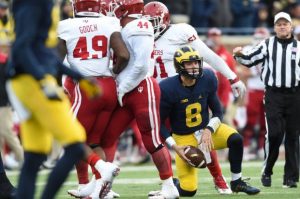 For the second straight week, Indiana led a top 10 team in the 2nd half.  Both times, the Hoosiers were unable to hold the lead.  Although Indiana eventually lost by 10, this one could have been a lot worse had it not been for a stellar defensive performance.  The defense overcame a field position disadvantage with stop after stop after stop.  Unfortunately the offense couldn’t help out and eventually the defensive wall cracked.

Of Indiana’s 7 explosive plays, 4 came on the ground.  Those four plays accounted for 55 of Indiana 92 rushing yards.  It was also the 6th time that IU has totaled 4+ rushes of 10+ yards.  On the season, Devine Redding has an explosive rush % of 15%.

Richard Lagow hooked up with Nick Westbrook for gains of 22 and 37.  Luke Timian also added a 31 yard catch.  The big plays were all important in their own way.  The first big Westbrook catch came with Indiana having the ball on their own 1 yard line.  Three plays after Westbrook’s catch IU was forced to punt, which was blocked.  While Michigan would make a field goal on their ensuing possession, the big play probably prevented the Wolverines from scoring even more points.  Had IU punted from their 1, it is entirely possible Michigan scores a touchdown on the blocked punt, especially given that Gedeon would have only been 10 yards back instead of the normal 15.  Even if he had gotten the punt off, it is entirely possibly Michigan would have ended up with better starting field position than the IU 44 which would have made it easier for them to score a touchdown.  Sometimes the big plays don’t directly lead to points, but have an impact on the game.

Indiana’s other 2 big passes came on their 2 scoring drives.

Michigan was right on par with what IU typically allows in big plays.  They had a 10% explosive pass rate compared to the 9% Indiana has allowed this year and a 13% explosive rush rate compared to the normal 14%.  The third quarter was particularly full of big plays. De’Veon Smith had rushes of 13, 34, and 39, the latter 2 for touchdowns. John O’Korn’s 30 yard scramble on 3rd down was particularly problematic.  Not only did Indiana fail to sack O’Korn which would have given IU great field position following the punt, but one play later Smith was in the endzone.

It was an inefficient day for all offenses involved, but none more than the Michigan pass offense.  The John O’Korn-led offense had just 3 successful passing plays.  His first pass of the day went to Ty Isaac for a 21 yard gain and a first down.  His final pass of the day was a 12 yard pass to Amara Darboh for a first down.  He also had a 30 yard scramble on a designed pass play.  Other than those plays, Michigan had 17 pass plays for a total of 17 yards including 2 sacks.  At one point, Michigan had 13 unsuccessful pass plays in a row.  The 15% passing success rate was by far the lowest that Indiana has allowed all season.  The next lowest amount was 25% against Ohio State.[ref]Maybe the key to being a top 5 team is to have inefficient passing games?[/ref]

The Michigan rushing game ended with a 33% success rate, slightly lower than the 36% that Indiana has allowed in 2016.

For Indiana, it was a tale of two halves.  The first half saw Indiana post a 43% success rate including 55% in the air.  Unfortunately terrible field position resulted in IU only scoring 7 points.  The second half saw the Hoosiers post of 27% passing success rate and a 21% rushing success rate.  Indiana’s starting 3 receivers received the bulk of the targets, probably due to the slower than normal pace of play.  They posted a 50% success rate on their targets compared to just 1 success on 8 targets for the rest of the team.

It’s also worth noting that the BNL formation had a 57% success rate rushing compared to a 23% for the traditional offense.  While the BNL cannot replace the traditional offense in sustaining drives, it has tended to be above average in short spurts which is exactly how Indiana should utilize it.  I said it yesterday, but I’m not sure why Indiana didn’t go with the BNL inside the 10 yard line on their 2nd scoring drive, especially after the success of the first.

Such a brutal day for the Hoosiers regarding field position.  The first half was particularly challenging despite the great performance by the defense only allowing 3 points on 6 Michigan possessions.  Unfortunately due to great special teams by the Wolverines and the inability of the Indiana offense to flip the field, IU’s first half starting field position was their 14 compared to their 35 for Michigan.  The second half wasn’t much better as Michigan started in Indiana territory 3 times.

All in all, Indiana started better than their 25 yard line once, and that was on their final possession, down 10 with 53 second left.  Michigan started on the 25 yard line or worse on only 4 possessions.

Welp, Indiana finished with 5 points per scoring opportunity, a season high. Unfortunately they only had 2 opportunities, a season low.

The 3.33 points per scoring opportunity tied the 3rd best mark Indiana has allowed this year and was a point less than the 4.3 they’ve averaged this year.

No turnovers!  The downside is that IU probably needed to force some turnovers to pull off the upset.  The positive is that the Hoosiers didn’t turn the ball over, although they did have 2 punts blocked.  Richard Lagow has now thrown 94 consecutive passes without an interception.  This previous high was 60.