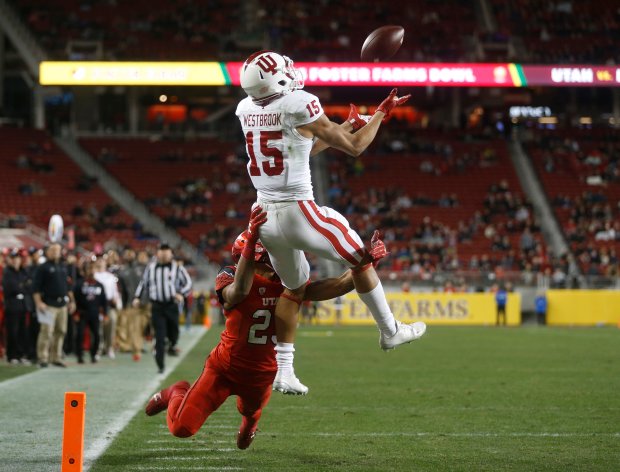 I’m not going to dwell on the final game coordinated by the lesser of the two Kevins, but the Foster Farms Bowl happened, therefore the film must be studied.

In total, IU’s 33 called runs totaled 134 yards, good for 4.1 yard per carry. Against a slightly above average rushing defense, this was an average to below-average rushing performance by a team with a rushing attack that, for the entire season, was outright bad. In that sense, IU’s rushing performance was probably slightly better than we had any right to expect. When he wasn’t fumbling inside the Utah 5, Devine Redding ran hard. Ricky Brookins had some strong outside runs, while also picking up tough yards between the tackles.

Schematically, there were a few small differences in Wilson’s absence (more counters, some tackle pull), but the bread-and-butter of inside and outside zone remained the same. The biggest shift was the abandonment of the Bacon ‘N Legs or any other Wildcat-style personnel (like we saw with Camion Patrick against Michigan). For a team that struggled to run the ball conventionally throughout the season and that had some success with these other schemes, I found this a little surprising.

The Passing Game Was Decidedly NOT FINE

First off, Lagow’s receivers didn’t do him any favors. Five drops was a season high. Devine Redding’s drop of a perfectly set up screen pass was particularly costly. Had Redding brought it in, there was no one between him and a big gain and possibly a TD.

As you will note on the chart, however, four of the five drops came on short passes. IU’s downfield passing woes rest more squarely on Lagow’s shoulders. On passes that traveled more than 10 yards downfield, Lagow was 5 of 15 for 69 yards (4.6 YPA), with 1 TD and 1 INT. This on the heels of a 2 for 9 performance on such passes against Purdue. Suffice to say, Richard did not end the season on a high note.

And this wasn’t a protection issue. Going into IU’s last drive, the O-line had allowed just 6 pressures on 36 dropbacks for a pressure percentage of just 17%. Against a defensive line with the pass rushing talent of Utah, a 17% pressure percentage is good to quite good. [ref] On that final drive, with no possible rushing threat due to time and score, the Utah pass rush generated 4 pressures on 7 dropbacks.[/ref]

Simply put, Richard Lagow must improve in 2017. In fact, with a new offensive coordinator and QBs coach, if he doesn’t show improvement in his decision-making, accuracy, mechanics and pocket presence as soon as this spring, he could find himself in a battle for playing time with Austin King or Peyton Ramsey in August.