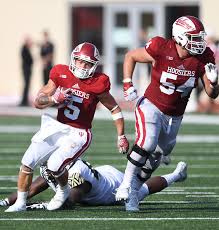 With the 2016 season officially in the rearview mirror and Signing Day and spring practice approaching, it’s time to update the depth charts. We’ll start today with the offense.

A few notes on this chart:

We might as well start with the position group that has the least depth of any on the team. The graduation of Dan Feeney, Dimitric Camiel, Jacob Bailey and Wes Rogers – as well as the departure of Tim Gardner last offseason – have really thinned out the ranks heading into 2017. Excluding early enrollee Tyler Knight (who is technically not a freshman yet), IU has just 9 scholarship O-linemen at the moment, and only 5 of them have seen game action.  In terms of the actual depth chart, there’s quite a bit of uncertainty.

The starting 5 shown above is my attempt to get the 5 linemen with game action on the field at the same time. This is complicated by the fact that three of those guys – Coy Cronk, Delroy Baker and Brandon Knight – have only played tackle, and none of the five have played center.  My strong suspicion is that the left side of the line will remain unchanged, with Cronk at LT and Wes Martin at LG. The other three spots are anybody’s guess. Mine is that Stepaniak will slide down to center, Brandon Knight will move from tackle to RG and Baker will move into the starting lineup at RT.  I could also see Baker at RG and Knight at RT or Knight at center and Stepaniak at RG.

As for the second team, it’s little short-handed and a lot lacking in experience, with only 4 players and 0 career game action (let alone starts). Hunter Littlejohn and Mackenzie Nworah could challenge for starting roles at the interior line spots. Devondre Love and Grayson Stover have ideal size for the tackle spots, and that’s about all we really know about them right now.

On the bright side, there isn’t a senior in the bunch so this group could grow together over the next 2+ seasons. 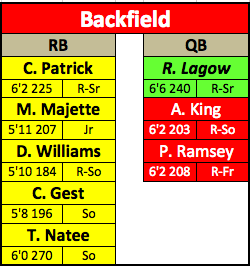 At quarterback, Lagow is the presumptive starter, but I think that presumption has been weakened by (1) his sub-par play at the end of the season, (2) the change in the offensive staff, and (3) new head coach Tom Allen’s stated preference for a QB that has some running ability. At this point, if either Austin King or Peyton Ramsey have strong spring and fall camps, while Lagow continues to struggle with turnovers, pocket awareness, etc., I could see a change to the top of the depth chart.  Ramsey has the advantage of having some running ability.  In case you’ve noticed Danny Cameron’s absence from this list, even though Cameron has hung around the 2nd or 3rd spot on the depth chart for the past two seasons, new QB coach Shawn Watson didn’t say a word about Cameron in his introductory remarks. For the time being, I’ve removed him from the depth chart.

At running back, with the departure of Devine Redding, Camion Patrick is the expected starter, despite having only carried the ball 4 times at the collegiate level heading into his final year of eligibility. I’ve seen and heard enough about Patrick to be on board with him as the starter, but I think the 2nd and 3rd backs will be more important this year than last, [ref] And arguably, since 2011, Wilson’s first season, when IU entered the year without a clear lead back.[/ref] when the exceptionally durable Redding led the group. Although it wasn’t discussed all the much, IU’s running backs, with the exception of Redding, were injury-riddled in 2016.  First, expected contributor (if not starter) Camion Patrick suffered a knee injury that required surgery during spring practice. He missed the first half of the season and aside from a few Wildcat carries against Michigan, was never really asked to work out of the backfield out of concern for wear and tear on the newly reconstructed knee. Once the season began, Cole Gest was lost for the year in IU’s third game of the season. Mike Majette went down against Maryland in late October and didn’t play in IU’s last five games.  Devonte Williams missed the Michigan and Purdue games with injuries.  By the Purdue game and the bowl game, IU was back to where it was at the end of 2015, asking walk-ons (albeit good walk-ons) Ricky Brookins and Alex Rodriguez to play meaningful snaps at running back. Hopefully, Gest, Majette and Williams will stay healthy in 2017, and perhaps one of them will emerge as the clear No. 2 behind Patrick.

Also, while I included Natee as a back in this depth chart, it remains to be seen how Mike DeBord and the new staff will view him. Big Bacon was very much Coach Wilson’s pet project, and 280-lb Wildcat QBs are not every offensive coordinator’s cup of tea. That being said, the guy has a unique skillset that I feel should be utilized in some form. To me, short yardage and red zone use makes the most sense.

The Hoosiers are in good shape here. On the outside, with Simmie Cobbs and Nick Westbrook, new wide receiver coach Grant Heard inherits the best returning receiving duo in the B1G and one of the best in the country. Assuming Cobbs comes back in at least his 2015 form and Westbrook maintains his 2016 level – and both could certainly improve – defenses will have a difficult time game-planning against two No. 1 wide receivers.

When Cobbs or Westbrook are on the sideline, IU can send out another big, physical, experienced receiver in Donovan Hale, along with a steady possession guy in Luke Timian, who probably has the best hands on the team. Redshirt freshmen Taysir Mack, Jonah Morris and Phil Benker could all challenge for playing time as well.

In the slot, the picture is a little murkier. My current depth chart has 2014 starter J’Shun Harris listed as the starter, but Harris is working his way back from his second major knee injury. If Harris is anything close to his 2014 self, he’s the best slot receiver IU has. If he’s not, then Isaac James or Leon Thornton could see more playing time or Luke Timian could move down to the slot. In fact, I would be surprised if Timian doesn’t see some time in the slot in 2017, as for parts of 2016, Timian was Mitchell Paige’s primary sub at slot receiver.

At tight end, Danny Friend was a steady hand and a solid blocker in 2016. While Friend remains the best blocker of the bunch, Jordan Fuchs, assuming he recovers fully from the ankle injury that ended his 2016 campaign just a few plays into the 2016 opener,  and Ian Thomas are much bigger threats in the passing game. Coming off a strong performance against Utah, Thomas may be the best combination of blocking and receiving.

Check back on Thursday for an updated defensive depth chart.