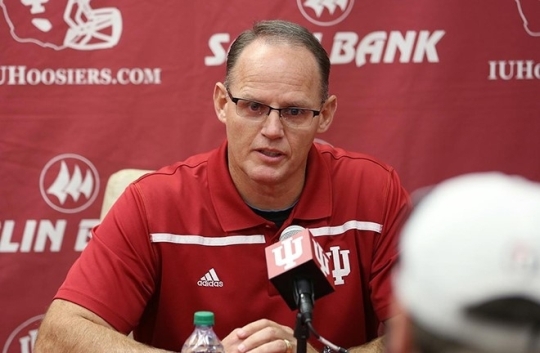 So after two months as head coach, during which one of his many tasks was finishing up the 2017 recruiting class, what do we know about Coach Allen, the Recruiter?

The short answer is, well, not that much.  We can, however, start to tease out a few tentative conclusions based upon Allen’s first class and statements he made about that class:

Coach Allen’s staff decisions provide some additional insight into his recruiting philosophy or perhaps the emphasis he places on an assistant’s recruiting ability. Of his four hires (all on offense), only one, WR coach Grant Heard, has a reputation as a strong recruiter. Mike DeBord brings a steady, experienced presence to the staff, but I haven’t heard anyone at Michigan or Tennessee (his last two CFB jobs) singing his praises as a recruiter. Darren Hiller and Nick Sheridan are largely unknowns as recruiters at the Power 5 level. While one or both could end up as good recruiters, it is safe to say that neither was hired based on his ‘crootin rep.[ref] Sheridan in particular should be expected to carry a heavy load on the recruiting front. He’s a young guy who should have all the energy in the world and no problems connecting with the kids he’s recruiting. And he has no experience as a collegiate QB coach so he needs to bring something to the table…[/ref] Luckily for Allen, he retained probably the two best recruiters from Coach Wilson’s staff – Mark Hagen and Deland McCullough.

With all that in mind, Alex Kirshner had an interesting piece over at SBNation about the leap forward that many new head coaches make in recruiting between years 1 and 2. The idea is that new coaches generally start anywhere from late November to mid-January and don’t have sufficient time to make a difference in their first class by Signing Day just a few weeks later (and coaching transitions often lead to some defections from the previous staff’s initial class as well). By the following Signing Day, the coach will have had a full year to build relationships, scout, instill a culture, possibly show some success on the field, etc. and that leads to a jump in recruiting rankings. Coaches also benefit from the momentum of “new blood” and selling change and a bright future, without having to show actual progress on the field – because even if the team struggles in that first year, it can still be blamed on the previous regime. For example, DJ Durkin and Chris Ash both made significant improvements in recruiting in Year 2, despite middling and downright bad on-field performances, respectively.

Interestingly enough, Wilson didn’t really make that jump from year 1 to 2 – both his first and second classes were ranked 57th. He made his jump between years 2 and 3, moving up 15 spots to 42nd. That actually makes sense in that Wilson’s first year was really Year Zero, as he almost entirely rebuilt the team that Bill Lynch left him. This prevented him from building any kind of momentum during the 1-11 2011 season.[ref] And, just by the way, I would argue the 2012 class was extremely underrated at 57th nationally, so in retrospect, he actually did make recruiting progress between Years 1 and 2.[/ref]

Allen will not have a Year Zero.  Instead, he has the benefit of one of the most talented – if not THE most talented – teams that IU has put on the field in the last 30 years. At the very least, when Coach Allen is making the final push for his 2018 class in December and January, he should be selling IU’s 3rd consecutive bowl appearance.  There is every reason to expect a recruiting bump of some size.  Allen’s ties in Indiana and Florida, and the overall stability of the program suggest that it could be a significant jump.  Uncertainty regarding the new staff and Allen’s overall ability to serve as CEO and Head Recruiter for a B1G program perhaps signal that we shouldn’t get ahead of ourselves. At this point, with what little we know about Allen and his staff, I’m not sure we can forecast a major recruiting breakthrough in 2018, but I would be very surprised if there isn’t some improvement.