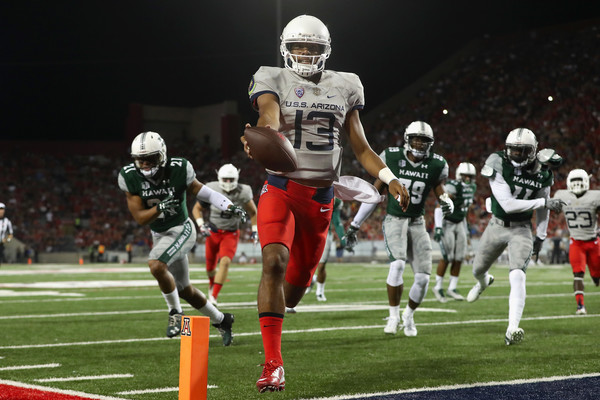 Unfortunately for Indiana fans, most of the explosions were limited to the sky as the football team struggled to generate big plays in 2017.

The percentage of explosive plays[ref]Defined here as rushes of 10+ yards and passes of 20+ yards[/ref] on both rushing and passing plays declined in 2017.

Morgan Ellison and Cole Gest impacted this team’s explosive rush rate the most because they had the most carries, combining to rush for 10+ yards on just 9% of their carries.[ref]While this level of explosiveness is below average, there’s certainly more big play potential than the “no explosion at tailback” that Gerry Dinardo declared[/ref]

Both of these players return, which means that, to a certain degree, they must improve for  Indiana’s overall explosiveness to improve. The good news is that the offensive line, with everyone back and another year of experience under their collective belt, should be improved, which should give Gest and Ellison more space and opportunity for long runs. For Ellison, it’s not a question of power or strength – breaking tackles is not a problem. The question is whether he possesses the speed and/or elusiveness to be an explosive back. On the other hand, Gest’s speed is not in doubt. His problem last year was breaking that one tackle or making that one defender miss that would lead to a long gain. Expecting incremental improvement by one or both backs is reasonable. Expecting anything more than that probably isn’t.

As a note, just because we state that these players aren’t explosive doesn’t mean we don’t think they aren’t good running backs.  Tevin Coleman was great because he was explosive.  Jordan Howard was also great, but was known much more as a powerful, efficient runner.  Even if you blame the line last year, there’s no denying that when Indiana running backs made it into the second level, their big runs weren’t as big as we’ve seen.[ref]Although this doesn’t include statistics from the final 2 games of 2017, the same point stands.[/ref]  Explosiveness is important, but it clearly isn’t the only metric by which a running back should be judged.

This isn’t to say that the Hoosiers are destined to struggle generating explosive runs.  In his time at Arizona, quarterback transfer Brandon Dawkins demonstrated a fantastic ability to create big plays on the ground.  His explosive rush rate was nearly 23% over his 3 year career.  Compare that to Peyton Ramsey who averaged 12% on designed QB rushes and 9% overall on rushes.[ref]He had 14 plays that were originally pass plays but where he ended up scrambling.  They are counted as rushes in the box score, but we generally treat them as the pass plays that they were originally called.  None of these plays reached 10+ yards.[/ref]

Indiana adds not only a quarterback with a higher rate of explosive plays, but a quarterback that should run more often than Ramsey.  In fact, it wouldn’t be shocking to see Dawkins lead Indiana in carries.  His best skill is rushing the football and the main reason to limit him would be an attempt to decrease the risk of injury.

The Hoosiers also add running back Ronnie Walker to the mix.  He projects as a more explosive back than Ellison, but it remains to be seen how much he’ll play.  It might be dependent on injuries because if the Hoosiers are at full strength, there are only so many carries to go around.  Even Tevin Coleman only averaged slightly more than 4 carries a game his freshman year.  If Mike Majette is fully healthy, it’s safe to assume he’ll receive a few carries a game.[ref]Majette showed promise in limited time in 2015 and 2016 before having a lost season in 2017.  His career explosive rushing rate is 10%.[/ref]

If the Hoosiers improve their rushing explosiveness in 2017, it’ll likely be on the legs on Brandon Dawkins.  Freshman cornerback Reece Taylor could add some big play potential on offense and maybe Walker or another running back emerges[ref]Perhaps Craig Nelson since we are focused on explosiveness[/ref], but more than likely Morgan Ellison leads IU’s running backs in carries again.  Certainly Indiana’s strength and conditioning seems to be improved so perhaps he adds a little burst and top speed.  Maybe Cole Gest breaks a few more tackles.  However even with improvement, it’s likely Ellison and Gest are average, at best, in this area again.

Putting it all together, there’s no reason that Indiana can’t get back to the 13% explosive rate they averaged in 2016.  As long as he stays healthy, it’s not a far climb when you factor in the explosiveness Brandon Dawkins adds.