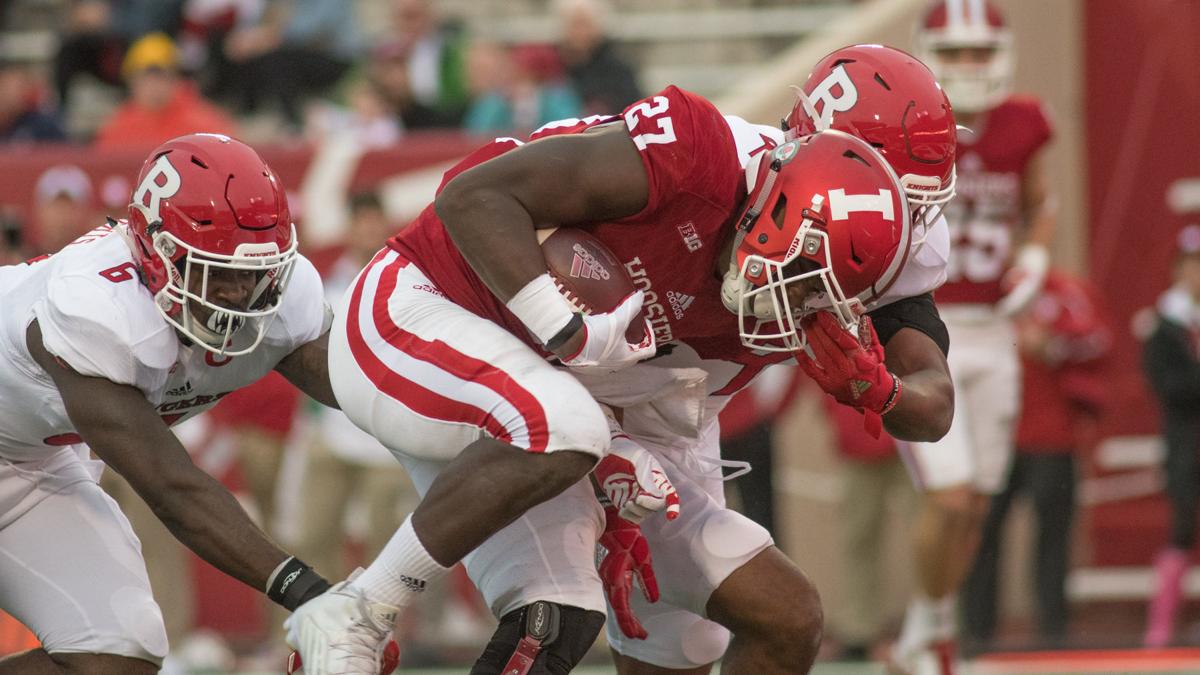 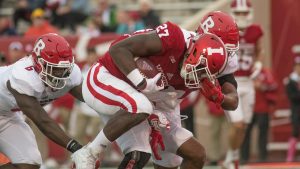 It’s clear that this has been a 2-year downturn in the production of the IU running game.  As we talked about previously, fault lies with both the backs and an offensive line that has seemingly underwhelmed.

How will the Hoosiers improve?

Creating a cohesive offensive line will be a good start.  The addition of Nick Linder at center bolsters not only the starting lineup, but improves the quality of Indiana’s 6th man who can start in place of injury[ref]Or just rotating in to give a breather.[/ref]

The right side is a bit of a question mark with Brandon Knight, Delroy Baker, Hunter Littlejohn, Simon Stepaniak, Mackenzie Nworah, and Harry Crider all possibilities.  As a group, there’s a lot of playing time experience.

It’d be pretty surprising, given what Indiana returns, if the offensive line isn’t better than last year.

Which brings us to running back.

While Morgan Ellison faded down the stretch with just 43 carries in the final 5 games including sitting out against Maryland with injury, he was by far Indiana’s best running back.  His opportunity rate[ref]The percent of carries gaining 5+ yards[/ref] was 39%.  For comparison, in his first two seasons at UAB, Jordan Howard averaged 40%.  Indiana’s other running backs combined to average 23% in 2017.

Ellison is a talented back and one that can help keep Indiana out of obvious passing situations.  But I’m not convinced he can be a workhorse back nor do I think the staff wants him to be a workhorse back in the traditional sense.  He missed two seasons in high school, breaking his left leg his sophomore season and his right leg the following year.  He missed time last season due to injury.  And he missed part of spring practices, including the spring game, with a lower leg injury.  It’s probably not fair to call him injury-prone at this point, but it seems it would be worthwhile for the coaching staff to keep an eye on his carries.

While I have little doubt of the efficiency of Ellison when he plays, the rest of the running back group is relatively unproven.

Cole Gest has glimpses of being a more productive back, but up to this point has been inconsistent.  He feasted during garbage time with a 63% success rate, but his non-garbage time success rate was only 33%.  Mike Majette showed promise as a freshman, but injuries have really limited him.  His career success rate is only 30%.  His career stuff rate[ref]The percentage of carries for negative yards or no gain[/ref] is 30%.[ref]For comparison, Morgan Ellison was at 17% last year.[/ref]  While there’s potential with both Gest and Majette, neither has put it all together over a significant period of time.

There’s always the possibility of a back with little or no game experience emerging.  It is more than likely that one will, even if their carries are limited. A few days into fall camp, true freshman Stevie Scott is an early contender.

And then there is Brandon Dawkins.  We mentioned already about his big play ability rushing the ball.  But he’s also efficient when he takes off.  His opportunity rate in his career at Arizona was 51%.  In 2016 when he was the primary QB, Dawkins was 6th nationally among QBs with 100+ carries in opportunity rate.  Some guys by the name of Lamar Jackson and Quinton Flowers were ahead of him.  But he was ahead of Joshua Dobbs, Josh Allen, DeShone Kizer, J.T. Barrett, Jalen Hurts, and Deshaun Watson, all of whom qualified with 100+ carries.

Peyton Ramsey had an opportunity rate of 40% while having the third most carries for the Hoosiers.  While he is mobile, Ramsey isn’t the runner that Dawkins is.  The senior transfer should have more success rushing as well as an increase volume of carries.  Where Ramsey had 27% of the non-garbage time carries from the Virginia game through the Maryland game, it wouldn’t be surprising if Dawkins neared the 35-40% carry share mark.  Coach Tom Allen has talked for a year about having a mobile quarterback and the challenge that causes a defense.  Now is that time.

It’ll be hard for this team to reach the rushing efficiency levels of the 2014 and 2015 teams.  That’s a lofty goal.  But there’s no reason this team should not surpass the 2016 and 2017 teams and be merely average.  There’s also top 50 potential if Dawkins and Ellison stay healthy and a 2nd back emerges.