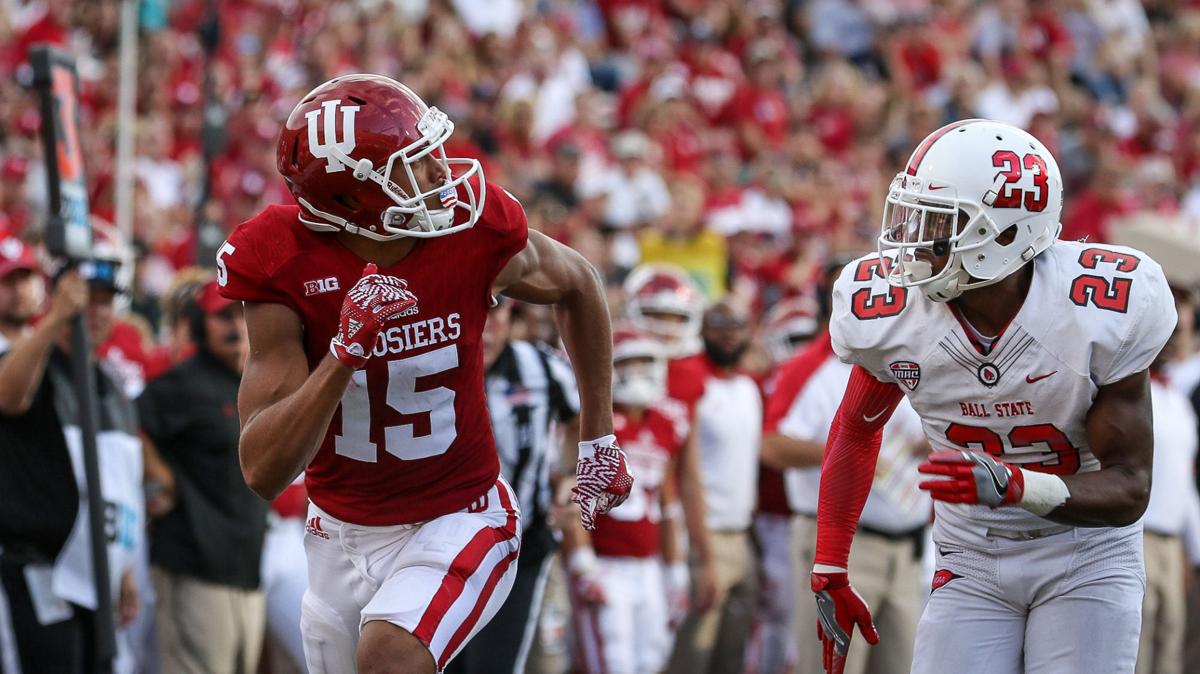 We talked previously about Indiana’s lack of explosiveness on the ground.

The passing game similarly struggled in 2017.

The 8% was the lowest since 7% in 2014, the season in which Nate Sudfeld suffered a season-ending injury against Iowa.  Breaking down that season shows an 8% rate with Sudfeld and a 6% rate without him.

In terms of explosiveness in the passing game, there was only a slight difference between Richard Lagow and Peyton Ramsey last year.  Lagow had an 8.2 % explosive rate versus 6.8% for Ramsey.

From a receiving standpoint, Indiana lost tight end Ian Thomas who had a 15% explosive rate[ref]The total number of 20+ yard catches as a percentage of targets[/ref] in his 2-year Indiana career.  Simmie Cobbs had a career 12% mark, although he only averaged 8% last year.[ref]Compared to a combined 18% in 2014 and 2016[/ref]  Devonte Williams had a 10% career mark.  Losing 3 of the 7 players with a career explosive rate of 10% or more isn’t ideal,[ref]Actually it is 3 of 8 if you could Brandon Knight’s 50% explosive catch rate.  I’m sure Brandon would like us to count it, but we’ll refrain for the time being.[/ref] but the cupboard isn’t exactly bare despite the comments from Big Ten Networks “pundits”. 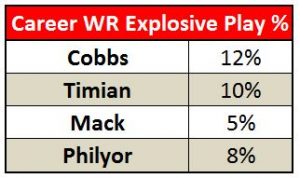 For starters, Nick Westbrook returns and should be Indiana’s primary receiver.  His 16% career explosive rate is higher than Cobbs.  Since 2014, his explosive rate is the best for an IU pass catcher among players with 20 or more non-garbage time targets.[ref]Sorry, Brandon[/ref]  While explosive rate can vary season to season and Westbrook is returning from injury, he seems primed to inject some big play ability to an area desperately needing it.

Also returning from injury is Donovan Hale.  His big play ability is the primary reason he’s on the field.  Since he’s not the all-around receiver that Westbrook is, Hale won’t see as many targets as Westbrook.  But when he is on the field he should be utilizing his size advantage downfield.  His average depth of target, in his 3 games last year, was just over 13 yards downfield.  When the big fella makes a catch, it is generally for a decent gain.  In his career, 6 of his 21 receptions have gone for 20+ yards.  Having him back for more than 3 games this fall adds another boost.

Luke Timian has a 10% career explosive rate proving more than capable.  His ability to generate big plays is somewhat dependent on his positioning either at slot or the outside.   Nevertheless, the player that will likely see the second most targets is, at worst, average in this regard.

While I think most were disappointed that Taysir Mack transferred,[ref]Me included[/ref] his big play ability was less that you’d expect.  His explosive rate was just 5%, mostly due to his low catch rate, despite having an average depth of target of 10 yards.[ref]On plays that he did catch the ball, his explosive rate was 13% which was above average.  He was fine with the ball in his hands.  It was the catching part that was problematic.[/ref]   Compare that to Whop Philyor who had an 8% explosive rate with an average depth of target of less than 6 yards.  Whether Whop plays in the slot or outside his strong catch rate and electric speed gives him a chance to make a big play.[ref]Because you can’t make a big play if you don’t catch the ball[/ref] 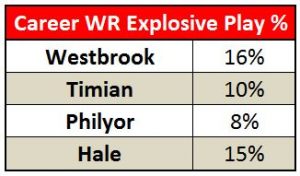 Considering the receivers in front of him, if Philyor is the third or fourth option in the passing game, the passing offense appears ready to be more explosive.

Additionally, J-Shun Harris has a 9% career explosive rate, although that figure jumps to 12% when you exclude his 2014 targets from Zander Diamont and Chris Covington.  Perhaps he is fully recovered and can provide depth at receiver.  Early notes from camp indicate that he will.  If that’s the case, Indiana adds another player with at least average playmaking ability.

At tight end, Indiana will miss Ian Thomas and it seems unclear how the committee will fill in that position.  I’m not sure you can count on much headed into the season.  Perhaps we even see more of the 4-WR sets that we started to see in the second half of 2017.

Similar to their running styles, the running back group also doesn’t generate an abundance of big plays through the air.  Devonte Williams was the best of the bunch, but he transferred.  It would certainly be nice to have a player with that skill set, especially for hurry-up situations.  Among returning players, a healthy Mike Majette probably fits that bill the best.  But as a whole, running backs saw less than 20% of Indiana’s non-garbage targets.  If IU struggles to have an explosive passing game again, the running backs won’t be the main reason.

The final question rests on the guy throwing the ball.  Since I’m pretty deep in the Dawkins at quarterback camp, I’ll assume he’s the guy.  In a different offense, his explosive passing rate was 9% over 2015-2017.  The rest of the Arizona quarterbacks were at 11%. This is likely due to Dawkins’ slightly lower completion rate since his 13 yards per catch average is the same as the rest of the QBs during this time period.

With Dawkins’ relative passing limitations, Indiana probably won’t be reaching Nate Sudfeld levels of big plays through the air.  But with the receiving core that returns, Indiana should be improved in this regard.  Additionally, if defenses have to respect the ability of Dawkins to run, it should open up more opportunities downfield.