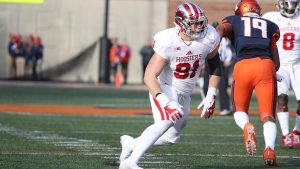 Over the next several days, we’ll look back at several aspects of the IU defense’s performance in 2017 as a means to look forward to 2018. Up first, tackling and run defense.

In this and upcoming posts, we are going to be comparing some observable stats from 2016 and 2017. In doing so, keep in mind that each season is different in terms of how much usable, non-garbage time data is created. The main reason is obviously that certain seasons feature more blowouts for and against IU than others, and we do not include data from garbage time[ref] Defined as when the game is not within 28 points in the first quarter, 24 in the second, 21 in the third, or 16 in the fourth.[/ref] in our stats. Additionally, any games against FCS opponents are excluded – generally not an issue but the canceled FIU game and Charleston Southern replacement brought it back in 2017. And of course, some seasons involve bowl games and others don’t.[ref] Like when a team can’t hold a 9-pt lead against a terrible Maryland team playing its 3rdstring QB, and thereby costs itself a 6th win. Speaking only in generalities here.[/ref]

2016 and 2017 are prime examples of how different two seasons can be in terms of the amount of usable data created. 2016 featured: (1) a bowl game; (2) no games against FCS opponents; and (3) most notably, only one half of garbage time[ref] The second half against Ball State.[/ref] for the whole season. As a result, our stats from 2016 are based on 12.5 games of data. By contrast, 2017 had (1) no bowl game; (2) a game against an FCS opponent; and (3) 8 games with at least a few plays of garbage time. Adding up all the garbage time works out to roughly two full games: half of each of the Georgia Southern, Penn State and Rutgers games, a quarter of the Ohio State game, and a handful of plays in the Wisconsin, Virginia and Purdue games. In total, the 2017 season provided just 9 games of usable data, or a 28% reduction from 2016.

As you compare stats between the seasons – at least with respect to counting stats like missed tackles, pressures, etc. – keep in mind that a performance level that remained constant between 2016 and 2017 would produce 28% less in 2017. 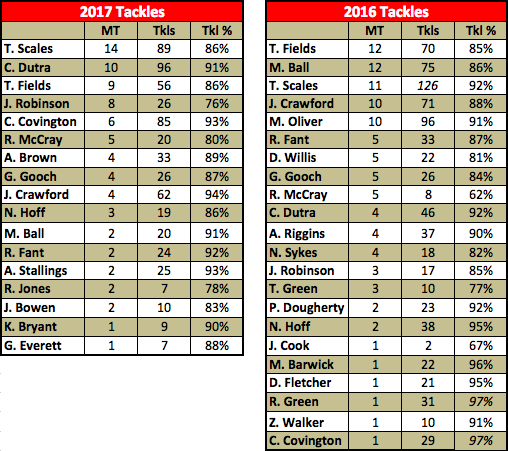 In the charts above, “MT” means “missed tackles” as tallied by me based on play-by-play review of each game. Only missed tackles in non-garbage time are included in the total. Because these missed tackle totals are the work of one human on a somewhat subjective basis – my standard is a hand on a ballcarrier counts, or a complete whiff by a defender in an open field, one-on-one tackling situation – these numbers should not be taken as gospel, but should instead be considered an approximation.

In total, the 2016 defense missed 103 tackles, while the 2017 unit missed 79. Using the “28% less” calculation, if the 2017 defense had missed tackles at the same rate at 2016, they would have missed 74, or 5 fewer than they actually did. In total, then, the 2017 defense tackled slightly worse than 2016.[ref] As an aside, the “Tkl %” calculations are not perfect because the missed tackles are limited to non-garbage time, while the tackling totals are pulled from IU’s official stats, which include garbage time and stats vs. FCS opponents. If we had strictly non-garbage time tackling rates, many of them would probably be slightly lower.[/ref]

From an individual standpoint, with a focus on returning players:

One final tackling note: IU missed 16 tackles against Purdue last season, by far their highest total of the season. I suspect that poor tackling performance was brought up a time or two in the offseason. The question is whether a far more inexperienced defense can improve upon 2017’s tackling, even if tackling was a point of emphasis over the past several months.

The charts above show the 2016 and 2017 IU defense’s per game (non-garbage time only) averages for running plays as divided into outside runs and inside runs. The charts show that, without factoring in quality of competition, the 2017 IU defense was slightly worse than its predecessor. However, one simple adjustment for opponent quality almost entirely accounts for the difference: the 2016 defense didn’t have to play running juggernaut Wisconsin. Take the Badgers out of the 2017 results and the rushing defense between the two seasons is more or less equal. Also of note, the 2017 rushing defense, although allowing a little more on a per carry basis than you might prefer at 4.8, was at least consistent, allowing the same YPC on inside runs and outside runs.

Looking forward to 2018, with Wisconsin once again off the schedule and with a fairly experienced defensive line, there’s a chance IU can return to 2016 levels. That said, IU’s young crop of linebackers will need to develop quickly for such a return to become reality.