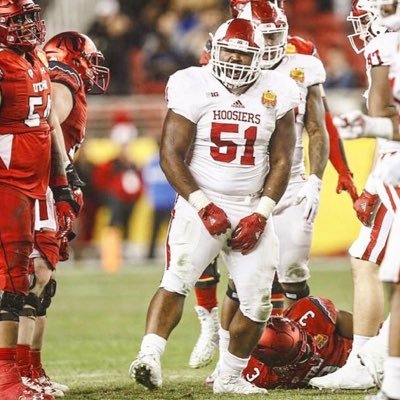 Today we’ll take a look at the 2017 IU defense’s performance in the pass rush, both on an individual and team basis.

Like yesterday’s chart of missed tackles, these charts track “QB pressures”, which includes sacks, knockdowns and hurries, compiled based on my play-by-play review of IU’s games. Again, there’s a little subjective aspect here with respect to what constitutes a “hurry.” I define it as something that makes a physical impact on the QB, even if there is no contact, usually an adjustment of a QB’s throwing motion or rhythm.

With that disclaimer out of the way:

Comparing the two defenses, IU blitzed less in 2017 (42% down from 49%), but had a more effective 4-man rush (24% pressure, up from 17%). The 2017 defense used 3-man rush more, with a little more success than 2016, and 6-man rush less, with significantly less success. In the end, the overall pressure percentage was identical at 29%. The 2016 defense was a little more effective at generating pressure when they blitzed (39% blitz/pressure percentage in ’16 compared to 32% in ’17), which somewhat helps to explain why more blitzes were called.

Its easy to follow the logic of Coach Allen’s blitz calls. In 2016, while he didn’t quite trust his 4-man rush, he liked his blitzers, including Ball at Husky, who wasn’t quite as useful in coverage. Fast forward to 2017, Allen had seniors at both DE spots, and after a few games, Tony Fields was filling in for the injured Ball at Husky. Fields represented an improvement in coverage, but didn’t have Ball’s blitzing ability. Accordingly, Allen dialed back some of his blitzing and relied more heavily on his line to generate pressure.

The numbers show that Allen used Scales – IU’s WLB – less as a blitzer in 2017. The WLB was involved in 41 blitzes in 2017, down from 77 in 2016. Using the 28% reduction discussed yesterday, if IU’s WLB had blitzed at the same rate in 2017, he would have blitzed 55 times, or 14 more than he did. It’s not entirely clear why Allen went this route because Scales is obviously an effective blitzer, but I see two likely explanations. The first I already mentioned – Allen simply didn’t call as many blitzes in general, choosing to deploy Scales in coverage while rushing 3 or 4. The second is that Allen viewed Scales as more effective in coverage than Covington, or at least that Scales’ and Covington’s relative abilities dictated that Covington should be the one blitzing most of the time.

Looking at the pressure percentages for the various blitz types, we see that the straight husky blitz (listed as 4 DL and Husky above) has been relatively unsuccessful for two straight years (25% in ’16 and 17% in ’17). The return and maturation of Marcelino Ball should help there, but it might make sense to cut down on that blitz in favor of bringing the Husky along with the MLB (listed 3DL, MLB and Husky above), where the pressure rates have been better (36% in ’16, 29% in ’17). Likely due in large part to the blitzing prowess of Marcus Oliver and Chris Covington, the MLB blitz was very effective in ’16 (39% pressure) and ’17 (46%). Moreover, the 6-man pressure of 4 DL and both linebackers has been solid, good enough for a combined pressure percentage of 53% across both seasons, although it is been used only 15 times total.

It’s also worth noting that Allen seemed to be a little more multiple in his blitzing in 2016, employing 15 different personnel groups on blitzes.[ref] And probably far more than that in specific blitz calls because there are almost certainly several different blitzes featuring 4 DL and the MLB, for example.[/ref] In 2017, that number shrunk to 11. It will be interesting to see if the defensive staff brings back a few more creative blitzes in 2018 as one way to make up for all of those lost pressures.

Tomorrow, we take a look at another aspect of passing defense – coverage.