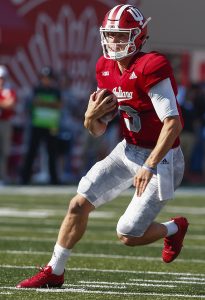 Starting at the top, I suspect most of you are surprised that Ramsey’s deep numbers – albeit a small sample size – are better than Lagow’s. Now part of that is a Lagow problem – for all his arm strength, Lagow wasn’t a particularly good deep thrower because most deep throws require a certain amount of touch and accuracy that often eluded Richard. Ramsey seems to have a little more of those skills, hence his higher yards-per-attempt and completion percentage on deep throws. Of course, he needs show improvement there in 2018. Moving his completion percentage above 40% while pushing the YPA above 12 and keeping the 3-to-1 TD/INT ratio all seem like perfectly attainable goals.

We’ll skip the intermediate level for now and instead jump down to the “Short” and “LOS” levels. In 2017, these throws, for which the priority is generally accuracy above velocity, were Ramsey’s strength. He had a better completion percentage and YPA than Lagow at both levels.[ref] Although Lagow appears to have been the victim of some bad luck, with 13 dropped passes in 137 short attempts, good for a 9% drop rate, much higher than Ramsey’s 3% drop rate at the same level. While luck likely accounts for much of the difference there, an argument can also be made that Ramsey throws a more catchable ball – both in terms of velocity and ball placement – than Lagow’s missiles.[/ref] Coach DeBord obviously realized this, as Ramsey threw roughly 78% of his passes 10 yards

or less downfield. While it would be easy to dismiss the importance of line-of-scrimmage throws, Ramsey’s prowess in that area should not be ignored. There were times in even the great Nate Sudfeld’s career in which he struggled with accuracy on bubble screens, and it cost IU a key first down or two. These throws can keep drives going, and with a missed tackle or two, can turn into big gains. With the playmakers at his disposal this season, if Ramsey hits on 90% of his LOS throws again, I expect a higher YPA than 4.4.

That said, he can be better on short throws in 2018 as well. In particular, Ramsey’s 64% completion percentage on short/left passes should be better. In general, Ramsey needs to work on passes to his left at all levels beyond the LOS. His completion percentages to the left at the intermediate and deep levels were lower than those in the middle of the field or to the right. Indeed, he failed to complete a single deep pass to the left.

The difference between Ramsey and Lagow is most stark at the intermediate level. First of all, Lagow simply threw a much higher percentage of his passes at this level. As the chart above shows, Lagow threw more than twice as many intermediate passes as Ramsey.[ref] And surprisingly, actually threw fewer deep passes, on a percentage basis, than Peyton.[/ref] Many times over the past two years, we commented that when Lagow was on, his intermediate passing numbers would show it because the nature of intermediate passes played to his strengths. These throws often require that the ball be thrown on a line, with some anticipation, and a certain tolerance for risk, as the windows between defenders may be small. Richard had no problem generating the necessary velocity to throw frozen ropes all over the field, and his tolerance for risk was…high to quite high. They also generally require receivers who can create some separation and make difficult catches in traffic.

Intermediate passing is where Ramsey’s ability to “get the ball down the field” is most in need of improvement. On the few occasions when he threw these passes in 2017, the results were not great. Ramsey’s intermediate completion percentage was roughly equal to Lagow’s once drops are factored in, while his YPA was almost 2 yards worse. He also failed to throw a TD at this level.

Looking to 2018, Ramsey’s improved core strength may give his intermediate passes a little more zip. But even without a significant uptick in velocity, Ramsey can improve. With an enhanced command of the offense and more familiarity with his receivers, Ramsey’s anticipation should improve, allowing him to throw some receivers open. Likewise, IU’s experienced and talented receiving corps can help Ramsey more than they helped either QB in 2017 by creating more separation and securing tough catches in traffic. All of these factors could easily push Peyton’s completion percentage on intermediate passes above 50% and his YPA above 9. If Ramsey can do that while continuing to avoid interceptions, the IU offense could take a significant step forward.