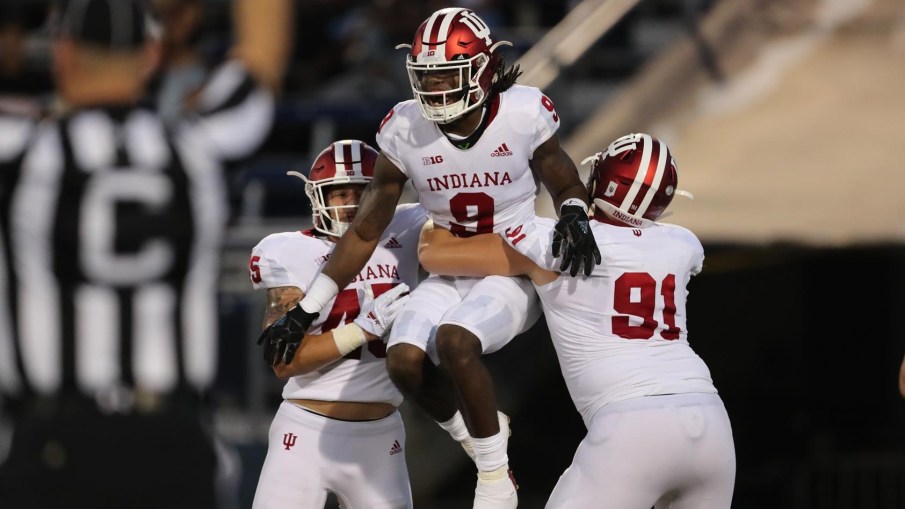 Two weeks’ worth of charts reveal a defense that, while young and far from perfect, may be starting to figure things out.

As a reminder, the little number next to each player’s name is the total number of possessions in which that player participated. Playing one play in a given series counts.

First of all, how about Andre Brown?! I’ve been critical of Andre’s coverage skills over the past few years, but through two games in 2018, Brown’s man has been targeted five times, and Brown is yet to allow a completion. And perhaps more importantly, he has not been penalized. This defense needed a shutdown corner to emerge, and maybe, just maybe, Brown is that guy.

Speaking of penalties, the secondary has been penalized at an alarming rate. In 2016, IU’s secondary was whistled for just six pass interference or defensive holding penalties.[ref] In 10 games of charting.[/ref] In 2017, the secondary drew 15 such penalties. In 2018, IU is on pace for a whopping 36 defensive holding or PI penalties. A’Shon Riggins had a rough night against FIU, getting called for 3 penalties.[ref] One of which was exceptionally weak.[/ref] Raheem Layne has only been called for one so far, but it was a big one, as his PI not only took away a game-sealing INT, it also gave UVA one more shot at the end zone.[ref] Of course, his return arguably benefitted IU by running precious time off the clock.[/ref] And true frosh Jaylin Williams has apparently decided to never allow his man to catch a ball, penalties be damned. He’s had the ball thrown his way twice, and he’s been called for a penalty each time.[ref] That being said, Williams was in for that final untimed down against UVA, and while it’s hard to tell who actually knocked the ball away, he was right in the mix.[/ref]

So two total pressures against FIU and a pressure rate of 9% isn’t great. In fact, that’s the lowest pressure rate since I started tracking it in 2016. The good news is that IU’s pressure rate ticked up to 26% against UVA, but that’s still below the 29% average that Coach Allen’s squad maintained in 2016 and 2017. It should also be noted that several of IU’s pressures against UVA were the result of Wahoo QB Bryce Perkins rolling out and drawing late pressure from a spying linebacker, rather than from pressure in the pocket. The man we expected to lead IU in pressures, WDE Nile Sykes, has yet to record one.

Against FIU, it is clear that IU’s relative struggle defending the run was not a tackling issue. In fact, only one of IU’s already-low total of four missed tackles came on a running play. The bigger problems seemed to be getting off blocks and keeping contain on bounce-outs.

On the contrary, IU’s front seven was more disruptive against UVA, while also maintaining their assignments. Tackling was a struggle, but I’m willing to chalk some of that up to the rain and to Bryce Perkins simply being difficult to bring down. Although you’d rather not have any missed tackles, it’s worth noting that several of IU’s missed tackles against UVA occurred in the backfield and contributed to the ultimate failure of the play. Although further improvement is needed, IU’s defense was better against the run – against an almost certainly better rushing team in UVA – in Week 2 than they were in Week 1.

One other note on missed tackles: Khalil Bryant had the key missed tackle on Perkins’ 47-yard scamper in UVA’s first drive. He missed another tackle later, and he got torched on a wheel route for a TD. But to Bryant’s immense credit, he continued to play the next play, and he made a huge open-field tackle on Perkins late in the game.

Check back tomorrow for offensive chart from the UVA game.