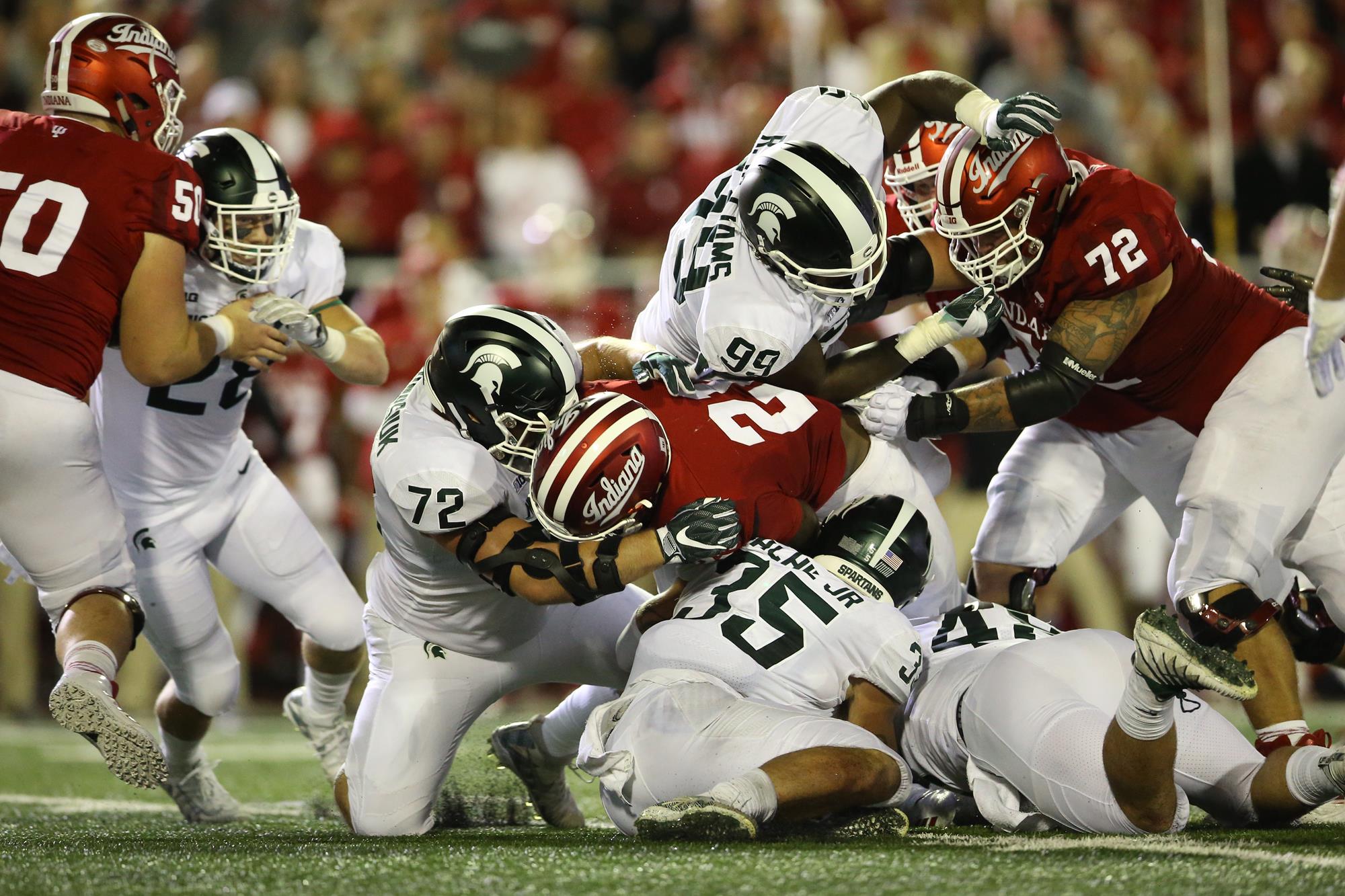 It was a game with an invisible rushing attack, several missed opportunities, and one crushing jet sweep.  A game that was full of hype, but ended up one that we’d much rather forget.  And hopefully one that Indiana forgets as attention turns to a must-win matchup on the road at Rutgers.  The Hoosiers opened as a 14 point favorite.

Down 14-0, midway through the 2nd quarter, Tom Allen went for it on 4th and 1 from the MSU 18.  I don’t fault the call to go for it, but unfortunately Scott was stopped for no gain.

Indiana would later add 4 more scoring opportunities, converting 2 field goals and 2 touchdowns including a 2-point conversion.  But it wouldn’t be enough as Michigan State scored a touchdown on all 4 of their opportunities.

The Hoosiers converted a 43% success rate on pass plays.  On actual passes, Ramsey’s success rate was 50% including 71% on attempts to Whop Philyor and 67% to J-Shun Harris.  Unfortunately Ramsey was under pressure frequently with just 25% of his scrambles being deemed successful and also being sacked 4 times.  That was bad, but their running game was even more dismal, recording just an 11% success rate.  For those keeping track at home, that isn’t good.  After a dominating start to the season, freshman Stevie Scott had just 1 successful rush on 11 carries.  It occurred on his first carry, a 5-yard run on 1st and 10.  After that he recorded 13 rushing yards on 10 carries including a 7-yard run on 3rd and 16.

Scott dressed and participated in warmups, but did not play in this one as a result of an injury suffered 2 weeks ago against Arizona State.  La’Darius Jefferson and Connor Heyward each had a long rush of just 6 yards.  Jalen Nailor’s 75 rush was the dagger for IU and was the only rush, other than a rush by Brian Lewerke that Indiana allowed to go for 10+ yards.

It’s hard to get much closer than this.  Lewerke went 14 of 25 for 213 yards, 2 touchdowns, and 2 interceptions.  He probably would have gone over 213 yards but Michigan State’s 21 fourth quarter plays consisted of 14 rushes, 3 kneels, and just 4 pass attempts.  Indiana is allowing 5.3 yards per pass attempt on the season, ranking 21st nationally.

There were no kickoff returns for the Hoosiers in this one.

The Hoosiers never led in this one, falling in their conference opener.  It puts more pressure on the Hoosiers in games against Iowa, Minnesota, Maryland, and Purdue.