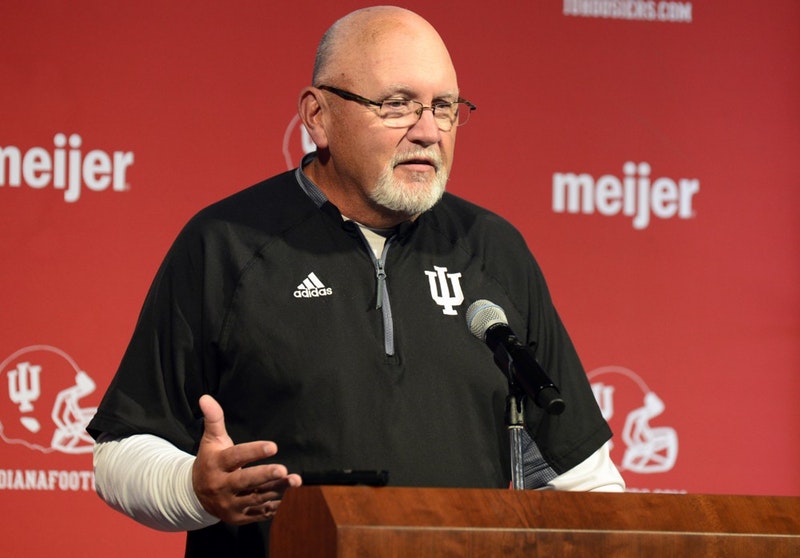 There’s been a lot of criticism, including here, about the 2nd half offense by Indiana against Rutgers.  That IU went super-conservative which allowed Rutgers back into the game.

In a closer look, I’m not exactly sure that’s the case.  Yes, Indiana ran it a lot more than the first half.  But situation (down, distance, time, lead) seemed to dictate some of it.

We’ll walk through the second half, play by play, and you can make your own conclusions.

A run on first down that sets up a potential passing situation.

Indiana goes back to the run.  And it works.  Sets up a 3rd and short.

Possibly a conservative move but Scott had converted 3 of 4 3rd and 2 plays in his career.  While the IU offensive line hadn’t dominated, Scott has proven to be a productive short yardage back.

Back to the running game.  No luck.  Sets up 2nd and long, an obvious passing down but one you wouldn’t be surprised if Indiana ran.  Especially deep in their own territory.

A pass!  Ramsey throws slightly behind Hendershot but the tight end makes the incredible catch and turns it into a 22 yard gain.  Momentum.

And back to the running game.  With IU still up 17, it isn’t exactly an egregious call despite the short gain.

With Indiana back in a passing situation the Hoosiers go back to the pass with a quick strike to Hale on the outside.  Same as the last 2nd and 9, it wouldn’t have been shocking to see the IU offense pound it up the middle again, but they appear to still have their foot on the gas, at least a little bit.

The Hoosiers switch it up and go with a bubble screen on 1st down, but it ultimately only gains 2 yards.  Still you can’t blame them for trying.

The Hoosiers called an audible on their original play and went with a Ramsey carry up the middle.  A 1 yard gain would leave the Hoosiers in obvious passing territory.

Ramsey dropped back to pass, but Brandon Knight was beat on the linebacker blitz so Ramsey had no time to pass.  It’s honestly a major testament to Ramsey to escape the untouched blitzer and scramble for a yard.

Ramsey dropped back to pass but when nothing developed, he scrambled right before ultimately throwing it away.

A screen pass to Reese Taylor picked up 5.  Still probably leaves Indiana in a passing situation.

Indeed Indiana goes to a pass.  Perhaps an extremely conservative offense goes with a rush, up 17, but Indiana passes for the 3rd consecutive play.  Ramsey’s initial looks aren’t open so he escapes pressure, scrambling to the right before finding Harris near the sideline for the first down.

Indiana goes back to the run.  I don’t see much wrong with that.

In an empty backfield, Ramsey quickly finds Harris for 6 yards.

3rd and 1.  An obvious rushing situation, especially with Scott in the backfield.  The freshman converts the first down.

You’d almost think that IU would go back to the run here, but instead Ramsey finds the running back on a pass when his other options weren’t open.

Can’t complain about running on 2nd and 5, up 17 early in the 4th quarter.  It didn’t work, but it’s by no means ultra-conservative.

An offsides penalty moved Indiana from a 3rd and 6 to a 3rd and 1.  A nice break for IU.  Another 3rd and 1 that Scott converts.

Scott fumbled near the end of his 3 yard run, but recovered.  You could argue that the coaches should take out a player who fumbles as a punishment, but I don’t know if you can argue running it on 1st down.

See above. Maybe Scott shouldn’t have been in the game, but there doesn’t seem anything wrong with running it on 2nd and 7.

Up just 10 now, but Indiana hands off to Ronnie Walker who shows nice burst on a 7 yard run up the middle.

Ramsey, flanked by Taylor in the backfield, possibly could have forced a pass to Taylor on his route, but up 10 in the 4th, there was no reason to risk it.  He threw it away.

A situation where IU could conceivably run or pass, although with Majette in the backfield the likelihood of passing was nearly guaranteed.

A huge hole created by the line gave Walker another explosive run.

This pass was nearly intercepted towards the left sideline.  An unnecessary pass.

After that close call, Indiana went back to the running game to milk some clock.

It’s really hard to argue a pass attempt into the end zone to your biggest redzone threat, and Hale would probably tell you he should have caught it. A passing TD there probably changes the narrative about the offense in the 2nd half.

OK, I get the idea that going up 17 with a touchdown is a lot more impactful than going up 13.   But Indiana didn’t even go for the first down.  They went for the touchdown and to J-Shun Harris.  Harris is a good possession receiver, but not exactly one you’d target 20 yards downfield in a compacted part of the field.  Not a smart call, but not a conservative call either.

After Scott’s fumble, we didn’t see him again.  Instead, fellow freshman Ronnie Walker got the carry as Indiana continued to run the clock.

Another carry up the middle that forced Rutgers to call their final timeout.  3:03 left

Indiana went back to the QB draw that worked so well on 3rd and 11 late in the first half.  It didn’t work out as well, but still ran valuable time off the clock.

Yes, there were a lot of runs.  But it wasn’t as if IU was running on 3rd and long hoping to just run some clock and then punt.  Indiana faced four 3rd downs in passing situations.  There was 1 pass play where nothing was open and Ramsey scrambled for a yard.  Two of these situations saw IU attempt a pass, one of which was converted.  And the aforementioned QB draw. I’d much rather have this type of boring second half than the 4th quarter IU had in their last lost to Rutgers where IU stayed pass-heavy and Nate Sudfeld tossed two interceptions.

Indiana will need to play better offensively to beat teams like Iowa, Minnesota, Maryland, or Purdue.  But with the expected returns of Luke Timian and Whop Philyor, IU will reinforce their receiving corps as they look to open things up the rest of the way.