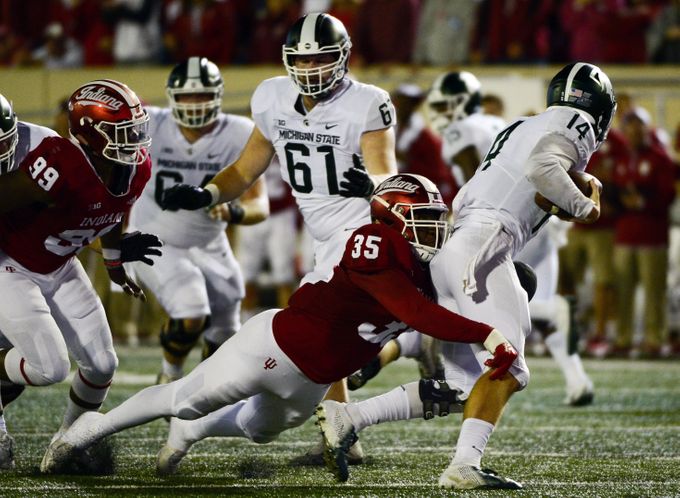 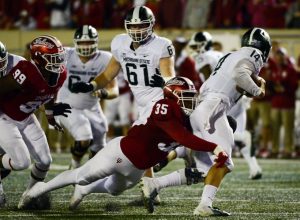 This week, we dig into two good-but-not-great defensive performances by the IU defense.

On the bright side, defensive ends Allen Stallings and Nile Sykes have begun to assert themselves. After combining for just 1 pressure in IU’s first 3 games, the duo has racked up 8 combined pressures in the last two games. D-line coach Mark Hagen has said that IU’s best pass rush personnel is when both Stallings and Sykes are on the field, and we’ve seen more of that in passing situations the past few weeks.

On the other hand, IU isn’t generating enough pressure from people not named Stallings or Sykes. Aside from those two, only one other pressure came from the rest of IU’s D-line against Sparty and Rutgers. Moreover, IU’s pressure percentages of 21% and 24% the last two weeks have been below average in the Allen Era. IU needs to find a few more pressures a game from somewhere. It doesn’t seem like any of the linebackers are particularly adept blitzers at this point. Jacob Robinson returning from injury should provide a boost, as he is far and away IU’s best pass rushing interior lineman. Of course, I wouldn’t rush him back this week… 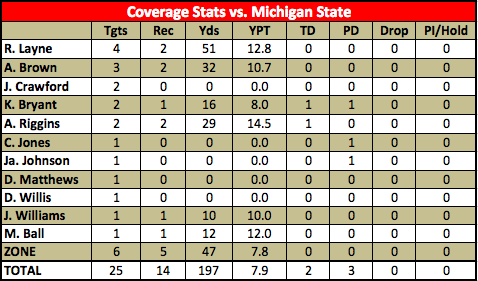 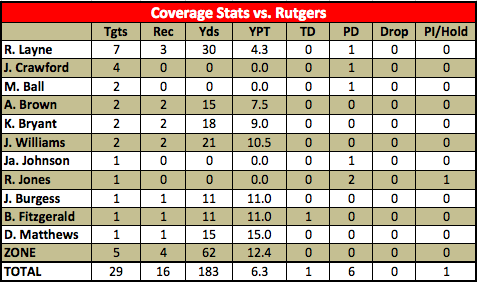 The secondary’s performance against Rutgers was somewhat better, although probably not as dominant as one would hope against an offense that has struggled as much as Rutgers has. IU’s freshmen – both the true and redshirt varieties – were targets here, as Jaylin Williams, Juwan Burgess, Bryant Fitzgerald and Devon Matthews all allowed more than 10 yards per target. That said, IU’s six passes defended, including one interception, is a season-high. That interception came from another true frosh, Jamar Johnson. All Jamar has done in extremely limited duty is record a PBU and an INT on the only two passes to come his way.

Looking ahead, this young secondary needs to grow up in a hurry. In the next three weeks, they will face: (1) one of the best pure passers in college football, Ohio State’s Dwayne Haskins, (2) a likely early round NFL draft pick in Iowa’s Nate Stanley, and (3) dual-threat stud Trace McSorley, who has cut IU up the past two seasons. The MSU and Rutgers games suggest that all three QBs will complete some passes, but the hope is this secondary can (1) limit truly big gains, which I would define as more than 30 yards, and (2) make a few plays of their own.

IU’s run defense was stout against Sparty…until it wasn’t. Down 7 late in the 4th and needing to force a 3-and-out, the Hoosier defense had problems with alignment, gap responsibilities and pursuit angles in giving up an untouched 75-yard jet sweep TD (but other than all that, they played it perfectly). Against the Scarlet Knights, IU’s run defense was again above average, with the possible exception of a 36-yd run on Rutgers’ first drive.

In the tackling realm, the big news is that Dameon Willis finally played a game without missing a tackle! Against Rutgers, three of IU’s missed tackles (Everett, Sykes and Jones) were on one 8-yd run. If you are going to miss a ton of tackles, sometimes it’s better to do it all at once and relatively close to the line of scrimmage. Nevertheless, through 5 games, tackling has not been a major concern for this team.

Again, looking ahead, I think we can expect the Ohio State offense to break a few big runs using some combination of J.K. Dobbins, Mike Weber and their speedy receivers on jet sweeps. The bigger question to me is whether IU can limit their other runs to 3 or fewer yards, rather than 4, 5 or 6. If IU has any chance of stopping Ohio State, it has to keep the Buckeyes off schedule.

Check back tomorrow for the offense’s Rutgers charts.