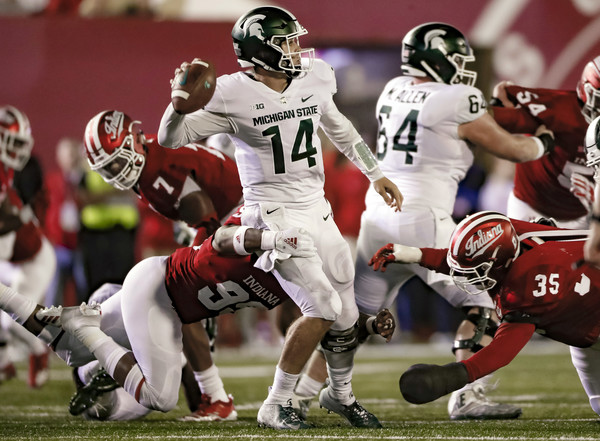 Iowa comes to town fresh off a 17 point victory over Minnesota.  The Hawkeyes are 4-1 with their only loss coming at Wisconsin.  In that game, they actually led deep into the fourth quarter before allowing 14 points in the last minute.  The Badgers scored with just under a minute left to take the lead.  Then on the subsequent third down, Nate Stanley’s pass was deflected and intercepted.  The Badgers would score another touchdown en route to earning the upper hand in the Big Ten West.

That’s how close Iowa is to coming into Bloomington undefeated.  Bill Connelly gives IU about a 39% chance at victory.

If Ohio State’s weakness defensively was giving up big passing plays, it could be Iowa’s strength.  The Hawkeyes have given up just 11 passes of 20+ yards, 14th nationally, and just 5 of 30+.  Meanwhile Indiana’s passing game had been more horizontal for the better part of 5 games.  But the Hoosiers took shots downfield against Ohio State.  It remains to be seen whether that was Indiana attacking a perceived weakness or a new look to the Indiana offense.  It would certainly be nice to see a more vertical offense than we saw the first 4 games.  Especially with receivers such as Donovan Hale and Nick Westbrook.  It would also be nice if Ramsey could connect with a wide open Reese Taylor behind the coverage.

The senior receiver has led the team in targets the past 2 weeks.  Against Rutgers he saw 9 targets and against Ohio State he had 14 passes headed his way.  He responded in both going 7 for 54 and then 8 for 104, his first game over the century mark.  Both those games have corresponded with the absence of both Luke Timian and Whop Philyor.  It seems likely that we could see one or possibly both this weekend which will likely cut into Harris’s targets.  Frankly, I had low expectations for Harris coming into the season off his 3rd ACL surgery.  He has already exceeded them, and his one-handed catch against Ohio State was ridiculous.

The Hawkeyes have allowed just 5 sacks on the season, tied for 14th nationally.  As a result, it will be a tough task for the Hoosiers to get to Nate Stanley.  IU recorded 3 sacks against both Ball State and Michigan State but have just 3 in the past 2 games.  Nile Sykes and Marcelino Ball lead the team with 2 sacks and 7 other players have recorded 1 sack.  Or, as it is known under Tom Allen, business as usual.  The Hoosiers haven’t had a dominate pass rusher under Allen with their leading sacker recording just 7 sacks in 2016 and 6 in 2017.  But the Hoosiers are able to generate pressure from multiple positions.

Iowa has 3 sophomore running backs that have each carried the ball 50+ times.  Toren Young leads the team with 286 yards.  He led the team in rushing the first 3 games with 84, 68, and 72 rushing yards. Ivory Kelly-Martin has been the leading rusher the last 2 games with 72 and 47 yards.  He missed the Iowa State and Northern Iowa games with an ankle injury.  Mekhi Sargent is the third RB of the trio and leads the team with 4 rushing TDs.  Indiana is allowing 4.1 yards per attempt this season, 67th nationally.  The most a running back has gained against IU this year is 89 by Ball State’s James Gilbert.

It should be beautiful football weather this weekend for the Homecoming game against Iowa.  The last time the Hawkeyes showed up in Bloomington was 2015.  The announced attendance in that one was 44,739.  This season, IU’s highest attended home game was Michigan State at 45,445.  Last year’s Homecoming game was against Michigan with an attendance of 52,929.