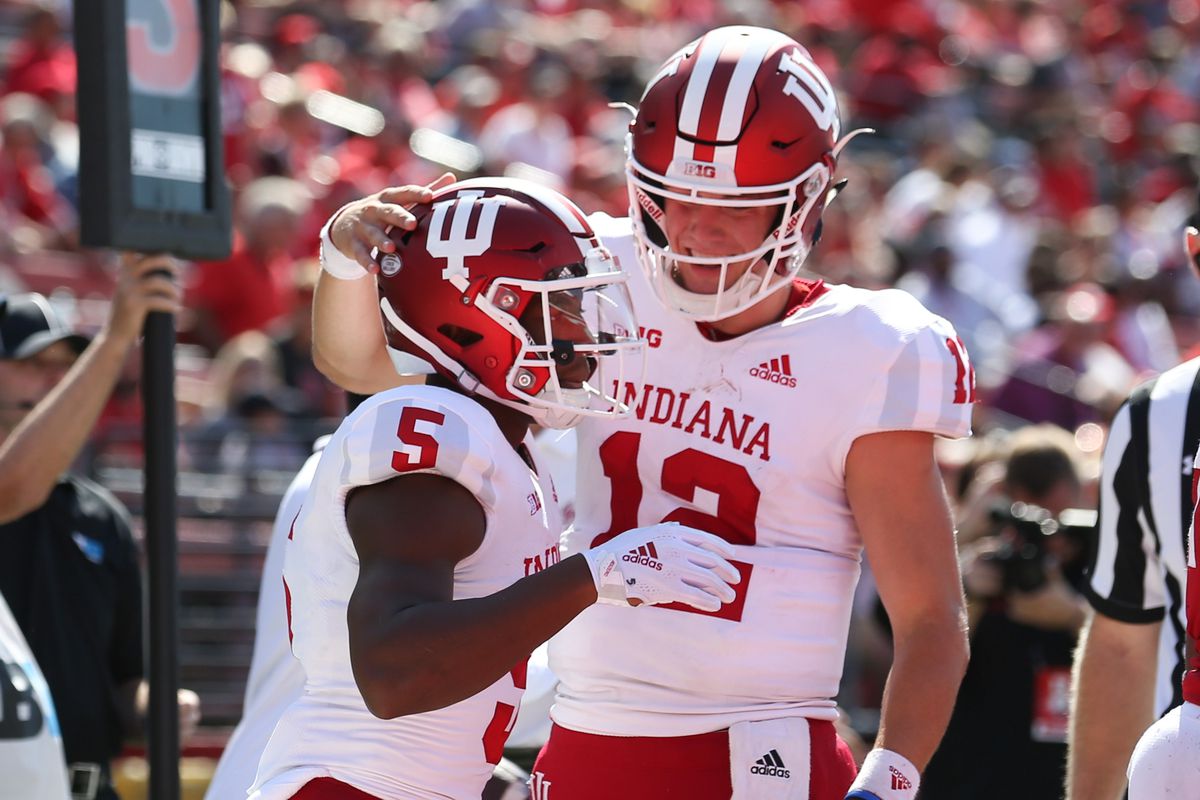 They threw the ball down the field! And it started out poorly…then it got better…then it went bad again. Read all about it below.

With the exception of a 45-yard run by Stevie Scott on IU’s first drive and a few QB draws by Peyton Ramsey, IU’s running game was mostly ineffective. Rather than delve too deeply into a result that was entirely expected, we’ll move right along to more interesting developments in the passing game.

Before we get to Ramsey’s passing, let’s quickly address pass protection. Given the opponent, this was an A- performance, if not a straight A. Tackles Coy Cronk and Brandon Knight, who just a few weeks ago appeared woefully over-matched against MSU’s D-Line, did not

allow a single pressure against Ohio State.[ref] After Cronk left the game late in the 3rd quarter, his replacement Delroy Baker allowed one pressure.[/ref] Sure, Nick Bosa didn’t play, but Chase Young, Dre’Mont Jones and the rest of the OSU defensive line are all NFL-level talents. More than half of the pressures allowed were “team” pressures that resulted from Ramsey leaving the pocket, and therefore cannot fairly be attribute to the offensive line. Take those out and IU’s pressure rate drops to an exceptional 8%.

This is no time for the O-Line to rest on its laurels. however. Iowa’s defensive line is among the best in the B1G and can easily create the same sort of issues that the MSU D-Line did if IU’s offensive line doesn’t continue its strong play.

Now, the performance of Mr. Ramsey. The chart below has his numbers from the 1st half:

From a deep passing standpoint, this was easily the best half of his IU career. For context, Ramsey only completed five deep passes in what was roughly half a season of playing time in 2017. For further context, in Richard Lagow’s 2017 game against OSU that was seen as a great performance, Lagow only completed two passes that met our definition of “deep” – traveling more than 20 yards downfield. Ramsey’s deep completions consisted of two 50/50 balls to Nick Westbrook that were on target, but necessarily required Westbrook to make a nice play on the ball; a throw with some touch down the seam to J’Shun Harris[ref] Again, Harris made an incredible one-handed catch, but the ball was nonetheless placed in the right spot, given the coverage.[/ref]; and a pass to a wide-open Peyton Hendershot on a well-conceived and executed throw-back play.

But Ramsey also left a few big plays out there. On IU’s third offensive possession, with IU trailing 7-3, Reese Taylor had a full 3 steps on his man on a go route and would almost certainly have scored had Ramsey not overthrown him. That drive ended in a punt. Later, Peyton overthrew Nick Westbrook on another vertical route on which Westbrook had beaten his man.[ref] IU scored a TD a few plays later.[/ref] I’m of two minds when it comes to these throws. On one hand, meh, QBs overthrow open receivers all the time. On the other, overthrowing clearly open receivers on vertical routes has sort of been a persistent issue for Ramsey. He missed an open J’Shun Harris in last season’s loss to Michigan State. He overshot a streaking Reese Taylor on IU’s first drive against Sparty this season. Now these two against OSU. Against those negative examples, I’m not sure I have a great positive counter-example on that type of throw/play. While we’re still talking small sample size, I think it’s fair to highlight this as a potential issue. I’m not sure if it’s something about the receiver’s openness on those plays that has just gotten Peyton a little too amped, but I would feel better if he hit one of them in stride here soon.[ref] This week against Iowa seems like an ok time…[/ref]

On to the second half…

After halftime, Ramsey’s only deep completion was another back-shoulder 50/50 ball to Westbrook. On the plus side, none of Ramsey’s misses were as egregious as those in the 1st. Two of the deep incompletions were well thrown balls to J’Shun Harris and Donovan Hale that were broken up by good defensive plays. The third was a badly overthrown corner route to Fryfogle, but it didn’t appear that he was open anyway.

That one drop – shown in the Short Right section – was costly. IU had a 1st and 10 at the OSU 38 late in the 3rd quarter, trailing by 9. On an otherwise stellar day, J’Shun Harris let a pass go through his hands on a drag route. The ball hit him in stride, and he had a step on his defender such that a catch would have been at least a 15 yard gain, putting IU deep in OSU territory, and might have been a TD that would have brought IU within a field goal. As it was, that possession ended in a punt.

Setting aside Ramsey’s deep passing, the lack of intermediate passing success was eye-opening, coming off the Rutgers game in which Ramsey completed  9 of 10 at that level. I suspect – and Coach DeBord’s comments this week all but confirmed – that this has more to do with the differences in how the respective defenses were playing the Hoosier offense. Rutgers’ soft zone left the intermediate routes open, while OSU’s tight man dared IU to throw it over the top.

All that said, if you’re looking for some brilliant conclusion or hot take on what IU should do going forward at QB, I can’t help you. At this point, we’ve seen about a full season of Peyton Ramsey at QB, split between 2017 and 2018. I don’t think it’s crazy to suggest that there has been improvement in his deep and intermediate passing. Is it enough to match what Michael Penix could do right now? I have no idea. The reality is that IU wasn’t beating Ohio State, regardless of who played QB last Saturday. Most IU fans didn’t expect a win anyway. I think most IU fans simply wanted to see the offense make a few more explosive plays, especially through the air. Ramsey and the offense accomplished that, while at the same time leaving fans feeling a little unfulfilled because of a few overthrown balls. Another reality is that IU’s season and its QB will be defined by how they perform in the four “winnable” games that remain on the schedule.[ref] Iowa, Minnesota, Maryland and Purdue.[/ref] The first of those is this Saturday. Let’s hope we see more of the Peyton Ramsey we saw in the 1st half on Saturday…but maybe without the overthrows.