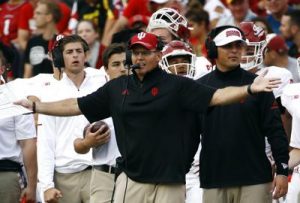 Indiana heads north to face Minnesota in their first matchup since the 2013 loss caused Kevin Wilson’s best Indiana team to miss a bowl game.  Despite a brutal defense that led to Doug Mallory’s departure following the season, the 2013 offense was amazing and something we’ve been yearning for since.

The offense was quarterbacked by both Nate Sudfeld and Tre Roberson who combined to lead the Big Ten in passing. That’s QB depth that the Hoosiers haven’t had since.

The receiving core had Cody Latimer who finished 3rd in the conference in receiving yards, jumping to the NFL after the season.  Kofi Hughes was the opposite receiver with Shane Wynn in the slot and Ted Bolser at tight end.

The running game was led by an emerging Tevin Coleman, backed up by Stephen Houston, the 2012 starter.

Despite all that, they missed going to a bowl game because of a fumble on a backwards pass against Minnesota.  Which brings us back to the game this Saturday.  Ah, thanks for taking a walk with me down memory lane.  Let’s get to the questions.

Indiana has trailed in every game this season with low deficit of 3 against Ball State and a high deficit of 26 against Iowa.  In their 4 wins, they haven’t faced a deficit greater than 7 points.  In those 4 games, they have led the entire second half.  In their 4 losses, the only second half tie or lead was against Penn State early in the 3rd quarter.  That lead lasted a whopping 1 play.  It’s safe to say that this Minnesota team isn’t at the level of Michigan State, Ohio State, Iowa, or Penn State.  But it’s also fair to wonder, given the questionable clock and play management, if Indiana is capable of coming from behind in the second half on the road.

A passing down is defined as a 2nd and 8 or more, 3rd and 5 or more, or 4th and 5 or more.  Indiana has one of the lowest run rates on passing downs.[ref]They also have one of the lowest run rates on standard downs[/ref]  The Hoosiers run in just 26.8% of these situations, well below the national average of 34.4%.  There’s nothing incoherently wrong with passing in these situations.  They are, after all, situations where the offense finds themselves off schedule and passes offer a higher expected gain per play.  The numbers bear this out.  In passing down situations thus far, Indiana has a 40% success rate passing compared to a 14% rushing.  Indiana will be facing a Minnesota team that has a defensive run rate on passing downs of 26.9% which ranks 121st nationally.  When teams get off schedule against Minnesota, they tend to go to the air which is exactly what the Hoosiers will likely do.

The junior linebacker for the Golden Gophers leads the Big Ten in sacks with 8 and is tied for 6th nationally in sacks per game.  Minnesota only has 13 sacks as a team so Coughlin is essentially their entire pass rush.  His sack rate, the percentage of sacks to pass attempts plus sacks, is 3.1%.  Meanwhile, Indiana has allowed a team sack rate of 5.2% although Peyton Ramsey’s rate is 5.9%.  This one might come down to how much Indiana passes.  After holding Iowa and Ohio State to a combined 224 rushing yards on 68 carries, Minnesota allowed Nebraska to rush for 383 yards on 43 attempts.  Meanwhile, Indiana broke out of their rushing slump by going for 268 yards on 39 attempts against Penn State.  We’ll see if either is a one-game aberration or the start of a trend.

Minnesota is 111th in rushing marginal explosiveness and 123rd in the percentage of rushes going for 10+ yards at 10%.  This isn’t just a situation where the production of an explosive back is being averaged among several other non-explosive backs.  Much like Indiana, the Golden Gophers just struggle to generate big plays on the ground.  Minnesota is led by a pair of freshmen backs in Bryce Williams and Mohamed Ibrahim.  Williams has an explosive rush rate[ref]The percentage of rushes going for 10+ yards[/ref] of 9% and Ibrahim sits at 8%.  In fact, Williams hasn’t even had a rush of 20+ yards on 86 carries.  The Indiana defense is 47th in marginal rushing explosiveness and 43rd in explosive rush rate at 10%.

These two teams are great at not finishing drives on offense and both bending and breaking on defense.  Indiana is 118th nationally at 3.83 points per scoring opportunity and Minnesota is 120th at 3.80.  If you like field goals, fumbles, and failed fourth downs, this game is for you!  But wait, there’s more!  Because both teams struggle to hold opposing offenses, at worst, to a field goal attempt.  Indiana is allowing 5.29 points per scoring opportunity, 118th nationally and Minnesota is 115th at 5.19.  Something has to give.  Despite Indiana frequently having as many or more scoring opportunities than their opponent, too often the opponent has finished their drives more successfully than IU.