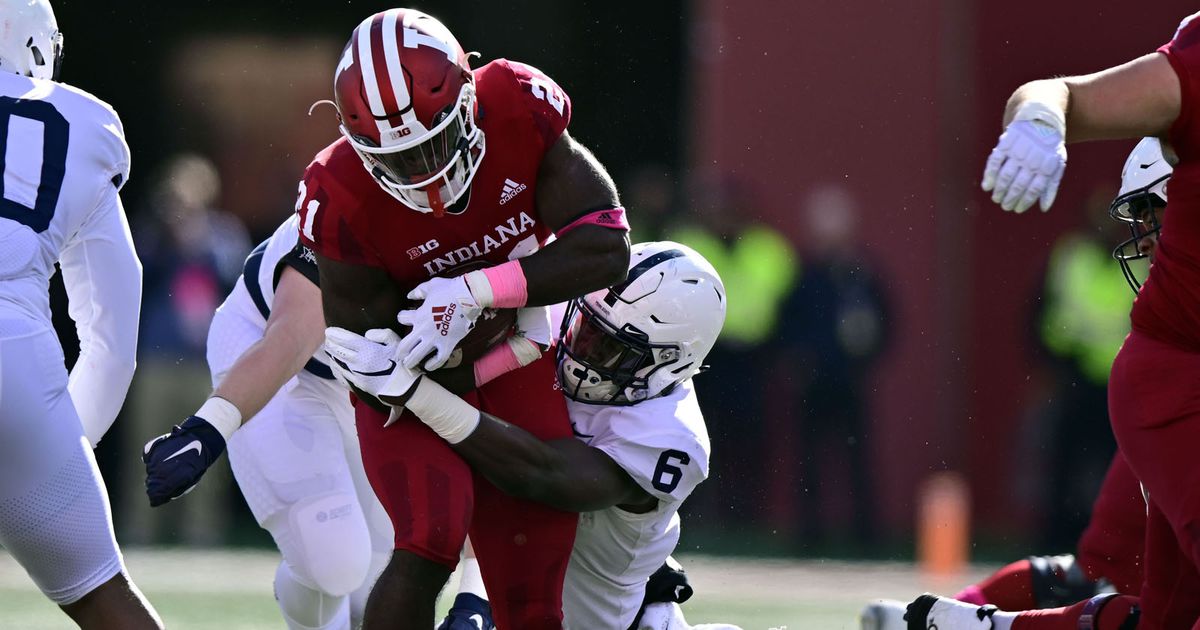 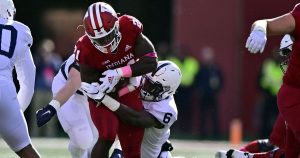 An offense that looked fairly listless against the Hawkeyes showed signs of life against Penn State. Of course, one very important “sign of life” from the Penn State game, true freshman QB Michael Penix, is now lost for the year to a torn ACL. Because we can’t have nice things. 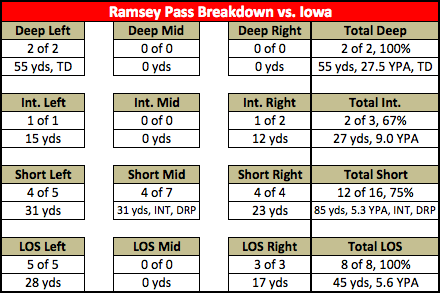 Ramsey’s pass chart from the Iowa game looks a little better than his actual performance. Sure, he only missed only pass that traveled more than 10 yards downfield, but (1) that incompletion was on a 4th down in Iowa territory where Ramsey forced the ball to a covered J’Shun Harris when Peyton Hendershot was uncovered and could have easily picked up the 1st down, and (2) Ramsey only threw five passes that traveled more than 10 yards downfield, in a game in which IU was trailing and needed to score quickly for at least a half. The truth is that if a QB completed all of his deep passes[ref] More than 20 yards downfield[/ref] and 80% of all passes beyond 10 yards downfield[ref] Deep and “Intermediate” or “Int.” passes in the chart above[/ref] in a single game, that QB is either (a) Patrick Mahomes or (b) a QB that needs to throw more passes downfield. Ramsey also threw a costly redzone interception early in the 4th quarter when IU had a chance to cut the deficit to 12. On the bright side, Ramsey threw a beautiful deep ball to Ty Fryfogle for a TD in the 2nd quarter. I sound like a broken record at this point, but he needs to throw passes more like it.

Pass protection against Iowa wasn’t terrible. A 22% pressure rate is on the high side of acceptable against a D-line 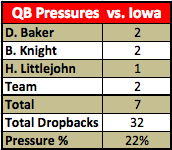 like Iowa’s, especially when you consider the game situation, where IU was in throw-mode for the entire 2nd half. That said, Iowa only blitzed 7 times on IU’s 32 drop backs and never brought more than 5 rushers. You would like to see the O-line hold up a little better against what was almost always a 4-man rush. 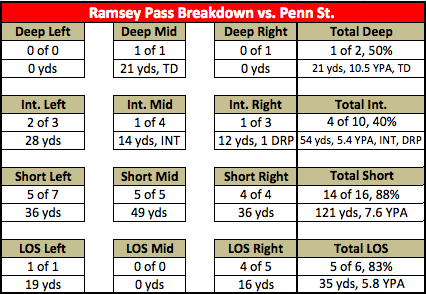 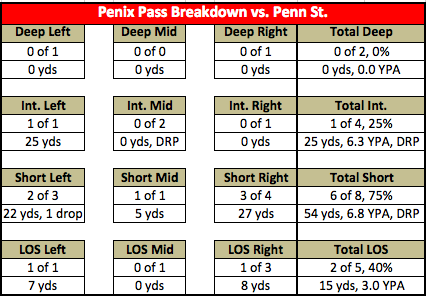 Like Ramsey’s Iowa passing chart, Michael Penix’s passing chart against Penn State is deceiving. While his passing chart suggest a fairly pedestrian day, Penix looked anything but. One of his two deep incompletions was a missed pass interference on Donovan Hale. One of his intermediate incompletions was a drop by Hale on a slant. On a day when the wind was playing havoc with passes, Penix’s throws were, as Todd McShay described them, “cutting through the wind.” If he had played for the last 1.5 quarters of the 2nd half, it is likely he would have hit a few more intermediate and deep passes. Unfortunately, the ACL tear he suffered in the 3rd quarter means we’ll have to wait until 2019 to see more from Penix.

Ramsey’s performance against Penn State was essentially par for the course. He was accurate and effective on short passes, but he struggled to complete intermediate passes in the wind, and he only attempted two deep passes all day. His interception wasn’t really his fault – he had to force a throw on 4th and 10 late in the ball game and the pass bounced off Timian’s outstretched hands.[ref] I didn’t count it as a “drop” because it would have been an incredible catch, but it was still somewhat unlucky for Ramsey.[/ref] Ramsey’s lone deep completion was a well-placed post route to J’Shun Harris in the middle of Penn State’s soft zone for a TD that brought IU back within 1 score. It also came on a play that Penn State had jumped offsides and Ramsey realized he had a free play.

If this game confirmed anything for me, it is that the disparity in arm talent between Penix and Ramsey is simply too big to ignore. For a program like IU and specifically an offense like the current IU offense, next-level tools must be utilized because there simply aren’t that many of them. Penix appears to have a next-level arm. With some level of participation in spring practice and another fall camp under his belt – and assuming he’s healthy – I expect Penix to be named the starter going into the 2019 season. 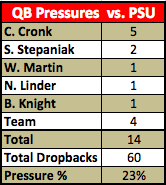 IU’s pass protection chart is, again, misleading. The Hoosier line allowed only 4 pressures in 30 1st half dropbacks, good for a 13% pressure rate. In the first 5 possessions of the 2nd half, the line allowed just two pressures on 14 dropbacks, a 14% pressure rate. In IU’s last two possessions, a combination of fatigue and a defensive line that knew IU had to pass wreaked havoc. In 16 dropbacks during those possessions, Penn State generated pressure 8 times. Coy Cronk alone allowed 3 pressures during those possessions. The takeaway: while the IU offense remained balanced, this offensive line protected the QB very well.

The rushing stats against Iowa are a little skewed by the game situation. By the time the offense got the ball in the 3rd quarter, IU trailed 28-10, which rendered the offense pass-heavy for the entire 2nd half. Nevertheless, IU

didn’t exactly set the world on fire on the ground in the 1st half. Six carries for 15 yards on runs between the tackles just won’t get it done, even against a defense of Iowa’s caliber.

College football being college football, IU looked completely different one week later. Against a Penn State defense that is not as good as Iowa’s but is still plenty talented, IU rushed for 198 yards and two TDs on 32 runs between the tackles, good for 6.2 YPC. While I don’t have anything specific to back this up, I’d hypothesize that teams that run between the tackles that effectively win 80 to 90% of the time at least. Sigh.

For as strong as Stevie Scott ran on Saturday, I was fairly surprised that when I finished by review, I had only 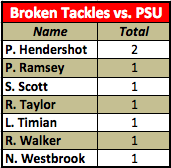 credited him for one broken tackle. If I counted “defenders dragged” or “dudes run over who somehow managed to bring Stevie down,” the numbers would be high. Put differently, I expect Scott’s yards after contact total to be quite impressive, even without making many Nittany Lions miss.