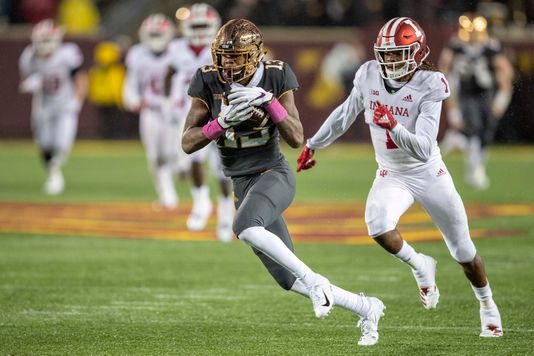 There was a football game over a week ago.  You might have forgotten.  I’m not here to remind you, only to dole out points.

After allowing Minnesota to score on 5 of their first 6 drives, Indiana found themselves down 22 late in the 3rd quarter.  We reached peak Twitter.  Then Indiana started a possession with 13:55 remaining in the game.  Two plays later, Donovan Hale was in the endzone.  This started an epic IU run culminating with Indiana tying the game with 3:55 remaining.  After forcing a punt, Indiana took over with a chance to win it.  Unfortunately, the Hoosiers were not able to pick up the first down following 3 straight Stevie Scott runs.  I saw some discontentment with the failed run on 3rd and 1, but I don’t really agree.  Scott has a season stuff rate (meaning a loss or a no gain) on just 11% rushes.  Had it been a rush with anyone else, including Ramsey, I’d agree.  But I think I trust Scott to pick up 1 yard, despite the line, just as much as Ramsey in the air, despite his love of short passes.  The execution just didn’t work.

Indiana was sitting on a passing down run rate of 29% through 3 quarters, but with a big deficit the last period was pass-heavy.  Overall, Indiana ran on 4 of 19 passing downs finishing with a 50% success rate.  Stevie Scott had a 14-yard rush on 2nd and 10 and Ronnie Walker added an 11-yard rush, also on 2nd and 10.  However, for the season Indiana has just a 21% rushing success rate on passing downs.

On Indiana’s final drive, Coughlin sacked Peyton Ramsey forcing a fumble that ended the game.  It was Minnesota’s only sack of the game and on 45 pass attempts (plus the sack), ends up being a 2.2% sack rate.  That isn’t bad given the number of pass attempts, it just came at the most inopportune time for Indiana.  Up next is a Maryland team that hasn’t recorded a sack in their last 3 games.

Indiana actually had 4 rushes of 10+ yards in the first half, despite falling behind.  Stevie Scott had 3 of them and Ronnie Walker added one.  That would be it for Indiana as Minnesota’s Shannon Brooks took over the explosiveness in the second half.  Brooks was making his season debut following an ACL injury in the spring.  He put up 154 yards on 22 carries, including 4 that went for 10+ yards.  He actually injured his other knee in this contest, ending his season.  Bryce Williams had 7 carries for 17 yards, none going for more than 5 yards.

Somehow Indiana lost by 7 to a team that lost by 24 to Illinois last weekend.  That is all.