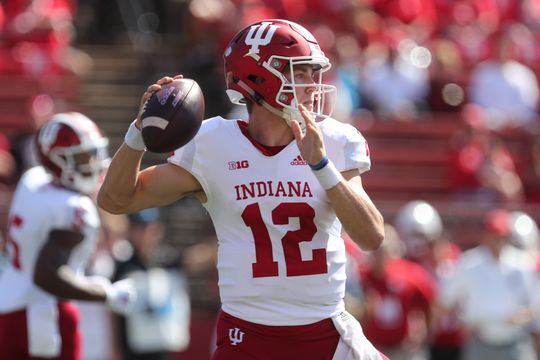 A year ago, we took a look at Peyton Ramsey’s 2017 performance and considered what he might need to do to improve in 2018. Now, the question is whether Ramsey actually did any of those things.

To start, have a look at Ramsey’s conventional stats, both totals and per game1:

So…not a ton of evidence of improvement there. Nearly the exact same completion percentage, only a .3 increase in yards per attempt, a slight decrease in TDs per game, and a slight increase in INT per game.

But we wouldn’t exist as a site if we stopped there. Looking only at non-garbage time, the chart below-left shows what percentage of Ramsey’s throws traveled each distance. As a reminder, “LOS” = ball thrown at or behind the line of scrimmage, “Short” = ball thrown 1-10 yards downfield, “Int” = ball thrown 11-20 yards downfield, and “Deep” = ball thrown 21 or more yards downfield. The chart shows that Ramsey actually threw more deep and intermediate passes in 2018, at the expense of short throws. In theory, this should have resulted in more TDs, a higher YPA, a lower completion percentage and probably more INTs. As the chart on the right shows, that was partially right. The INT % increased a bit, but TD % percentage actually decreased, and we know from the chart above that Ramsey’s completion percentage ticked up by a percentage point, despite his receivers dropping more passes in ’18.

The case for Ramsey’s improvement in the passing game pretty much starts and ends with his deep throws. He did very little of it in 2017 and wasn’t particularly effective. In 2018, his YPA of 12.1 is a little lower than it probably should be – it suggests a bunch of the “deep” completions just barely cleared the 20-yard threshold – but the completion percentage of 40% isn’t crazy for these types of passes and the 11:1 TD/INT ratio is stellar. Ramsey’s 17 YPA and 5 TDs in just 21 passes (with no INTs) on deep passes to the right is particularly strong.

Outside of that, it becomes harder to find evidence of improvement. Ramsey’s intermediate passing was a major weakness in 2017; it improved slightly but remained a fairly glaring weak spot in 2018. One odd thing: on intermediate throws to the right side of the field – the same direction to which Ramsey had great success throwing deep passes – he completed just 37% of his passes for 6.8 YPA with 3 INT and no touchdowns. Woof.

On short throws and throws at or behind the line of scrimmage, Ramsey actually seemed to regress. On short throws, his TD/INT ratio went from 3:1 in 2017 to 6:5 in 2018. Add in LOS throws and the ratio drops to 6:6. While his completion percentage ticked up a bit in the short category, his YPA dropped from 6.1 to 5.7. Of course, his receivers didn’t do him too many favors here – take away the seven drops on short passes and Ramsey’s completion percentage would climb to 80% and the YPA would probably climb back above 6.

To conclude on the passing front, presumably by design, Ramsey threw more down the field in 2018. On throws that traveled more than 20 yards down the field, that was generally a good thing (although truly big plays in the passing game were few and far between, as evidenced by the pedestrian YPA). On intermediate throws, the results remained just about as disappointing as in 2017. As I’ve said before, intermediate throws are usually the ones that require the most arm strength. It’s not a coincidence that Richard Lagow, who possessed a cannon for an arm and not much else, consistently had good intermediate numbers. Ramsey simply does not have and will not develop that sort of arm strength. Perhaps most troubling was Ramsey’s regression on shorter throws, which need to be his bread and butter. For Ramsey to be a successful B1G QB, his decision-making on throws under 10 yards needs to be something close to flawless. It was not in 2018.

But of course, passing isn’t the only thing Peyton does. He’s also shown himself to be a capable runner, if not a true dual-threat. In fact, with the possible exception of deep throws, Ramsey’s running may constitute his biggest year-over-year improvement.2

Both in designed runs and scrambling, Ramsey was demonstrably more effective in 2018. He also forced 18 missed tackles in 2018, second on the team behind only Stevie Scott. Ramsey’s improved strength and athleticism clearly helped him on the ground. He will never be a dual threat in the Randle El or Kellen Lewis mold, but he is more than capable of keeping a defense honest on zone reads, and he’s shown improved instincts on when to scramble from the pocket.

So what does all of this mean for 2019? Most importantly, Ramsey is playing for a new offensive coordinator, Kalen DeBoer. It’s difficult to discern how much of the apparent stagnation in Ramsey’s passing ability can be attributed to Mike DeBord’s coaching/system and how much is simply the manifestation of Ramsey’s physical limitations. In truth, it’s probably a little of both. The bull case for Ramsey in 2019 is a more creative system and better play caller lead to more big plays down the field and more open receivers on short and intermediate throws who can turn 6-yard passes into 25-yard gains. If Ramsey can combine the deep throws of 2018 with the interception avoidance of 2017, along with a better system, we could conceivably see a jump in his numbers.

On the other hand, the bear case is right there in the charts above. It’s entirely possible – perhaps even likely- that what we have seen already from Ramsey is what we will see again in 2019, regardless of who is designing the offense or calling the plays. You might think of him as college football’s Mike Leake. Some of you may recall that MLB pitcher Mike Leake was drafted in 2009 and started pitching for the Reds at the beginning of the 2010 season having never pitched in the minors. The immediate assumption for someone making that jump is that they must be an uber-prospect. Not so for Mr. Leake. Mike Leake was fully developed after his college career and was capable of pitching in the bigs quickly, but there wasn’t much projection or upside left in him. He’s more or less remained at that same level for the last decade – a decent starting pitcher but not much more. Similarly, Ramsey came to college as a more polished and mature player than some; son of coach, played for a big high school program in Cincinnati., etc. His physical tools and technique were well-developed. It just might be that he’s already arrived at his ceiling. Sure, his athleticism has improved, as evidenced by his improved running stats, and he seems to have developed a better feel for the deep ball, but he also showed some questionable decision-making, and his intermediate throws are not B1G-caliber.

Over the next several weeks, it will be up to Coach DeBoer to determine if there is more he can mine from Peyton, or if DeBoer’s first IU offense would be better served by letting one of the younger, more physically gifted QBs take over. I do not doubt that Ramsey can competently run DeBoer’s system, and that DeBoer’s offense, with Ramsey at the helm, can improve upon IU’s offensive output in 2017-2018. The question is whether the offense has a higher ceiling with Penix or Tuttle running it and whether pursuing that higher ceiling is worth the inherent risk of playing an inexperienced QB.

While there’s no clear, easy answer here, I think we can all agree we feel better knowing that the question will be posed to Kalen DeBoer and not Mike DeBord.