Football season is upon us.  Which means it is time to pull out the schedule to start projecting wins.

As I mentioned in the 2018 preview, the fallacy many fans fall into is using a best-case scenario to project what they think will happen.  Anyone reading this is most likely either a fan of Indiana football or a Russian bot.  We want Indiana to do well.  Projecting Indiana to have a disappointing season isn’t fun.  So we tend to be over-optimistic.

This error usually occurs in a variety of ways:

Indiana will win all their winnable games.

These I have classified as games that Indiana has an expected win percentage of 67% or more.  These are games that Indiana is not only a favorite, but possibly even a heavy favorite.  Last season Indiana had just 2 winnable games on their preseason schedule, FIU and Ball State.  They obviously won them both.  In fact, prior to the season (using S&P+), they had a 64% chance of winning both.  It was likely they would win both, but far from guaranteed.  Just 2 seasons ago, Indiana had a 73% preseason chance of beating Purdue.  But then Purdue exceeded expectations and Indiana did not.  What was a preseason winnable game turned out to be a loss that kept Indiana under 6 wins.

Indiana should steal at least one big upset

These I have classified as games that Indiana has an expected win percentage of 33% or less. Sure, the Hoosiers have played the elite of the Big Ten tough in recent years.  There have been overtime losses to Michigan.  The close comeback loss to Penn State last year.  The 2015 Zander Diamont Ohio State game.  But in the past 6 seasons, Indiana has just 2 wins against the top tier of the Big Ten East.  They beat a 7-5 Penn State team in 2013 and a 3-9 Michigan State team in 2016.  It’s just a difficult task for Indiana to even win one of these games in a given season.

Indiana will win more than 50% of their toss-up games

This error is most common when there are an odd number of toss-up games because you can’t split the difference.  For example, the 2017 season had 3 toss-up games: Virginia, Michigan State, and Maryland.  An optimistic fan would assume 2 wins, most likely Virginia and Maryland.  However, Indiana won just 1 of these 3 games.  Last year Indiana had 6 toss-up games making 3 wins the safe bet.  Indeed, they won half. 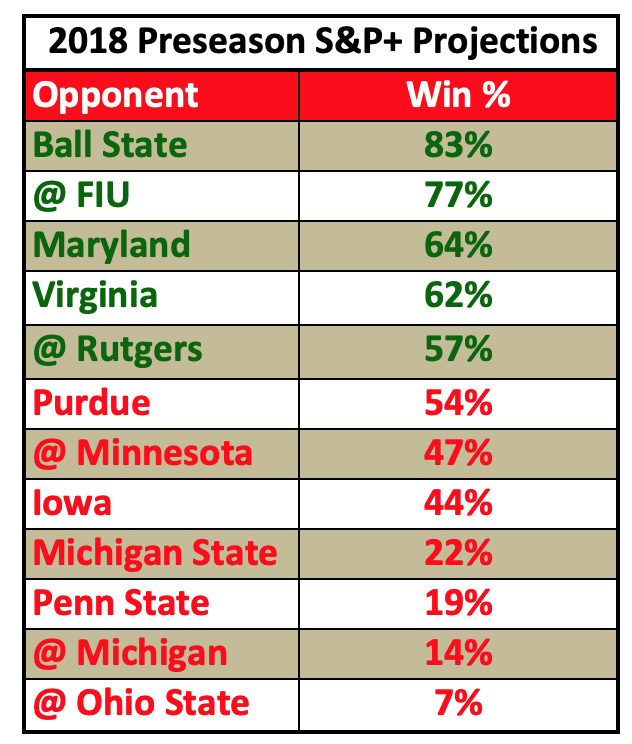 Taking a glass half-full approach to each of these categories independently generally leads to an over-inflated win total.

Looking back to preseason 2018, S&P+ had Indiana projected for 5.5 wins.  They were right on the cusp of a bowl game.  But while they took care of business in the winnable games, they didn’t overachieve in either the upset or toss-up categories.

Back to this season where optimism is running high in Tom Allen’s third season.  In fact, S&P+ has the Hoosiers projected for 6.7 wins. You round up, it’s a bowl.  You round down, it’s still a bowl.  Things are looking good.  But let’s take a closer look.

There are 4 on the schedule this year and, oh boy, are they winnable.  I’m not sure I can remember 4 opponents as poor as these 4.  In fact, Indiana has a 71% chance of going 4-0 against this set and is projected for 3.7 wins.  If there was ever a time to disregard the fallacy that Indiana will win all their winnable games, it’s here. 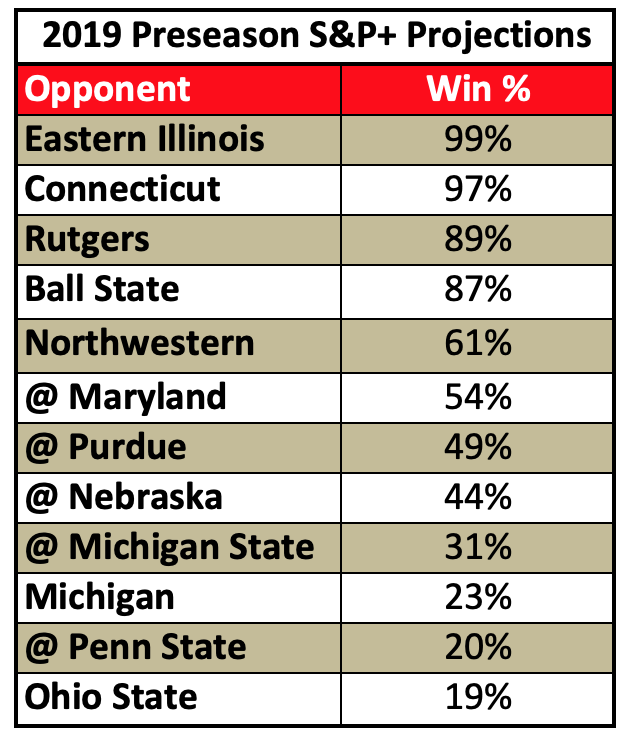 There are 4 games classified as potential upsets.  Taken collectively, Indiana has a 65% chance of winning at least 1 game from this group and is projected for 0.9 wins.  The best chance for an upset would be the game at Michigan State at 31%.  Even if they lost that game, there is still a 50% chance of beating at least 1 of Michigan, Penn State, and Ohio State.  That’s according to the projections.  Personally, it’s hard to take that bet.

The middle tier of the Indiana schedule breaks out with Northwestern at home and 3 road games.  According to S&P+, Indiana should win 2.1 of these games.  Obviously the smart money is on half.  But a lot could go wrong.  Northwestern always seems to exceed on-paper projections. Purdue lost a lot but still has Jeff Brohm and Rondale Moore.  It wouldn’t surprise anyone if the Old Oaken Bucket was also a de facto bowl play-in game.  And then there is Nebraska with a 44% chance of IU victory.  But much like Purdue in 2017, what happens if Nebraska exceeds their projection?  Would that shock anyone in Scott Frost’s second season?1   While the odds are Indiana will win 2 of these, it sure makes me nervous.

For one, Indiana has closed to gap to the 4 elite teams.  Indiana averaged a 16% chance of victory in the 4 upset games last year to 23% this year.  As a result, they’ve gain 0.3 projected wins in this area.  However, closing the gap and actually getting over the hump are two totally different propositions.

The more important factor is the shift of 2 games from toss-ups to winnable.  And not only do we get more games in which Indiana should be favorites, but they are even bigger favorites in each of those 4 games leaving more margin for error.

However, unless Indiana can pull off an upset, this season, like so many others, comes down to the toss-up games.  Can Indiana get the 2 wins that they are projected?  We might not find out until the last day of November.