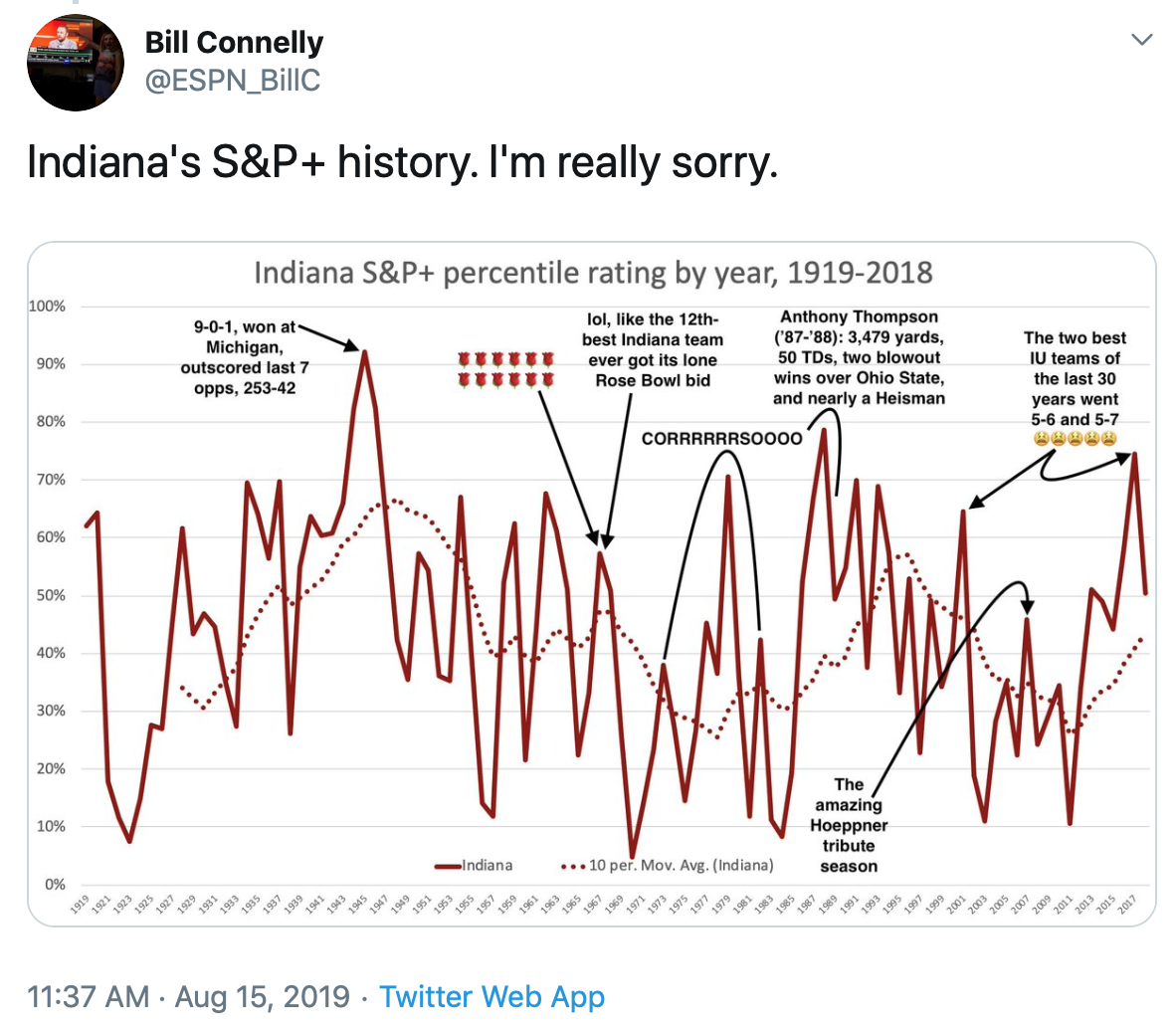 You’ve likely heard the expression “timing is everything”.

For something to truly succeed, it takes both a good idea or organization plus good timing.

The same is true in sports.

And it is especially true at Indiana, a program whose success is few and far between.

Recently Bill Connelly has posted each program’s S&P+ history by year.  Essentially it shows what percentile, compared to the other teams in that year, that a specific program ranked.  If you look at Indiana, you’ll notice there are a few peaks, nice runs in the 40s and 80s, but a lot of sub-50 percentile teams.

A couple things stand out.

“lol, like the 12th-best Indiana team ever got its lone Rose Bowl bid”

From Dan Jenkins’ great article after the 7th game of the season: “the Hoosiers have not exactly overpowered the class teams of the nation. In fact, all of the poor Wisconsins on its schedule have a combined record of 12-34-3 which, as statistics go, rates up there with Germany’s record in world wars. Moreover, Indiana has barely beaten six of its victims, resorting to some of the most self-torturing climaxes since radio serials.”1

They played just 3 teams that finished with a winning record all season (including USC in the Rose Bowl), losing 2 of them.  The combined winning percentage of the 8 teams they beat was 35%.  No doubt this was a good Indiana team.  They still had to beat a Purdue team that was ranked 3rd in the nation on game day.  But it converged with a schedule that made the Rose Bowl possible.

For Indiana to do well, to have a breakthrough season, requires at least a good team plus a forgiving schedule.

The “darkest day in Ohio State football history”, the 1987 victory over then #9 Ohio State, was huge.  But ultimately that Ohio State team wasn’t that good and finished with a 6-4-1 record.  They were 4-6-1 the following season when Anthony Thompson and the Hoosiers beat them 41-7.

On the flip side, there are several examples of good IU teams that just ran into an unfavorable schedule. The 2017 is a prime example.  Per S&P+, it was Indiana’s best team since the late ’80s.

They shouldn’t have lost the Maryland game that season.  That’s on the team.  But their other 6 losses came against teams with a combined 76% winning percentage.  It was a brutal schedule.

Unfortunately for Indiana in the Big Ten East, more often than not, it will be a brutal schedule.  Until something changes with the conference, Indiana will not only have to improve themselves, but hope for struggles at Ohio State, Michigan, Penn State and Michigan State.  They’ll have to hope Maryland is not able to overcome coaching with recruiting.  And they’ll continue to thank Jim Delaney for adding Rutgers.

Recently, even times when the top teams in the Big Ten have struggled2 has not coincided with a favorable time for Indiana.

From Bill Connelly: “if Team A’s S&P+ rating is plus-19.0, that means it is 19 points better than the average college football team. If Team B’s rating is minus-12.0, it is 12 points worse than average. And if Team A and B were playing on a neutral field, you could determine that S&P+ would favor Team A by 31 points (19 minus minus-12).”

The charts below look at the S&P+ ratings for Indiana and their opponents as well as the final S&P+ spread between the teams assuming a neutral field.  A spread with a light red color represents an IU loss, light green represents a win,3 and white represents a year the two teams didn’t play.

In the past 14 seasons, the Buckeyes have won at least 10 games in 13 seasons.  The lone exception was transition season between Jim Tressel and Urban Meyer where they were just 13.2 points better than an average team.4  Indiana might have had a chance against the Buckeyes, but that 2011 season just happened to be the 1-11 Kevin Wilson debut season where IU was a brutal 16.9 points worse than the average team.

The 2010 season represents Penn State’s worst team in the last 14 years per S&P+ but also came during the below-average Bill Lynch era.  Fast forward to the 2013-2015 “Penn State under sanctions” seasons, Indiana had improved under Wilson to the point where the gap was the smallest it had been.  The Hoosiers won convincingly in 2013.  The next season, with the game coming after the Sudfeld injury, IU lost 13-7.

If you look at the 3 worst Spartan teams (2006, 2008, 2016), Indiana went 2-1 in those games.  That’s good.  In between, however, saw a huge rise under Mark Dantonio including 3 Big Ten titles, a Rose Bowl victory, and an undefeated record against Indiana.

There’s no doubt Indiana has improved over the last half decade.  But so often in the past, the struggles of Indiana’s opponents has not lined up during the same time the Hoosiers were surging.

The graph above shows Indiana’s average spread deficit over a 4 year rolling average.  You’ll notice that the spread between Indiana and Michigan State has narrowed.  And if you put up a poll on which of these 4 teams Indiana is most likely to beat in 2019, Michigan State would top the list.  It’s taken an improved IU team and a slide from Michigan State.

Indiana has also cut the gap to Ohio State.  That’s representative of the improvement that Indiana has made.  Unfortunately the Buckeyes were a blue blood powerhouse under Urban Meyer making it difficult for IU to find success against the Buckeyes.  The hope, for Indiana fans, will be improvement under Coach Allen combined with a decline in the post-Meyer era.

The Hoosiers have slid back against both Michigan and Penn State.  Indiana has improved but both those programs have improved more.  Maybe Harbaugh’s shtick wears out eventually but for now I think it is safe to assume that Indiana will have as much difficulty beating Michigan that they do Ohio State.  They are both blue blood programs currently battling for supremacy in the division.  Penn State is probably a better option for Indiana to close the gap.  Two of the four years built into the Penn State rating represents years with Joe Moorhead at OC.  Similar to the Ohio State situation, Indiana fans are hoping for improvement from IU as well as a decline in the post-Moorhead/McSorley offensive era.

The recipe is simple although not wholly controllable.  Improve and hope your opponents get worse.  However, getting those two things to happen in tandem appears as elusive as an Indiana Rose Bowl appearance.