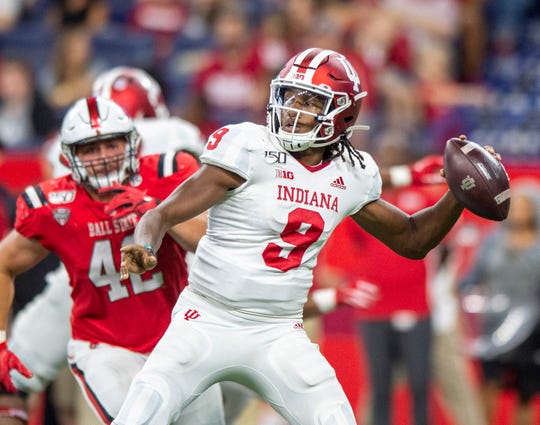 In the starting debut of Michael Penix and the OC debut of Kalen DeBoer, the Indiana offense showed a lot of promise even while not firing on all cylinders.

The defense flashed some potential but was ultimately let down by missed tackles and a couple bonehead penalties.

It was an okay start to the season, but most importantly, it was a win.

The Hoosiers came out firing in the first half with 24 pass attempts plus 1 scramble in 35 plays.  Outside the 2 interceptions, Penix was pretty successful including the long touchdown pass to Westbrook.  In the first half, Penix averaged 9.5 YPA and a 58% success rate on pass attempts.  The second half wasn’t as successful at just 6.1 YPA1and a 38% success rate, but overall it was really strong.  Indiana had their 31st pass attempt midway through the 3rd quarter and finished with 40.2

All four backs saw time on Indiana’s first drive although only Scott and Gest had a carry.  It was actually Cole Gest’s only carry.  Ronnie Walker and Sampson James each only had a single carry as well.  Walker also has seemingly established himself as the third down back.  Meanwhile Stevie Scott took over where he left off in 2018 with 19 carries.  He only gained 48 yards with a 26% success rate so that was disappointing.  But better days are certainly ahead for Indiana’s talented stable of backs.

This would have been even closer at 11.4% had it not been for the drop by Westbrook.  The 10% mark is slightly above last year’s 9.4% mark.  Michael Penix only had 2 passes of 20+ yards, a 75 yard TD to Westbrook and a 22 yard pass to Peyton Henderson, but he showed his mobility with rushes of 11, 15, and 24 yards.  Ronnie Walker and Whop Philyor also added explosive runs.

Indiana held Drew Plitt to just 5.8 YPA in the first 3 quarters.  Aided by some sloppy tackling, the Hoosiers allowed 9.7 YPA in the 4th quarter to finish with a final average of 7.3.  Helping the Indiana secondary was a solid pass rush that also recorded 3 sacks.

Reese Taylor was out with injury so Whop Philyor was the main punt return man.  He returned one punt gaining 11 yards.  Taylor should be back this week against Eastern Illinois and will probably see time at punt returner.

The Hoosiers showed a little rust in this one, winning by just 10 points.  Their largest lead was 14 points.