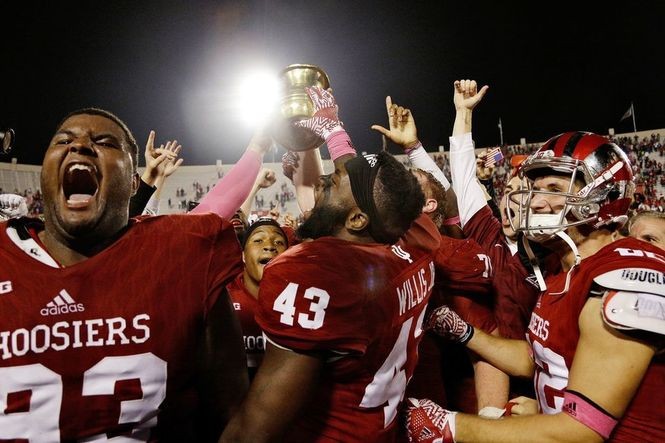 The Hoosiers travel north to face Michigan State for the Old Brass Spittoon.  The Hoosiers are 2 touchdown underdogs, but there’s a sense Indiana could pull off the upset, especially if Michael Penix plays.  The Indiana offense just has a higher ceiling with him on the field and that could be big against a tough MSU defense.

The Spartans have allowed a stingy 2.7 yards per rush play once sacks are adjusted as pass plays. That mark ranks 3rd nationally.  Part of that is 2 botched Tulsa snaps that cost the Golden Hurricane 40 yards.  If you exclude those 2 plays, Michigan State’s rushing yards per play is 3.2 which would rank 10th nationally.  However you slice it, this is a tough Spartan defense which is obviously not a change from how they usually operate.  Indiana, on the other hand, has struggled to rush the ball.  The Hoosiers are averaging just 3.9 yards per rush with a long of 24.  The lack of long runs has been the biggest issue for Indiana.  Their success rate and opportunity rates have been relatively in line with their historical averages, but the explosive runs haven’t come.

Michigan State has 6 interceptions thus far, tied for 5th nationally.  They had 1 against Tulsa, 2 against Western Michigan, 0 against Arizona State, and 3 last week against Northwestern.  Meanwhile, Indiana has tossed 4 interceptions, 2 by Penix and 2 by Ramsey.  The Hoosiers can ill afford to turn the ball over this week.  Last year, Ramsey tossed 2 picks against Michigan State including one on IU’s second drive that the Spartans returned for a touchdown.  That put MSU up 14-0 and deflated the Indiana crowd.

The senior linebacker for Michigan State is coming off a week in which he earned Big Ten defensive player of the week honors.  In the game against Northwestern he recorded 14 tackles, including a sack, as well as an interception.  His 14 tackle game came a week after a 12 tackle effort against Arizona State

The past 3 games for Indiana have involved large leads for one of the teams.  This one should, in theory, be a little closer.  In last year’s matchup, Michigan State jumped out to a 21 point lead before the Hoosiers cut it down to a single touchdown.  That early deficit was ultimately one Indiana couldn’t overcome as Michigan State won by 14.

Justus has scored 32 points on the year making 6 field goals and 14 extra points.  He had a high of 14 in the opener against Ball State and a low of 4 against Ohio State.  Assuming IU can get into scoring opportunities, the leg of Justus might play a big factor if Indiana’s drives stall deep in Michigan State territory.