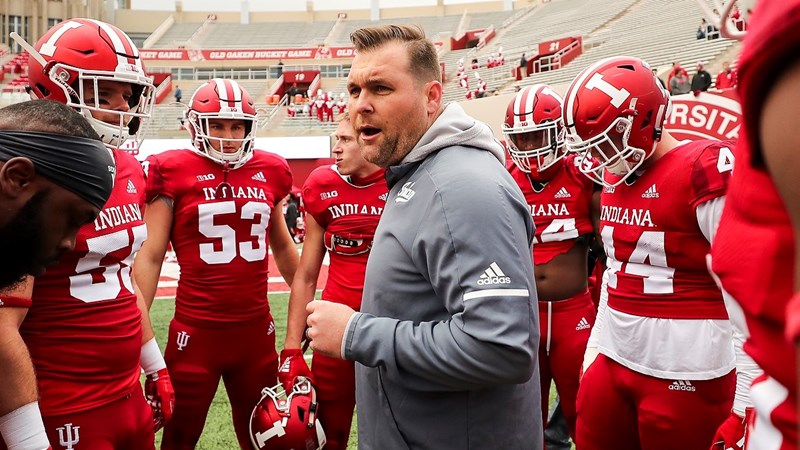 There haven’t been many noticeable differences in IU’s defensive scheme in new defensive coordinator Kane Wommack’s first year at the helm. That stands to reason, as Wommack and Tom Allen come from the same defensive coaching tree – both in the usual, career sense (both coached under and generally employ Dave Wommack’s defense) and for Kane, in the literal sense as well (because, you know, Dave is his dad). Further, Wommack coached under Allen last year as IU’s linebackers coach. That said, there has been at least one significant difference: Kane Wommack has made more frequent use of specialized personnel on passing downs.

While Coach Allen’s defenses occasionally swapped out the Husky for a third corner, this year Wommack has made almost wholesale changes to his defensive personnel on nearly all obvious passing downs. Wommack’s usual passing down personnel is:

This differs from Wommack’s standard down personnel in a few ways:

In theory, this personnel should be much better in pass coverage than the standard defense. Four corners are on the field (even though one of them is playing safety), with five defensive backs in total. The linebackers are IU’s best at playing in space.

Through four games, how has it done in practice? The jury is still out. Excluding Eastern Illinois (we always exclude FCS opponents from our numbers) and garbage time against Ohio State and UConn (essentially the 2nd half of each game), we only have about three full games of data. That’s not enough to draw any meaningful conclusions. But we’ll go ahead and draw some semi-meaningful conclusions anyway.

As the chart above shows, IU’s total success rate1 on passing downs2 is slightly better this year than in 2018, but isn’t as good as in 2017. Focusing strictly on passing plays on passing downs, the gap between 2019 and 2018 grows a bit, while on running plays, the 2018 defense is better. This stands to reason because a defense involving more corners is necessarily going to be weaker against the run. Interestingly, the 2019 defense is significantly better than 2018 when blitzing on passing downs (rushing 5 or more), while it is significantly worse than 2018 when it rushes 4 or fewer.

Those struggles, however, are no reason to scrap this personnel or even dial it back. Putting more coverage skill on the field in situations where the offense is likely to pass is tactically sound and is quickly becoming standard operating procedure in college football (and already is the standard in the NFL). That Coach Wommack implemented this change is a credit to him. That said, there are some possible tweaks that could make a difference. First, I would put an end to the Marcelino Ball-as-DE experiment. I understand the thinking behind it – Ball is one of the best athletes on the defense, and while Kane wanted to replace him with a nickel corner for coverage purposes, he didn’t want to take him off the field entirely. And I suspect that Ball showed some promise in practice at that spot. Unfortunately, it has not translated to games. Ball has not recorded a QB pressure as a DE (or at all) in 2019. His speed advantage over O-linemen hasn’t translated to pressure, and his strength disadvantage (and likely lack of developed pass rush moves) has worked against him. I would much rather see a true DE on the field, who actually has practiced and developed pass rush skills.3

In fact, I would like to see James Head, Michael Ziemba, and Allen Stallings all on the field for passing downs, with Jerome Johnson as the only true interior lineman. Head could easily slide inside in this scenario. That DE trio has tallied 14 pressures so far in 2019, and Johnson has 6. Why not maximize their opportunities? Having four true DL on the field probably also positively impacts run defense in the rare instance when the opponent runs the ball on a passing down.

Armed with this knowledge, it seems a little inefficient to limit Tiawan to matching up with whomever the opponent happens to line up in the slot. In 2016 during Rashard Fant’s senior season, then-DC Allen occasionally matched Fant up with the opponent’s best receiver on passing downs, regardless of where that receiver lined up. I don’t think it’s too early to deploy the same tactic with Mullen.

Very little of this should matter on Saturday against Rutgers, but as we look ahead to matchups with decent or better passing attacks like Maryland, Nebraska, and Penn State4, IU’s ability to defend the pass will loom large. Kane Wommack has the right idea when it comes to specializing his personnel. Now he just needs to continue tweaking, while his players need to improve on the execution front.