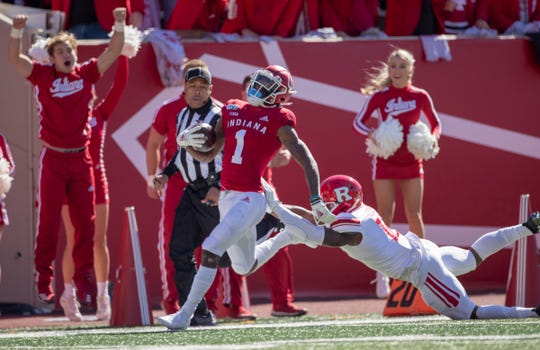 Indiana heads east to face Maryland in an important matchup for both teams in their quest for a bowl game.  This will be the 8th matchup between the schools with Indiana leading the all-time series 5-2.  In fact, for Indiana the games have gone: W, W, L, W, W, L, W so obviously Indiana will win to continue this pattern.  #analysis

Maryland is 113th nationally in passing yards allowed per game at 280 per game.  In their past 3 weeks they’ve allowed 421 to Penn State, 163 to Rutgers, and 420 to Purdue.  Each one of those marks is more than that opponent is averaging on the season.  That’s bad although it isn’t Rutgers passing offense bad.  Indiana, on the other hand, is 17th in the nation in passing yards per game at 303 per game.  Against FBS opponents Indiana is averaging 275 passing yards per game.  Additionally, the Maryland run defense has been solid this year allowing just 3.0 yards per carry.  The Hoosiers may need to lean on their exciting passing offense to generate any sort of offense this Saturday.

The junior receiver has consecutive 100 yard receiving games, the first time that has happened at Indiana since Ricky Jones in 2016.  Now he’ll go for 3 in a row against a generous Maryland pass defense.

Last week the Hoosiers scored early and often.  Even before their first offensive play, the Hoosiers were up 7-0 on a defensive touchdown.  On their 2nd offensive play, the Hoosiers found the end zone and then 5 plays later Indiana scored their 3rd touchdown of the day.  To be clear, we’re looking for the number of Indiana plays before Indiana’s first score regardless of if that score comes via defense or special teams.  We’re just looking for a hot start.

With so many question marks on Maryland’s offense due to injury, it’s hard to know what to expect.  Regardless, when Indiana gets Maryland into passing down situations, they need to stop them.  While Indiana has been completely average this year allowing a 31% success rate on passing downs, it’s a tale of two cities.  Against Ohio State and Michigan State, Indiana was atrocious.  It wouldn’t have mattered against the Buckeyes, but played an important factor into Indiana’s loss in East Lansing.  However, Indiana’s season-long mark ends up being average due to two dominant performances against two terrible offenses in Connecticut and Rutgers.  Whether it is Josh Jackson passing or Tyrell Pigrome scrambling, Indiana cannot allow Maryland to extend drives after putting them into a passing down.